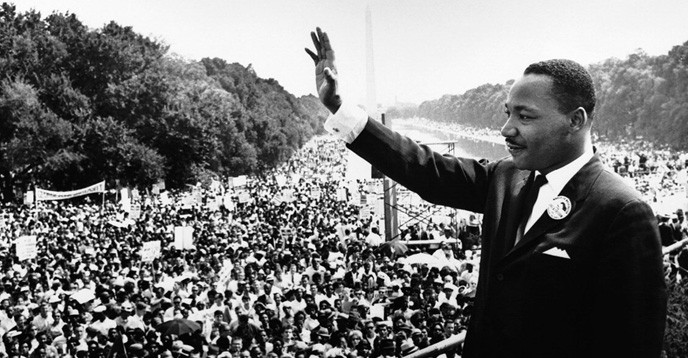 Martin Luther King Jr., August 28, 1963, at the foot of the statue of Abraham Lincoln, rallying point of the great march on Washington for work and freedom

Martin Luther King was not a dreamer, but he knew how to inspire people to dream, and he sacrificed his life so that the dreams of hundreds of thousands of people around the world could be fulfilled. An international figurehead in the struggle for human rights, he extended the scope of his action from antiracism to economic and social justice.

It was not a simple dream. Not a dreamer’s dream, but the expression of a desire to act on how things were. A productive dream, a command to make the present time move. From someone tied to action and making it happen. It was in the here and now that he imposed his dream on the world, on his nation, yes, today. “I have a dream today.” Do not forget the “today”. This chanted hexasyllabic verse rises in four feet and falls in two, as distinct and definitive as the auctioneer’s hammer closing the bids.

Then it is no longer a question of waiting, as some advocated, even in the progressive camp. Shortly before, Martin Luther King had started writing a book entitled Why We Can't Wait, a book published in 1964 in which he developed the answer he had given in his Letter from Birmingham Jail (April 1963) to the clergymen who asked him to take it slowly, and chided him for his inopportune activism.

He published an excerpt, entitled “Why the Negro won’t wait”, in the Financial Post, a month before that famous day of August 28, 1963 when, at the foot of the statue of Abraham Lincoln, rallying point for the great march on Washington DC for jobs and freedom, he delivered his speech now known as “I have a dream”.

The date of this march on Washington was not chosen arbitrarily. It was the year of the 100th anniversary of President Lincoln's declaration of the abolition of slavery. Yet the Southern states continued despite their defeat – due in part to the freed slaves who rallied to the Northern cause – to impose racial segregation. It had been negotiated with their conquerors on the basis of the infamous phrase “separate but equal”. It allowed them to enact unjust laws to the detriment of black people.

No, Martin Luther King was not a mild-mannered dreamer. He demanded quite simply that the American Dream no longer be the nightmare of black people, that the American ideal promised by the founders of the nation be finally fulfilled.   MLK's dream contradicted the reality of facts and the idea Americans had of their nation.

Oh no, he was no dreamer. He knew how to use dream machines and industries to win hearts and minds. He who had sung outside the film theatre at the premiere of Gone with the Wind, but was not allowed inside because he was black, was able to rally to his cause the bright stars of Hollywood at the foot of Lincoln’s statue. He was a child of Atlanta, the city “too busy to hate”, headquarters of Coca-Cola, CNN and other major media companies, a city that invented modern commercial communication based on the calibrated and commodified “dream”. He soon grasped the inner workings of this industry and used them successfully to benefit his struggle, both in its purely economic dimension and in the deliberate management of images.

Through the ‘American way of life’ televisions sets beginning to adorn every living room, he was able to rip apart a waking dream, held together with bad faith, and bring to the screen the horror of the brutalities committed against black people in the South. Images versus images. And in the river of his speech, they clatter like black and white pebbles rolling along the course of history.

But while the mastery of language, poetry and song is a weapon that can overturn awareness, he realized early on that to achieve this end, it was necessary to weaken opposing wills by attacking the base from which they drew their strength and support: the economy, a determinant factor in policy-making and sometimes the legal system.

Certainly, as the son and grandson of the pastors of Ebenezer Baptist Church in Atlanta, who were also leaders of the local NAACP (National Association for the Advancement of Colored People), he had absorbed all the social and legal ramifications of this struggle for civil rights. And when he was appointed to the Dexter Avenue Baptist Church in Montgomery, Alabama, one of his first actions was to transform this bourgeois “silk stocking” congregation into a militant, open church of the people, whose members had to keep up with social, economic and political issues. His sermons, which were political and philosophical, did not go from the bottom to the top, seeking to lighten the burden of the present, but on the contrary from the top to the bottom, using thought to illuminate the framework and conditions of present life in order to improve them. 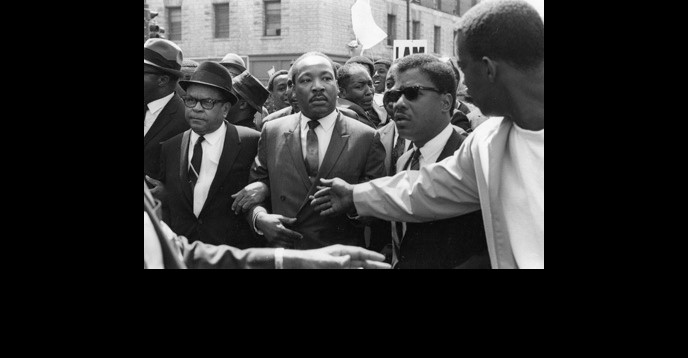 A dream on the march

And so naturally, in 1955, when Rosa Parks was thrown in jail for not having surrendered her seat on a Montgomery bus to a white passenger, people turned to him to lead the fight to defend the rebellious heroine. A legal battle, of course, but which at the same time used economic tactics: a boycott to paralyze the Montgomery city bus company, to bring it to its knees in order to put pressure on the politicians and beyond that, on the legal system. The first battle and the first victory, from which King would draw every lesson for future battles – particularly the decisive one he had to lead in Birmingham, Alabama, undisputed capital of racism and southern segregation, nicknamed Bombingham because of the havoc wreaked by the Ku Klux Klan’s bombs.

It was there he activated the four mainsprings of effective civil disobedience action: economic, legal, political, communication. In 1963, he took advantage of the Easter season, the second biggest shopping season of the year, to throttle the economy; used marches and sit-ins to publicize his demands; staged jail-ins (getting arrested and thrown in prison) to overcrowd the jails and strain the courts and police; and finally, using images and the press, he showed the world the brutality of the police forces led by Commissioner Bull Connor (known as the Bull of Birmingham), assaulting the peaceful and non-violent demonstrators with the fangs of their dogs, fire hoses, boots and batons.

Birmingham was the sharp spear in the battle for civil rights. The dream was on the march. But that dream concealed another reality he would grasp only when he brought the battle north. He understood that formally obtaining the right to vote and all other civil rights, although crucial, was far from being the end of the battle.

When he visited the Watts neighbourhood of Los Angeles in the summer of 1965, when it was aflame with racial riots, he became acutely aware of the magnitude of the problem and wrote the following: “As soon as we began to see our way clear in the South, the shock and horror of Northern riots exploded before our eyes and we saw that the problems of the Negro go far beyond mere racial segregation. The catastrophe in Los Angeles was a result of seething and rumbling tensions throughout our nation…. The flames of Watts illuminated more than the western sky; they cast light on the imperfections of the civil rights movement and the tragic shallowness of white racial policy in the explosive ghettos.”

In Chicago as well as Harlem, he found an advanced state of physical and moral decay due to the fact that 30 per cent of black people were unemployed and idle; that the ghettos, because they contained a captive customer base, encouraged abusive practices in the pricing of consumer goods; and that rents in substandard buildings were often higher than in residential neighbourhoods. He also discovered, and it surprised him, anti-Jewish racism. It was not prevalent in the South’s black population, who often saw Jews fighting at their side, and sometimes even dying for their cause. He then related it to the economic conditions of these ghettos, once bourgeois neighborhoods, where certain landlords and shopkeepers, many of them Jewish, continued to do business by taking advantage of the black population’s marginalized situation.

The problem was indeed economic and social. And he concluded that racism is simply an effect of economic domination.

This brought him back to his Marxist readings and to the fact that already at a very young age he had distanced himself from capitalism.

“I imagine you already know that I am much more socialistic in my economic theory than capitalistic. And yet I am not so opposed to capitalism that I have failed to see its relative merits. It started out with a noble and high motive, viz, to block the trade monopolies of nobles, but like most human systems it falls victim to the very thing it was revolting against. So today capitalism has outlived its usefulness. It has brought about a system that takes necessities from the masses to give luxuries to the [wealthy] classes.”

It was therefore necessary to wage a broader struggle than the mere fight for the civil rights of black people. The fight had to extend to the whole nation and even beyond, because the problems of capitalism and imperialism had the same effects everywhere. He opposed the Vietnam War, to the chagrin of President Lyndon Johnson who, in 1965, had made the Congress vote in favour of the Voting Rights Act, which banned racial discrimination in the electoral process, by proclaiming “the time for waiting is gone”. MLK even found opponents in his own camp regarding this position. But he remained firm. The problem was the domination of the poor by the richest, and the black people’s struggle rejoined the struggle of all poor people, including white ones.

He rallied to his cause the biggest labour unions, and prepared a new march on Washington: the poor people’s march.

The starting point was Memphis, Tennessee with its sanitation strike. The sanitation workers marched down the street hand in hand with Hollywood stars, carrying black and white signs: “I AM A MAN”. King knew he was threatened; he felt his end was near. He ended his last speech at the Mason Temple in Memphis saying “I don't know what will happen now. But it really doesn't matter with me now, because I've been to the mountaintop.”

He was going to die because he had crossed the white line, the line of colours. A white bullet hit him in the throat to silence his beautiful black voice.

More on MLK in the UNESCO Courier

"Like Mahatma Gandhi in India, Martin Luther King in the United States chose the way of non-violence in his struggle against injustice. He too urged his followers to eschew violence at all cost under the slogan "We shall overcome". Like Gandhi, he accepted the dangers of non-violent resistance in his struggle for racial equality. Twenty years after Gandhi, on April 4, 1968, he too was cut down by an assassin's bullet.

"The violence endured by Martin Luther King in thirteen years of campaigning included both physical and moral attacks: he was to be arrested several times, beaten, imprisoned, prosecuted for "incitation to riot" and fraud, accused of treason against America by those who opposed his stance on the Bay of Pigs operation in Cuba and the Viet Nam war (...) He was to be spared no form of attack. But nothing was able to break his resolve to build a new America, the land of the famous "dream" which he described on 28 August 1963, in Washington D.C."

The Courier against racism

Human Rights in the UNESCO Courier

MLK and the Global Freedom Struggle