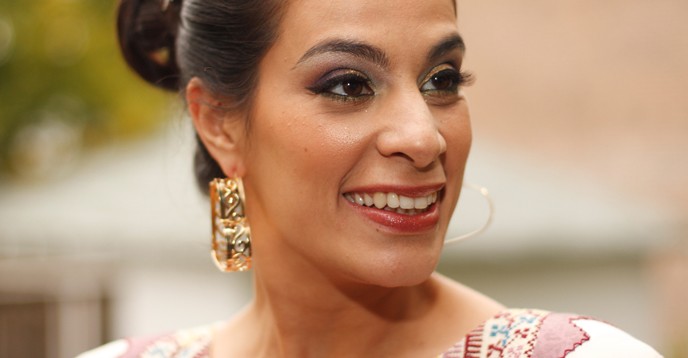 “People with disabilities are the largest minority in the world,” Maysoon Zayid says. Born with cerebral palsy and a great acting talent, she decided to change Hollywood… and the world.

I didn’t realize that I was different from others until I was 16. That’s when people started treating me differently. I knew that I had problems walking, and I knew that I would shake. I am physically disabled, but it did not affect me the way it should have, because everyone treated me just like that. When I was little, people around me treated me as an equal. However, when I grew up, as a teenager, living outside of my parents’ home, at high school, I knew that being disabled was a big deal. When it was time for me to cook, I couldn’t handle knives and boiling water. I realized that people set the table for me.

Your family gave you strong belief that “you can” (do anything). Has that faith grown in you over the years? Could you tell us more about your family’s support?

I believe that if my parents had not sent me to public school, I would not be here today as an advocate for the disabled. I am very lucky that my parents let me receive an education equal to everyone else, and let me do what I love − just as they did with my sisters. I remember the meeting with the principal of my school when I was 5 years old, in kindergarten. He said I couldn’t go to public school, but I had to go to a school for children with Down syndrome. My father sued the school and finally I got the chance to go there.

My parents could not afford physical therapy, so they sent me to attend performance classes. Since the age of 5, I’ve been on-stage, performing. I had a dream that I would go to Hollywood. I love performing. When I get on-stage, I feel unlimited energy. My parents always encouraged me: “You can do it, yes you can can”!

My father is a humorous and brave man and my mother is a strict tiger mother. They love me. However, I want to let disabled people know that even if your family abandons you, it is not the end of the world.

What do you think of the debate about terms such as “person with disabilities”, “differently abled person”, “adaptive person”, etc.?

As a child, I was confident, happy and proud. And in college I felt undesirable and felt like I couldn’t achieve things because people treated me so differently. Now, after I am playing a role in helping others as a disabled female comedian, I would say the best English term to describe us is not “special needs” or “differently abled” − it is “disabled”.

We should say that loudly and proudly, because there is no shame in it. My needs are nothing special. Everyone has different needs. The idea is that the more we proudly use the word disabled, the less shame and fear there is attached to it.

Could you describe the project you have set up to help disabled people?

In 2003, I founded Maysoon's Kids, a charity that hoped to give Palestinian refugee children a sliver of the chance my parents gave to me. I worked with the West Bank to run welfare programmes and training sessions for parents and teachers of disabled children. We supplied them with what they needed: sign-language interpreters, voice-activated computers, social workers, teachers…we did everything we could do to help. The project ended in 2012 because my career no longer allowed me to physically present to help.

When and how did you start your career as a comedian?

On American television, you don’t see people like me. And that’s a problem in Hollywood. People with disabilities are the largest minority in the world. We are the most under-represented in media. We are 20% of the population, but we are only 2% of what you see on American television. Of those 2%, about 95% are played by non-disabled persons! So that means that only 5% of the 2% who appear on television are actually disabled.

Moreover, they are all men, and they are all white. And there’s just no one who looks like me! The one person who comes close is Richard Pryor − he is a comedian, black and disabled. When I saw him, I made up my mind to become a comedian on television.

Since I was 5 years old, I dreamed of being an actress. I went to college to study theatre. But in college I realized that people with disabilities wouldn’t get cast and were less likely to get jobs. And I started to say I’m going to change Hollywood.

In 1999, after my graduation, I found a job as an English teacher at a Christian school during the day and attended comedian shows in the evening. I quit my job, and in 2001, became a professional comedian.

You are widely thought to be the first Muslim woman comedian in the United States. Do you see laughter as a remedy?

Presenting comedy is much harder than acting. A comedian writes and acts by himself or herself. He or she has to take all the responsibility if the comedy fails.

I have been told that every time a comedian gets off a stage, their energy is drained and some suffer from depression. I never suffer that way, because my life is not only about comedy. I am very attached to my family and friends.  I am dedicated to fighting for the rights of people with disabilities and I am dedicated to fighting violence against women. I have so much work to do.

Is there a special moment that changed your life?

My TED talk in 2013 literally transformed my life. After it, I received messages from millions of followers from all over the world. It gave me power. At least 20% of the emails were heart-breaking for me. Some people, ranging in age from 12 to 50, talked of wanting to commit suicide. What they need is someone to say they have worth and can be loved.

I started to see how much violence disabled people face and how hard it is for them to get an education. I had thought it was just an “Arab thing” and did not realize it existed everywhere. This reinforced my belief that my mission is to link TV with films, YouTube, etc., to create positive images of disability.

After the September 11 attacks in the US in 2001, Muslims and Arabs were portrayed as being terrorists, violent, and oppressing women. It is hard to be a Muslim, in such circumstances, but not harder than being a disabled woman. Being a disabled woman is much harder because we are constantly victims of violence. In the US, women with disabilities are three times more likely to be attacked or assaulted than others because nobody believes in us. We are constantly in fear.

So I feel fear when walking in an ally at night, but I don’t have any fear that someone will assassinate me for what I am saying. I would rather use my voice, than cower in fear.

There is still one thing that is even more difficult than being a woman. It is tough to be a female comedian. When a woman walks on-stage, you can feel the energy drop in the room. The assumption is that women are not funny. We have to work ten times harder (than men) to make audiences laugh.

In 2002, you become the first person to perform stand-up in Palestine and Jordan? What was the most impressive thing about this for you?

I will never forget my first show in Jordan. I didn’t know that stand-up comedy was new there, so people were surprised. I had to teach them what it was to laugh at the disabled. You are not laughing at me, you are laughing because I am funny. I taught them how to laugh freely and I trained comedians in Jordan, in Palestine, in Qatar and in Cairo − and now there is this amazing stand-up comedy thing in their world.

What are your current plans?

Cerebral palsy has affected my career severely, but that is changing now. I have just signed a deal with Universal Studios to make my own sitcom.

It is going to be the first time in American TV history that a visibly disabled woman leads a show. It has never been done before. We are not making history; we are changing the story.

When we normally see people with disability on TV, most of them are in sadness and need help. My TV show changes all of that. It is about mainstream disability. Instead of being helped, the actress with a disability is needed more by others than she needs them. It is called If I can can, and premieres in 2018.

With this article, the UNESCO Courier marks the International Day of Persons with Disabilities, 3 December.

Maysoon Zayid is an American actress, comedian, commentator and disability rights advocate. She was born in New Jersey in 1974 with cerebral palsy. She is known as one of America’s first Muslim women comedians and the first person to perform stand-up in Palestine and Jordan. She co-founded the New York Arab-American Comedy Festival and Maysoon’s Kids, a charity that provides programmes, resources and scholarships for disabled and orphaned children in Palestine.