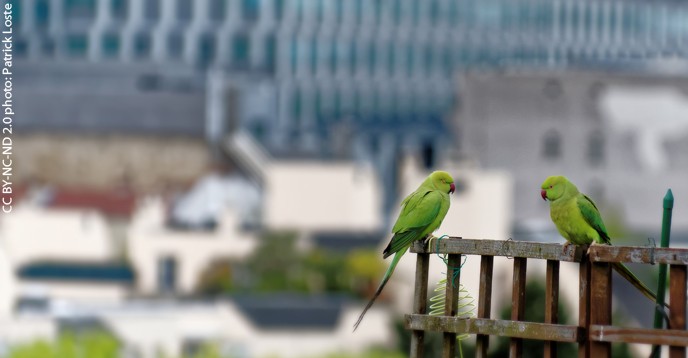 Some species are able to acclimatize more quickly than others to the urban milieu, like these parrots perched on a railing in Paris.

It is a paradox. Urbanization is one of the main causes of the destruction of biodiversity, and yet, cities today serve as a refuge for wild species whose natural ecosystems have been degraded. Even before animals started taking advantage of deserted cities and towns, and roamed through empty streets around the world amid lockdown, experts say they could become centres of biodiversity conservation in the future -- provided that preservation policies are put in place.

Journalist specializing in environmental issues, based in Paris.

Parakeets in the parks of Brussels, Amsterdam and London, wild plants thriving on asphalt, industrial buildings invaded by bats or birds of prey – recent studies show the astonishing ability of certain species to acclimatize to the noisy and densely populated environment of a city.

It is true that their survival is at stake. Cities, where two out of three people will be living by 2050, according to United Nations figures, are growing steadily at the expense of natural areas, forests and farm-land. The destruction of natural habitats, soil and water pollution, and the use of pesticides are all factors that disturb, or even destroy, ecosystems and the species they shelter. According to projections by researchers at the University of Pennsylvania in the United States, ninety per cent of natural areas that host endemic species could disappear in the coming years as a result of urban sprawl.

The fact that cities harbour wild species is not surprising when as many as 423 cities worldwide, with more than 300,000 inhabitants, have developed within environments rich in biodiversity – according to a study conducted by researchers at Yale University, US. Jakarta in Indonesia, for example, which is expected to gain three million inhabitants by 2030, is located in the heart of Sundaland, a region with some of the richest biodiversity on the planet.

The threat to biodiversity caused by urban growth is therefore very real. Yet nature does not always surrender in the face of advancing concrete. The reduced presence of pesticides, the absence of poaching, the diversity of habitats, milder winters, and the availability of water and food throughout the year favour the establishment of animals and plants in search of new spaces. But not all species are suited for city life. Only those with the genetic disposition to adapt, animal species with rapid reproductive cycles or a varied diet, have a chance.

The ingenuity of species

“There is a natural dynamic of plant and animal species to take over this new environment by adaptation, either by changing its habits or by evolving genetically,” says Pierre-Olivier Cheptou, an ecologist at the French National Centre for Scientific Research (CNRS). In an article published in the US journal, Proceedings of the National Academy of Sciences (PNAS), he shows that the Crepis sancta, a weed that grows around trees and along sidewalks in Mediterranean cities, has made major efforts to adapt to an environment that was not its own. Within a few generations, this weed belonging to the Asteraceae family has changed its breeding strategy – by giving priority to the production of heavy seeds that would allow it to reproduce at short distances, rather than light seeds that would not be able to germinate on concrete.

The animal world also displays ingenuity in conquering environments that should be hostile to it. Some birds are able to change their habits, and even their morphology, in order to adapt. Among coal tits, it is the most alert and aggressive individuals that colonize cities. These birds lay their eggs earlier and have smaller chicks because access to food is easier. Another difference is that the more active and stressed urban tits sing louder to be heard above the urban noise.

Ecologist Ana Catarina Miranda compared the behavioural differences between urban and rural blackbirds in a study which appeared in the journal Global Change Biology in September 2013. It concluded that the urban birds reacted more cautiously towards new objects, and were less inclined to approach even places familiar to them, compared to their forest counterparts.

Brambles and wild grasses on sidewalks

In order to develop, urban biodiversity will require special attention from decision makers.  “Urban planning will have to change completely,” explains Philippe Clergeau, an ecologist at the National Museum of Natural History in Paris. “It’s no longer a question of planting rows of a single species of tree, or artificial landscaping. We need to recreate genuine ecosystems similar to those of fields and forests.”

Bramble bushes, fruit trees and wild grasses will then have to take over the sidewalks. A real continuity of plant life between the countryside and the city will have to be created, with actual “corridors” of nature. The façades of buildings and roofs will also have to be covered with vegetation.

Ecologists see the emergence of two urban planning models – land sparing and land sharing. The first model involves creating a solid boundary between densely populated residential areas and vast natural spaces. The Sanjay Gandhi National Park – with 104 square kilometres of forest and lakes, teeming with biodiversity – is located in the suburb of Borivali, barely forty kilometres from the heart of Mumbai, India’s largest megapolis, and its 20 million inhabitants. The twenty or so leopards that live there tend to prey on the domestic dogs living at the park’s edge. Attacks on humans have also been known to occur, but protective measures, like limiting the number of large felines, now allow for cautious cohabitation.

Land sharing, on the other hand, involves diluting nature within the urban environment by introducing a succession of grassy passages, small gardens and neighbourhood green spaces.

Kevin Gaston, a researcher at the University of Exeter in the United Kingdom, set out to quantify the relative conservation benefits of these two urban models for biodiversity. It was in Tokyo that a sufficiently varied research environment was found, to compare dense and spread-out habitats for two insect populations – ground beetles and butterflies. “In highly urbanized areas, it’s the economy of space that makes it possible to better preserve these species,” says Gaston, whose study and its findings appeared in the Journal of Applied Ecology. “But in reality, it all depends on urban pressure. Where demand is high, the city must be dense and have a barrier separating it from nature. Where there is less pressure, sharing can be more favourable.”

Such research will have to inform the decisions urban planners make to design the cities of tomorrow. Some municipalities, such as Melbourne, Singapore and Cape Town, have already started. Urban biodiversity provides significant services to city residents. It makes it possible, in particular, to combat heat islands and flood risks, and to improve the quality of air, water and soil. There are also proven health benefits. In a 2016 study, the World Health Organization (WHO) showed that green spaces in cities contribute to psychological well-being, reduced stress and increased physical activity.

However, urban ecology still has many unanswered questions about the ability of species to adapt, particularly with the effects of global warming. It should not overshadow a major challenge in the years to come – that of preserving the biodiversity of natural environments.