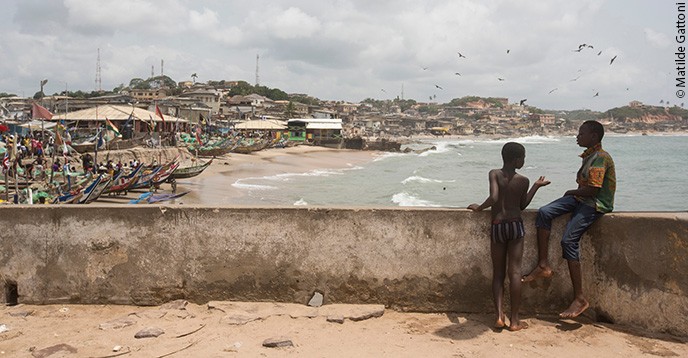 View of the harbour from the Cape Coast Castle, a fort on UNESCO’s World Heritage List, 200 kilometres west of Accra.

With a coastline of 550 kilometres and a quarter of its population living by the sea, Ghana is particularly affected by coastal erosion. Human activities that amplify the rise in water levels linked to global warming are largely responsible for this.

Kwasi Addo Appeaning
Associate Professor in Coastal Processes and Delta Studies and Director of the Institute of Environment and Sanitation Studies at the University of Ghana, Accra.

Located on the edge of the Gulf of Guinea, near the town of Keta in the Volta region on Ghana’s eastern coast, Fuvemeh was, until a few years ago, a prosperous fishing village living off the sea and its coconut plantations. Today it has been partly devoured by the sea.

By 2017, nearly eighty houses and a school building had been destroyed, and more than 300 inhabitants displaced. Farmlands and plantations were washed away, and the local fishermen lost their livelihoods. The situation has only worsened in the last three years, with the shoreline retreating several metres inland in some places, and by as much as 100 metres in others.

Using a drone equipped with a high-definition camera, my colleagues and I recorded aerial videos and images between August 2016 and June 2017. Comparing these with satellite images from 2014 and photographic maps from 2005, we observed that thirty-seven per cent of the coastal land had been lost to erosion and flooding between 2005 and 2017.

The construction of the 8,502-square-kilometre Akosombo dam on the Volta River in 1965, and the recent expansion of the Tema port have impacted sediment flow. This has contributed significantly to increased erosion along the eastern coast. Sand mining, an illegal practice that continues because of a lack of law enforcement, has also been identified as a major cause of erosion on the Ghana coast.

Villages that have become islands

The Volta region is far from being the only one affected by coastal erosion. The entire West African coastline is impacted, to varying degrees. Ghana, with its 550-kilometre coastline, is particularly vulnerable. Although the coastal zone constitutes about seven per cent of the country's total land area, it is densely populated – a quarter of its 31 million inhabitants live along the sea. In recent decades, heavy waves and floods have eaten into the shoreline, and turned some fishing villages into islands.

Ghana’s economic success over the last decade has come at a price, particularly for the country’s coastline. About eighty per cent of its industrial activities such as oil and gas production, port operations, and the generation of thermal and hydroelectric power, are concentrated along the coast, in addition to coastal agriculture and fishing.

Unregulated human activities have greatly accelerated the problem of coastal erosion − a natural ongoing process by which coastlines adapt to varying sea levels, the energy levels of the tides and currents, sediment supply, and the existing topography over hundreds of years.

Ghana’s western coast, which extends from Cape Three Points to New Town − adjacent to the border with Côte d’Ivoire – is the least affected by coastal erosion so far. This is because of the relatively low wave action and the presence of rocky beaches on this section of the coast. However, the high infrastructure development due to oil and gas production and an influx of people seeking employment in this area could cause changes in the coastal ecology systems.

The phenomenon is all the more worrying, as the impact of erosion along the Ghana coast is only likely to get worse with climate change and rising sea levels. Currently, the country’s coastline is eroding at an average rate of about two metres a year. But some smaller sites have recorded up to seventeen metres of erosion in a single year.

The 150-kilometre eastern coastline, which stretches from Aflao to Prampram, has been identified as the most vulnerable. This is due to the influence of the dynamics of the delta system of the Volta river, which is characterized by relatively strong waves and currents.

Increasing threats from coastal erosion was one of the factors that influenced the relocation of the office and residence of Ghana’s President from the Christiansborg Castle to the Flagstaff House in Accra in 2013. Other national landmarks, including the Independence Square and the Kwame Nkrumah Mausoleum in downtown Accra, and UNESCO World Heritage sites Forts and Castles in the Volta, Greater Accra, Central and Western Regions − the remains of fortified trading posts erected between 1482 and 1786 − are in danger of being claimed by the encroaching sea in the next century.

Cultural heritage sites such as Fort Kongensten – a historic Danish Fort constructed at Ada in 1783 – have been completely washed away, while parts of Fort Prinsensten, built at Keta in 1734, have been destroyed by coastal erosion.

In addition, nesting sites of endangered marine turtles in Ada and Totope and habitats of migratory birds are being destroyed. Natural landing sites used by traditional fishermen are also eroding, threatening traditional livelihoods. The collapse of the once-thriving small-scale coconut industry shows the effect of erosion on coastal vegetation.

Faced with the scale of the threat, the authorities have reacted. Ghana’s National Environmental Policy now mentions marine and coastal degradation as one of the country's environmental challenges. The government has constructed heavy engineering structures such as sea-walls at key points along its shore to stabilize the coastline. Six groynes – low broad walls of concrete or masonry running out into the sea – have also been built as part of the Keta Sea Defence Project.

However, these structures could eventually aggravate erosion in other parts of the coast. It is necessary to go beyond these reactive measures. In order to combat erosion effectively, more emphasis needs to be placed on prevention. An effective mechanism for risk monitoring is crucial for developing strategies and protecting coastal communities. Drones, which are low-cost and easy to operate, could be deployed as early warning systems. This would help vulnerable populations to be better prepared for storms and floods, which have increased in frequency in recent years.

At the same time, a more comprehensive coastal erosion management strategy needs to be put in place. Providing coastal protection should not be seen only as the first line of defence, but should be accompanied by measures to promote the adaptation of human activities and the restoration of coastal ecosystems. It would be more effective to encourage the resilience of the regions affected by erosion than to fight against nature.

Senegal: Coastal zones at the mercy of the waves, The UNESCO Courier, November 2005