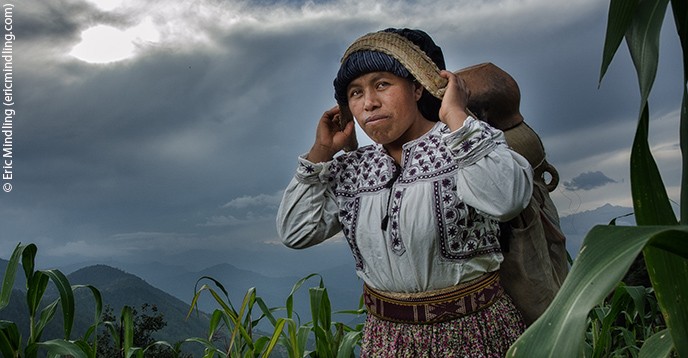 María Jiménez, a potter in Tlahuitoltepec, carries her wares to market, wearing a blouse adorned with sacred xaamnïxuy motifs. She is photographed in the corn field she cultivates with her husband and children.

Ethnic motifs are very much in style. Revived by designers and major brands, they adorn fashion items sold all over the world – often without the permission of the communities from which they originate. The author, a Mexican anthropologist who specializes in traditional textiles, advocates taking better account of the rights and interests of indigenous communities.

Marta Turok
Curator of the Ruth D. Lechuga collection of folk art at the Franz Mayer Museum in Mexico City, she is the author of numerous books and articles on arts and crafts.

The story goes back to 2015. Susana Harp, a famous singer who is also a senator in the Mexican Congress, was surprised to find an embroidered long-sleeved blouse – very similar to those made by the Mixe indigenous community of Santa María Tlahuitoltepec, in her home state of Oaxaca – in a boutique in a Las Vegas shopping mall.

The garment, which carried the label of a French designer, had been made in India using the same pattern, embroidery technique, colours and design as the original. The only difference was that the blouse was being sold in the United States for $290, compared to about $35 in Tlahuitoltepec.

Outraged, Harp shared an image of the two designs of the blouse on social media, along with its label that made no mention of its origin. She also filed a lawsuit, claiming plagiarism and cultural appropriation.

In the months that followed, community leaders made several public declarations in Oaxaca and Mexico City, accompanied by representatives of the embroiderers. They pointed out that the designer had not contacted them – denying them the opportunity to explain the significance of the blouse’s motifs. Their 600-year old traditional garment design was not for sale, they declared. The real issue, they insisted, had nothing to do with granting permission, or the payment of reproduction rights or royalties.

In a further surprising twist to the story, another French fashion company was also suing the same designer in the French courts for plagiarism, claiming its earlier use of the identical Mixe motifs. In order to win her case, the designer claimed that she had visited the community and had directly purchased the blouse from them.

Producing evidence to show that this trip had taken place prior to the time specified by the plaintiff, the designer concluded that she had “borrowed” the design of the blouse and its embroidery from the Santa María Tlahuitoltepec community – thereby acknowledging she was not the design’s owner. Meanwhile, at the request of the Mexican Senate, the Mexican Institute of Industrial Property (IMPI) declared there had been no plagiarism because the “work” had not been registered.

Finally, it should be noted that the text on the garment’s label indicated that the blouse had been “made of unbleached cotton muslin and delicately embroidered intricately with black and burgundy thread to form a beautiful floral design”.

However, the motifs reproduced on the original Tlahuitoltepec blouse – called xaamnïxuy in the Mixe language – represent a sacred landscape: the sun, the agave cacti, the earth, the path, the mountain, the offering, the water and the flower. In this community, wearing the xaamnïxuy every day is a matter of identity and protection.

What the community wanted, in this case, was simply to have its wishes respected, and that its  heritage be recognized. It refused to allow the blouse to be taken out of its cultural context and be transformed into a mere commodity on the world’s fast fashion market. As long as the production and economic benefits remained under its control and respected its criteria, it saw no obstacle to artisans producing and selling the blouse and other garments within and outside the community.

What the community wanted was simply to have its wishes respected

Interestingly, sales of xaamnïxuy increased, following the media campaign. At the first Latin American meeting for the defence of cultural heritage, ancestral knowledge, collective intellectual property and indigenous peoples’ territories in San Cristóbal de Las Casas, in Chiapas in September 2018, weavers and embroiderers similarly concluded that “Our know-how is not to be privatized or patented; our designs and our cultural heritage are part of the life of our territories”.

The case of the embroidered blouse of the Santa Maria Tlahuitoltepec community is emblematic of the debates on intellectual property. Today, indigenous peoples and communities and their artisans are increasingly challenging what they consider to be the misuse of their cultural elements by outsiders – without prior consultation or authorization. As a logical consequence, lawsuits for cultural appropriation, plagiarism or theft, are proliferating.

Globalization, new technologies and geographical mobility are accelerating the dissemination of information, giving cultural diversity a worldwide visibility that it has not had before. The repercussions are twofold and paradoxical. In the absence of mechanisms for the protection of collective cultural rights, actors from outside the producing community have easy access to the motifs and forms they use – often displaying an attitude that could be described as neo-colonialist. On the other hand, these same factors enable peoples and their allies to be better informed and to denounce abuses more quickly.

For example, between 2012 and 2019, the non-governmental organization Impacto – which campaigns for the rights of indigenous peoples – documented at least thirty-nine cases of plagiarism in the field of textiles by twenty-three fashion brands around the world. Such practices are regularly exposed in the media.

Yet, the abuses continue, and sanctions are extremely rare. The affected communities can only watch helplessly as local companies, the industry, and major international brands exploit the “ethnic” fashion trend, because there is no apparent ownership or legal protection. Examples of this appropriation continue to grow, without anyone seeming to care – leading to increasing feelings of injustice, indignation and dispossession among those exploited.

Part of the problem lies in the fact that the intellectual and industrial property laws of the World Intellectual Property Organization (WIPO) and the claims of aggrieved indigenous peoples are based on diametrically opposed philosophies and world views – in which the concepts of property and heritage are viewed and experienced in different ways.

In this context, the recent reform of the Mexican Federal Copyright Law is a step in the right direction. Approved in January 2020, the new provisions provide for the removal of works of folk art and handicrafts from the public domain, and guarantee them the same protection and respect as any literary or artistic work.

In addition, in order to exploit, market or industrialize works of traditional art, it will now be necessary to request authorization from the communities that own them. A safeguarding law that would sanction the unauthorized use (plagiarism) of elements of the culture and identity of peoples and communities, is also currently under discussion. This legal text will create a system for the protection, defence, identification, documentation, research, promotion, valorization, transmission, and revitalization of these elements at the federal, state and municipal levels.

This is a first step, but an important one on the long road towards taking better account of the rights and interests of indigenous communities.

The Convention on the Protection and Promotion of the Diversity of Cultural Expressions, 2005

A prince embroiderer without a kingdom, The UNESCO Courier, July-August 2001

Intangible heritage, The UNESCO Courier, May 2006