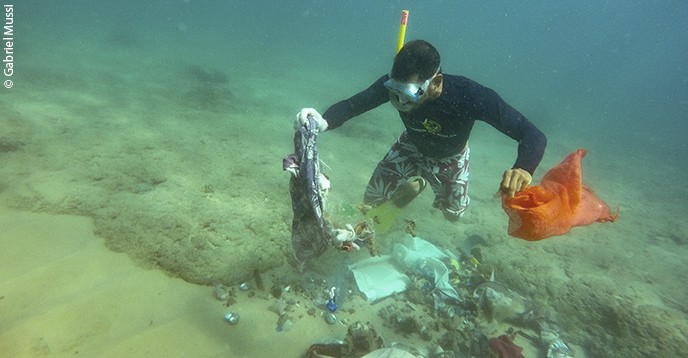 Volunteers participating in the Fundo da Folia project dive to collect the garbage thrown into the sea during Brazil’s Carnival.

Across the continent, a growing number of projects are encouraging a better understanding of marine environments, and helping to develop a form of “citizenship of the ocean”.

Rodrigo Torres and Samila Ferreira
A maritime, coastal and underwater archaeologist, Torres is a professor at the Center for Coastal Heritage Research (CIPAC), of the University of the Republic, Uruguay.
Ferreira is a cultural anthropologist and researcher at CIPAC.

The project started in 2010 in Salvador de Bahia, on Brazil’s north-eastern coast, the day after the Mardi Gras carnival. Observing the mountains of garbage thrown into the sea after the popular annual festival – during which millions of people take to the streets to dance and participate in the parade – four surfers decided to take action. They created O Fundo da Folia (the Festival Fund) to clean up the waste that had been dumped into the sea.

In Brazil, the Fundo da Folia has collected hundreds of tons of waste from the sea floor

A decade later, the association still exists, and has even grown through the years. Scientists and local residents now participate in the operation, not hesitating to dive to the bottom of the sea to clean up the rubbish. They have no oxygen cylinders and are helped only by volunteers perched on paddle boards.

More than 200 activities have already been launched as part of this initiative, which combines sport with environmental awareness, and has cleaned out hundreds of tons of waste from the sea floor. In 2019, the area covered by the project was declared a protected zone at the municipal level. As a result, the Barra Marine Park, Brazil's first marine reserve in an urban context, was established.

This local initiative is just one example of the growing awareness in Latin America of the need to combat marine pollution – that includes beach clean-up projects, awareness-raising workshops in schools, “zero waste” campaigns on social networks, etc.

The images circulated by the media and on social networks – of beaches that have turned into garbage dumps and of turtles drowning after ingesting plastic bags – have had a great impact on the general public. The seas around us are overflowing with garbage: an estimated eight million tons of plastic are dumped into the ocean every year. According to the World Wildlife Fund (WWF), Latin America is the fourth-largest producer of plastic waste in the world.

However, a significant part of this waste washes up on beaches, drifts on the surface of the ocean, or invades the seabed by decomposing into micro-particles. Today we know that about a thousand kilometres from the Chilean coast, there is an alarming concentration of plastics in the ocean – up to 50,000 pieces of debris per square kilometre in some areas.

Plastic straws, for example, which can take a hundred years to decompose, are typical of the single-use objects that have invaded our daily lives. Several Latin American countries – including Argentina, Brazil, Chile and Mexico – have joined global initiatives to ban the use of plastic straws, and have launched campaigns on social networks to raise awareness of their toxicity.

These campaigns may seem trivial, considering the scale of the problem. Yet, though straws represent only a tiny part of the total volume of marine waste, these campaigns contribute to a much wider public awareness of the negative effects of the disposal of seemingly harmless plastic utensils, which are ubiquitous. They also encourage us to think about our consumer habits and the impact of our daily actions on the environment.

In addition to these initiatives, raising public awareness also involves the dissemination of educational and teaching resources. This enables young people not only to better understand the complex physical, chemical and climatic phenomena that govern the ocean, but also to help change our perception of, and our relationship with it.

In an increasingly hyperconnected world, digital technologies offer interesting possibilities in this respect. In Uruguay, for example, a project called Route of the Vessels: Developing a Virtual Museum of the Maritime Landscape of Maldonado Bay provides information on issues related to the preservation of maritime and underwater Uruguayan cultural heritage. It proposes educational and recreational experiences, using innovative technologies to familiarize people with scientific research.

The programme includes the three-dimensional modelling of iconic sites linked to the region’s maritime history, using virtual and augmented reality to create exhibitions on seafaring people, their boats, historical routes and maritime landscapes.

The goal is to take advantage of the possibilities provided by digital culture to encourage the public to take ownership of their cultural heritage – and to explore the changes in perspective that have shaped people’s relationship to the sea, the construction of identities, and the sense of belonging.

Beyond their differences in approach, these initiatives have a common thread: they make us think not about what the ocean can do for us, but about what we can do for the ocean.

Ocean literacy for all

Welcome to the Anthropocene!, The UNESCO Courier, April-June 2018

A Crystal Palace houses a shipwreck, The UNESCO Courier, October-December 2017