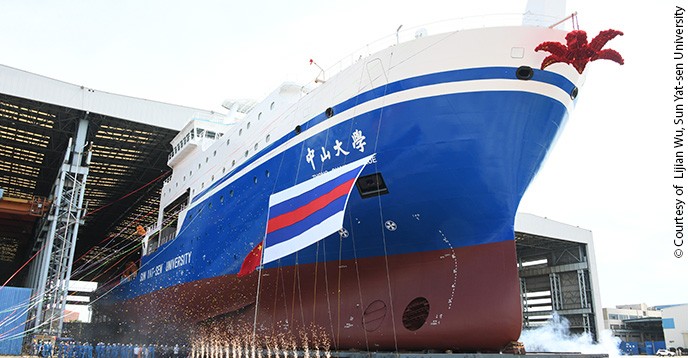 China’s RV Zhong Shan Da Xue, is a gigantic state-of-the-art floating laboratory that will help scientists discover the deep seas. One of its first missions is to study a whale fall that was recently discovered.

Yu Weidong
Professor at the School of Atmospheric Sciences, Sun Yat-sen University in Guangzhou, China, with an expertise in ocean-atmosphere interaction, the monsoon, and climate variability.

On 18 March 2020, marine scientists on an expedition aboard the research vessel RV Tansuo-1 made an extraordinary discovery. The team, which included co-chief scientist Wei Xie, associate professor at the School of Marine Sciences at Sun Yat-sen University (SYSU), witnessed a whale fall in the South China Sea (SCS), 1,600 metres below the sea surface.

A whale fall occurs when whales die, and their carcasses sink to the ocean floor, creating complex localized deep-sea ecosystems. This sudden concentrated food source acts as an oasis for life in the deep sea, providing sustenance to deep-sea organisms for years, or even decades.

There are less than fifty modern natural whale falls in the world, and this is the first of its kind in this zone, according to Wei. The whale carcass of approximately 3.4 metres in length still had fish tearing at its tail, indicating that it died only recently, and so has “long-term observation value”, the scientist explained.

This discovery is of great significance because it will help promote the research of how marine ecosystems support life in the pitch-dark depths of the ocean, which remains largely unexplored around the globe. Understanding the changing process of the whale fall and neighbouring ecosystems could aid conservation efforts and the harnessing of deep-sea biodiversity resources. Exploring the ocean floor can also teach us about how best to handle climate change.

The challenge of the long-term monitoring of the whale fall will be one of the missions of the RV Zhong Shan Da Xue. Launched by SYSU on 28 August 2020, and named after its developer, the research vessel is part of the infrastructure investment of the university’s ambitious programme to promote its ocean science cluster since 2015.

The largest oceanographic research vessel in China, and second only to the Japan Agency for Marine-Earth Science and Technology’s (JAMSTEC) RV Mirai, the vessel is 114.3 metres long and 19.4 metres wide, with a total tonnage of 6,800 tons. With a long-distance cruising capacity of 15,000 miles, the vessel can host a hundred people – a crew of twenty-four and seventy-six scientific team members – it is equipped to embark on sixty-day expeditions.

Featuring a stationary laboratory and a large deck space, the vessel’s quarterdeck can carry an additional ten mobile container laboratories. The advanced research equipment allows scientists to process, test and analyse samples aboard the RV. It also facilitates the full-depth profiling of water parameters, and bottom geological and geophysical sampling of the sea bed.

The vessel is equipped with remotely operated vehicles (ROVs), unoccupied and highly manoeuvrable machines that are remotely operated from the ship. ROVs can stay underwater much longer than divers or any type of submersible occupied by humans, which facilitates detailed experiments and collecting samples from the ocean floor.

The research ship is the first in China to feature an advanced weather radar, a powerful tool to study the strong convection and intensive rainfall over the ocean, which is critical to understanding and predicting extreme weather over land. The RV also boasts a landing deck for helicopters and drones, which enhances its logistics support.

Once in operation in 2021, the vessel’s research will complement satellite observation, which is strong in wide spatial coverage, but weak in vertical penetration, when it comes to plumbing ocean depths.

The SCS hosts its own regional monsoon system, which is one of the most complex and least understood climate systems in the world. It also plays a role in the water exchange between the Pacific, through the Luzon Strait, and the Indian Ocean through the Indonesian Through-Flow (ITF), an ocean current which influences the global climate. All these environments contribute to the SCS becoming a hot spot, featuring some of the richest biological and ecological diversity in the world.

So far, ocean-related research around the SCS has been mostly confined to the coasts, due to the lack of resources for scientific ships. This has prevented the SCS Rim countries from developing their capacities to sustainably manage the ocean. The newly-commissioned RV will provide new opportunities for multidisciplinary research and the deep-sea exploration of the largely unknown SCS.

A crucial function of the RV is its research and training, with a significant part of its ship time allocated to on-board and in-cruise training. This forms an integral part of SYSU’s university programmes at various levels.

In the past five years, the university’s undergraduate and postgraduate students have participated in six in-cruise training courses. This included a one-month cruise aboard RV Shen Kuo, a vessel contracted by SYSU in 2019. Students studied the air-sea interaction during the monsoon over the northern SCS continental shelf. This was done by conducting atmospheric boundary layer observation using GPS sounding and drones.

The training programmes are expected to receive a boost when the new classroom at sea becomes operational. They will also be open to students from the SCS Rim countries.

Over the next decade, the university plans to offer cruises on the new RV which will focus on the SCS Monsoon Experiment, Deep Ocean Life and Ecosystem Study. The challenge of a lack of data on the SCS is expected to be resolved in the coming years.

This mobile laboratory will help the surrounding countries to supplement and extend their nearshore and coastal studies to more offshore deep-ocean areas, for a more complete understanding of the ocean. Regional efforts to address climate change, such as ocean heatwaves, acidification, deoxygenation, extreme weather and climate disasters will be supported by this vessel.

Much of its ship time will be dedicated to regional co-operation, particularly under the umbrella of the United Nations Decade of Ocean Science for Sustainable Development (2021-2030). Its goal is to inspire young people, who could be oceanographers in the future.

From fish scales... to sunken treasures, The UNESCO Courier, July-August 1998

Satellites scan the ocean: modern technology in the service of oceanography, The UNESCO Courier, February 1986