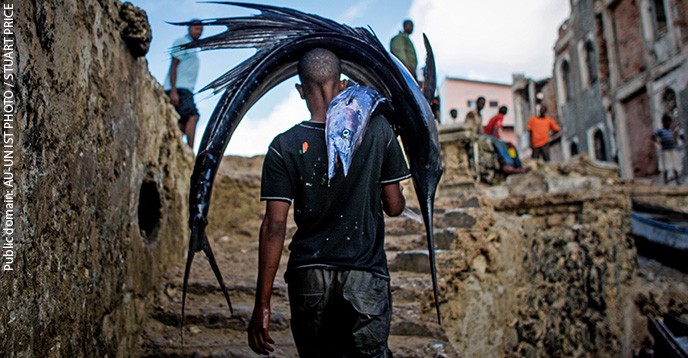 A fisherman transports his catch of sailfish on his head and shoulders to a fish market in Mogadishu, the capital of Somalia.

Viewed as a strategic sector by a growing number of African countries, the blue economy, which involves the sustainable use of ocean resources, could become an important lever for development in the years to come. But this will only work if efforts to combat the impacts of climate change and overfishing are intensified.

Adam Abdou Hassan
Professor and researcher in public law at the University of Rouen Normandie, France, and Executive Director of the Niger Institute of Strategic and International Studies.

The African Union has hailed the blue economy as a “new frontier of the African renaissance”. In its Agenda 2063, which sets the strategic directions for future decades, the pan-African organization identifies the blue/ocean economy as one of its goals and priority areas. The publication of a policy handbook in March 2016 on the continent’s blue economy by the United Nations Economic Commission for Africa is another indicator of the interest in this sector.

Although it is still a relatively new concept, the blue economy could be a powerful tool for the development of the African continent. Some countries, such as the Seychelles, have already taken steps towards it, by integrating the harnessing of the ocean into their development plans. In 2014, South Africa launched Operation Phakisa (“hurry up” in Sesotho), to sustainably exploit the economic potential of the ocean through maritime transport and manufacturing, offshore oil and gas exploration, and aquaculture. In West Africa, countries including Togo and Senegal have adopted strategies to build a sustainable blue economy.

The prospects are promising for a continent which includes thirty-eight coastal and island countries, with territorial waters covering 13 million square kilometres, out of a total of fifty-four states. In addition, over ninety per cent of African imports and exports are carried out by sea.

A vital source of protein

Marine resources could help address the nutritional and food security issues of nearly 200 million Africans, through the vital contribution of marine and freshwater fish. In food-deficient and low-income countries, fish provides almost twenty per cent of animal proteins consumed by their populations. This number rises to fifty per cent in densely- populated island and coastal countries such as Ghana, Guinea, and Senegal. The stakes are therefore high, especially because Africa’s population is set to double by 2050 – from 1.2 billion to 2.5 billion inhabitants.

The aquaculture and fisheries sector – which employs about 12.3 million people in Africa – is still largely under-exploited.The industry needs to be professionalized further to create more jobs. The development of related jobs – such as the processing, treatment and transformation of fish by setting up specific modules, and the local or sub-regional manufacture and weaving of nets, etc. – also needs to be encouraged. The development of these jobs could enable the social integration of vulnerable populations, such as youth and women. In West Africa, these groups are already responsible for selling nearly eighty per cent of all seafood products. However, the tasks they perform are under-paid and their contributions to the economy, to employment, and to food security are underestimated.

The blue economy could provide the opportunity for African states to take a leap forward in the industrialization process. This could be done by skipping some steps, while integrating climate change and sustainability measures. Biotechnology, in particular, makes it possible to manufacture products in the biological, pharmaceutical and food sectors, and offers an alternative to the use of traditional fossil fuels. Morocco, for example, has seized the economic opportunity to exploit marine algae. Its BIOXPARC network of technology parks is a biotechnology hub in Marrakesh. The trans-border laboratory BIOVecQ in Tunisia is yet another example of the sustainable processing of aquatic products.

Innovation and research, especially in new sectors related to the added value of services from the sea, can stimulate sustainable blue growth. These initiatives are already multiplying across the continent. The Songhaï Centre in Porto-Novo, Benin, has developed a blue economy model that combines energy and plant production with aquaculture. It produces methane from wastewater to provide energy for domestic use. Following a mineralization process, the compost remains can be used to feed phytoplankton, zooplankton, and benthos – which in turn are used to feed fish in a fish farm.

Another example that showcases innovation is the Institute of Fisheries and Aquatic Science, Yabassi, at the University of Douala in Cameroon. It has set up a pilot unit for the production and processing of spirulina, used for the manufacture of soaps, yoghurts, and drinks. In Kenya, AquaEdge Africa is working to transform fish into high-protein biscuits.

However, to fully exploit the potential of the blue economy, countries need to address the adverse impacts of climate change and environmental mismanagement. Africa is vulnerable to the negative effects of human-induced climate change. This is not the only challenge, though. The over-exploitation of some fishing grounds is of major concern.

One of the world’s richest fishing regions, West Africa is also one of the most affected by overfishing. According to a 2016 review on the Fish Trade by the United Nations Conference on Trade and Development (UNCTAD), half of the fish stocks off West Africa’s coast are considered overfished. This is partly due to illegal fishing.

The Overseas Development Institute (ODI), an independent global think-tank, estimates that over fifty per cent of the fish resources of the coastal zone from Senegal to Nigeria have already been over-exploited. It is estimated that illegal fishing accounts for between a third and a half of the total regional catches.

Overcoming these obstacles will require a concerted effort by countries in the region. Adopted in 2016, the African Union’s Lomé Charter is a response to the “illegal exploitation and plundering of marine resources.” It prohibits trade in products derived from such exploitation, which also jeopardizes the food security of the continent. It is therefore essential that African States develop responses to these challenges, so that their populations can fully benefit from this bounty from the ocean.