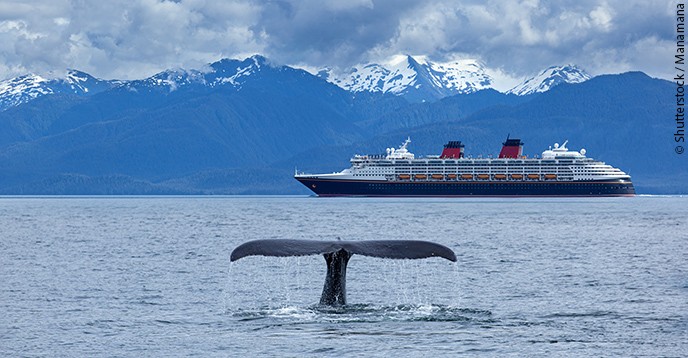 A whale displays its tail not far from a cruise ship, in Alaska, United States.

For a long time, we believed the ocean was a silent world. On the contrary, sounds play a crucial role for many marine organisms. But the noise generated by human activities is jeopardizing the survival of certain species. Michel André, acoustician and director of the Laboratory of Applied Bioacoustics (LAB) at the Technical University of Catalonia in Barcelona, warns of the dangers of this noise pollution.

Does the ocean produce noise?

In the ocean, sound is synonymous with life. Since light does not penetrate more than a few metres below the surface, it is the only medium of information the inhabitants of the sea have at their disposal to communicate.

But it is only in the last twenty years or so that we’ve fully realized the importance of these sounds. In fact, since the human ear is not designed to hear underwater, the sounds under the sea have long been ignored – as shown in The Silent World, the 1956 documentary directed by Jacques-Yves Cousteau and Louis Malle.

Today, thanks to the development of new devices, such as hydrophones, that are capable of capturing underwater sounds, we can now confirm that the sea is a world of 20,000 sounds. These are essential to marine life.

This discovery has also opened our eyes to the intensity of noise produced by human activities. For over eighty years, since the beginning of the industrial exploitation of marine resources by humans, we have unknowingly been polluting the ocean acoustically.

For over eighty years, we have unknowingly been polluting the ocean acoustically

What are the consequences of this discovery?

As soon as it became clear that noise from anthropogenic sources could threaten the equilibrium of the ocean, the scientific community first turned its attention to the eighty-nine species that make up the order of cetaceans. Today, we have managed to determine the acoustic sensitivity of nearly twenty-five per cent of these species that use acoustic exchange on a daily basis, either for hunting or reproduction. The evolution of their brains is based on this perception – for more than 30 million years, in the case of some species.

Ten years ago, we discovered that marine invertebrates (cephalopods, crustaceans, shellfish, jellyfish, corals, etc.) have sensory organs to manage gravity in the sea – even though they have no auditory system. These species are sensitive to the perception of sound vibrations. Exposed to anthropogenic noise, they suffer acoustic trauma that threatens their survival. This is one of the most serious threats to the ocean’s equilibrium.

Anthropogenic noise threatens the equilibrium of the ocean

What is the impact of this noise on marine fauna?

The primary effect is to interfere with communication signals. The sound information necessary for survival does not reach the species because of this noise pollution. For instance, noise can disorient cetaceans and prevent them from hearing a boat approaching.

Noise can also be lethal. The sound source produced is sometimes so intense for an animal receptor that it causes immediate trauma that can be fatal for certain organisms. This is the case for sound sources associated with oil exploration or military underwater manoeuvres.

Finally, there is acoustic trauma. Long-term exposure to a sound source can cause fatigue of one of the species’ receptor organs, leading to irreversible damage – such as the inability to pick up sounds.

Did the drop in traffic caused by the global lockdown in spring 2020 lead to a decrease in noise pollution in the ocean?

Our global underwater observatory network, Listening to the Deep Ocean Environment (LIDO), enabled us to carry out a comparative study of different noise levels in 2020. The lockdown did indeed lead to a reduction in the traffic of activities at sea, and thus there was a decrease in the intensity of the noise level. But this decrease was not significant. It was comparable to other periods of the year when traffic is usually less dense.

How can we fight this noise pollution?

For more than ten years, the technology has been available to operators to help their efforts to reduce acoustic impact. In modern transport ships, for example, the engine room is now insulated to prevent noise and vibrations from passing through the hull and into the water.

Finally, it is now possible to act on the sound sources linked to oil exploration or military operations. Today’s technologies make it possible to detect the presence of species that could suffer from the impact of noise and to wait until they move away from the areas of operation, in order to limit the risk.

This interview marks The UNESCO Courier's collaboration with ChangeNOW. Its 2021 summit, to be held in Paris from 27 to 29 May, brings together decision-makers, entrepreneurs and innovators, to propose concrete solutions for a sustainable world.

From aqualung to bathyscaph by Jacques-Yves Cousteau, The UNESCO Courier, July-August 1960