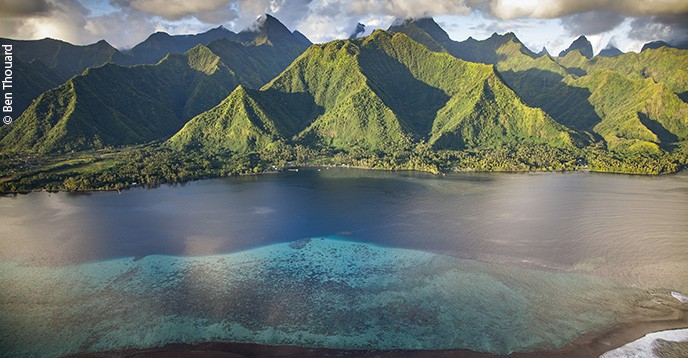 The start of the rahui zone in Teahupoo.

On Tahiti’s southern tip, the traditional practice of rahui – which temporarily prohibits fishing and the harvesting of resources from the sea – was recently reintroduced. This has allowed marine life in the surrounding ocean to regenerate and thrive again.

Esther Cunéo
Journalist based in Papeete

Far from the bustle of Papeete, the jungle of Tahiti Iti, or the Taiarapu Peninsula, appears even more luxuriant in the rain. Located on the island’s south, this “Land beloved of the gods” – or Fenua here hia te atua, as the elders still refer to it in Tahitian – is undisturbed by roads.

Better known as Fenua Aihere (land in the bush), it is the last remaining wilderness on the main island of French Polynesia. Two villages share these verdant lands – Teahupoo on the south-western coast and Tautira on the south-east.

The virgin forests that cover the area still conceal several marae, the sacred ceremonial and social spaces where ancient Polynesian rites were once performed. This is why the 600 inhabitants of Fenua Aihere say their land is infused with mana, the supernatural power that emanates from nature.

“The mana exists because this area has been preserved, it’s really a magical place. Out of respect for those in the beyond, we should not build a road here,” insists Annick Paofai, president of the association to protect Fenua Aihere. In fact, the few city dwellers who have tried to defend the construction of a path to their second homes have been turned down by the court. “If you want to live in Fenua Aihere, the only way to get there is on foot, by pirogue [a canoe] or by boat,” Paofai insists.

But here, as elsewhere, the health of the lagoon began to decline in the 1990s. The loss of biodiversity was reflected in a reduction in fish stocks; the proliferation of invasive species like the Acanthaster planci, a coral-eating starfish; and the depletion of certain key species like the surgeonfish.

Attracted by a resource that was reputed for its abundance, fishermen from outside the area started fishing here, leading to clashes with the Teahupoo locals. These conflicts have led to calls for better regulation of the use of the lagoon, since the end of the 1990s. “Local fishermen were afraid [to lose their livelihoods], and asked me to set up an association to revive rahui,” Paofai explains.

Mixing politics and the spirit world

A traditional practice that has not been used for decades, rahui consists of temporarily restricting or banning access to the harvesting of essential resources in the forest, land or sea to allow the area to naturally regenerate itself. Imposed by a clan or chieftaincy, this prohibition was originally both a political and a sacred matter. The tapu, or temporary taboo, was invoked through a sacred chant by an ari'i (king) or a tahu'a, a medium acting as a link between the spirit world and the living. “In the eighteenth century, when the warrior Vehiatua introduced rahui to Teahupoo, anyone who did not respect it was condemned to death,” says Gérard Parker, a former mayor of Teahupoo.

“This intervention by the spirit world lasts as long as it takes for nature, the animal, the tree, or the fish, to regenerate itself,” explains Yves Doudoute, founding member of the Haururu association, and a strong advocate for the region’s cultural heritage. The key to its effectiveness is mana, which is at the heart of their culture. “Before they came into contact with the West, Polynesians did not live in nature, but in relation to entities charged with sacredness,” writes Bernard Rigo, cultural anthropologist and former head of the Human Sciences Research Laboratory of French Polynesia.

While fishermen were opposed to the setting up of a marine protected area by the authorities, they were more open to the introduction of rahui. “The sacred nature of rahui sets it apart from an administrative ban, making its dissuasive powers more effective,” Doudoute states. “A purely human and random form of authority has limited power of persuasion,” confirms Rigo. In contrast, with rahui, it is believed that the punishment is “inevitable, because its transgression breaks the sacred circuit, and all the energy is diverted against the transgressor.”

In French Polynesia, the inhabitants of Rapa in the Austral Islands, and Maiao in the Society Islands, were the first to reinstate rahui in the early 2000s on parts of their islands.

It was not until 2014 that a rahui was created in the lagoon of Taiarapu-Est. Covering a marine surface area of 750 hectares, the lagoon is managed by a committee made up of elected officials, fishermen’s representatives, delegates from local associations, scientists, and officials from the environment department. “This custom has not existed here for a long time. That is why it has taken a while to return to this practice,” explains Paofai.

Thanks to the efforts of the inhabitants, the rahui has been legally protected under French Polynesia’s environmental code since 2016. Article LP 2122-1 stipulates that: “The rahui is a land and/or marine area over which unwritten rules dictated by a resource management imperative are applied in a traditional manner.”

Today, the rahui covers five per cent of the lagoon. Six years later, the result is clear: the fish have returned. But for now, there is no question of lifting the ban. Fearing a new decline in marine species, the management committee is even thinking of making it permanent.

“The fish have come back, but if we lift the rahui, it won’t be long before the stocks are depleted again,” warns Paofai. The threat of outsiders coveting the lagoon’s abundance has not waned. Although only one guard has been assigned to watch over the site, the local residents remain vigilant. “At night we sometimes see mori pata (flashlights). In that case, we intervene,” the president of the association says.

The battle to save the coast

Some inhabitants of Fenua Aihere would like to extend the marine protection that applies to the maritime zone to the coast – to establish continuity between the land and the sea. “You cannot protect the marine areas without including the coastline, but convincing the local residents will not be easy,” admits Paofai. The area that hosts the Te Pari hiking trail, with its spectacular views of basalt cliffs plunging into the ocean, is very popular with tourists – it would be hard to keep visitors away. And while this little corner of paradise is still largely protected from human activity, the lagoon waters surrounding Papeete, the capital, are regularly clogged during the rainy season because of the furrows dug to accommodate the increased urbanization of the mountainside.

Anchored in tradition, rahui has, over the years, become established as a sustainable means of managing marine resources. According to a 2019 study by Alvea Consulting, a management consulting firm based in Papeete, rahui is supported by ninety per cent of the inhabitants of French Polynesia today. “That’s reassuring. It proves that it is still possible to live like our ancestors, thanks to this system,” Doudoute says. He is calling for a rahui zone in the Papenoo valley, in the north of Tahiti, which is known for its spectacular waterfalls. “We must return to the sacred, to the common good. We have no choice. When you live on a pirogue, you must become one with the world.”

Today, rahui is supported by ninety per cent of the inhabitants of French Polynesia

When you drink water, think of the source, The UNESCO Courier, January-March 2019, an issue on indigenous languages and knowledge