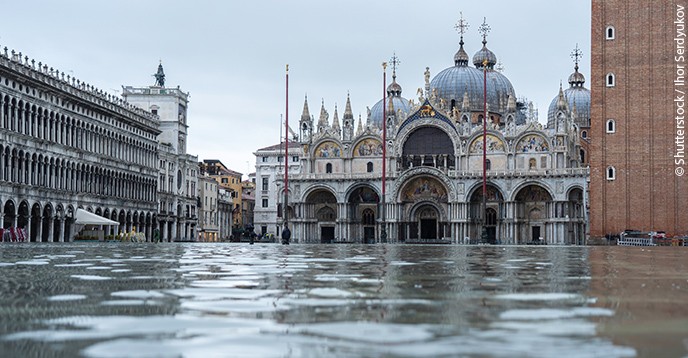 Saint Mark's Square in Venice, Italy, November 2019, flooded by the second-highest acqua alta, or high water, since records began in 1923.

The number of people at risk from rising sea levels could be three times higher than previously estimated, according to research by Climate Central, an independent climate science and news organization based in Princeton, New Jersey.
Scott Kulp, Senior Computational Scientist and Senior Developer for Climate Central’s Program on Sea Level Rise, and lead author of the 2019 study, used artificial intelligence to analyse this phenomenon – which could push millions of people into exile as early as in 2050.

According to your study, Flooded Future: Global Vulnerability to Sea Level Rise Worse Than Previously Understood, coastlines across the world are more exposed than was previously thought. Were you surprised by the results?

We expected our study to reveal more risk worldwide, but not to the extent we saw. Our findings show that within thirty years, coastal flooding can be expected at least annually on land that is currently home to 300 million people. And 150 million people live on land expected to fall below the high tide line by 2050, meaning that without coastal defences, those places could be practically uninhabitable.

Under a higher-emissions scenario, and near the tail-end of sea-level rise sensitivity to warming for the model used in this study, land that is home to about ten per cent of the world’s population could be threatened by the end of the century, either by chronic flooding or permanent inundation.

By how much are global sea levels expected to rise in the twenty-first century?

By the end of this century, most projections show sea levels increasing by half-a-metre to one metre, with an accelerating rate of rise, and that would accompany more frequent and more severe coastal floods.

Our study found that cutting global carbon emissions roughly as proposed in the Paris Agreement could, by the end of this century, prevent the risk of annual coastal floods and permanent inundation from expanding to land now home to thirty million people. But beyond that, this would reduce the danger of many other risks of climate change.

Which regions will be most affected?

Sea level rise is a global story, and it affects every coastal nation. But in the coming decades, the greatest effects will be felt in Asia, because of the number of people living in the continent’s coastal areas. Bangladesh, China, India, Indonesia, Thailand and Viet Nam are home to the most people on land projected to be below average annual coastal flood levels by 2050.

Together, those six nations account for roughly seventy-five per cent of the 300 million people living on land facing the same vulnerability at mid-century.

Some countries have already taken drastic measures to respond to mounting coastal flood risk at least partly driven by sea level rise. Indonesia, for example, has taken the decision to move its capital from Jakarta to higher ground on the island of Borneo. As oceans continue to rise, large-scale initiatives like this will become more and more common.

Sea level rise is a global story, and it affects every coastal nation

How can the most affected coastal cities prepare themselves for the inevitability of rising seas?

A number of cities throughout Asia – in Bangladesh, China, India, Indonesia, Viet Nam – include land whose elevation was determined by CoastalDEM to be lower than the local high tide line. That’s probably an indication that natural or man-made defences like sea-walls, dykes and levees are allowing people to live there today.

You can see examples of these in Shanghai, as well as in the Netherlands and New Orleans, where extensive coastal flood control projects protect large cities. But as sea levels continue to rise, so will the cost to maintain and improve those defenses, and so will the cost of failure.

There are also examples of natural defences, like dunes and wetlands and distance from the coast. All of these are likely to be limiting the impact of coastal floods across vulnerable land today, but rising seas will inevitably reduce the protection they offer.

The risk is not limited to Asia. In France, Germany, and the United Kingdom; in Egypt, Iraq, and Nigeria; in Brazil and in the United States, low-lying land is home to large communities that will likely need more protection as the severity of coastal flooding increases.

What is the current situation of the Small Island Developing States (SIDS)?

Our research highlights the severity of the sea level rise risk faced by SIDS, many of which are under-equipped to invest in responses.

In the Maldives, roughly half of the population lives on land projected to fall below the tideline by 2100. In the Marshall Islands, that figure is roughly eighty per cent. As seas rise, coastal flooding in those areas will be more frequent and more severe, which could make them practically uninhabitable well before the end of this century.

These mounting threats are largely the result of wealthier nations’ carbon emissions, and without those nations’ support, SIDS’ governments may not have the resources to help their residents adapt to rising seas.

In the Maldives, roughly half of the population lives on land projected to fall below the tideline by 2100

Your project, CoastalDEM, uses artificial intelligence (AI) instead of the satellite data used by previous NASA models. What does this new technology have to offer?

Understanding the real threat posed by future sea level rise requires a better measure of the ground beneath our feet. That is the purpose of CoastalDEM.

Our work can and should be improved upon, but for planners in many coastal nations, it represents the most accurate source available to assess the risks posed by rising seas.

What are the most crucial steps that governments are being encouraged to take to mitigate the crisis?

Assessing risk using the best resources available is the first, and most crucial step that governments can take to protect the people and places threatened by rising seas. But international efforts to reduce carbon emissions and global warming are essential to managing this risk because they can slow the pace of sea level rise and give vulnerable communities more time to plan and respond to this crisis.

If governments seek to limit future impacts from ocean flooding, they could also avoid new construction in areas at high risk of inundation, while protecting or relocating existing infrastructure and settlements.

Sea level rise is a near-term danger: today’s communities must make choices not just on the behalf of future generations, but also for themselves.

Refugees of the future will be climate refugees, The UNESCO Courier, Number 10, 2009

A question of international solidarity, The UNESCO Courier, July-September 2019