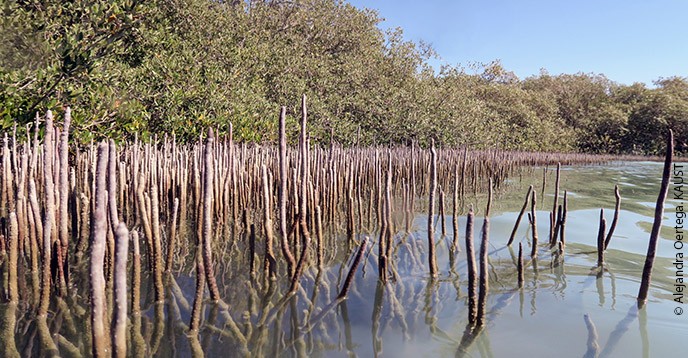 Mangroves fringing a forest in the Red Sea. These productive and diverse ecosystems are declining worldwide, except where reforestation projects have revitalized them.

Conservation measures to protect marine life are already paying off. These actions have made it possible to halt the decline of some species and re-establish degraded marine ecosystems. But restoring the health of the ocean on a large scale requires a more active fight against pollution, overfishing and the effects of climate change.

Until very recently, the future of marine biodiversity did not give us much to be optimistic about. We had lost about half of the biomass of large marine animals and the extent of key ocean habitats – even more, in some cases. This was not just based on statistics, but sadly, also my personal experience. From the Arctic to Antarctica, from shallow coastal systems to the deep sea, I had witnessed many ecosystems – seagrass meadows, mangrove forests and coral reefs that were degraded and then lost.

However, around 2010, something started to change. Increasingly, studies documenting successes – the slowing down of losses, or even recoveries – were being reported from multiple parts of the world. Marine restoration projects were mushrooming around the ocean, and marine protected areas were growing in number and size. And I reported, along with others, on the recovery of various habitats such as mangroves, underwater meadows, and salt-marshes. Endangered species, like humpback whales and elephant seals, also registered an increase in their populations.

To determine whether this was the beginning of a trend reversal, I conducted a first assessment of what actions had enabled these successes in marine conservation – the oldest of which dates back to the 1970s. This assessment confirmed that the recovery of marine life was underway in a number of cases.

On the basis of that initial assessment, I brought together a team of leading marine ecologists to systematically assess the progress, to date, in recovering marine life, and the actions that had enabled these successes. We reviewed the status of key habitats, including seagrass meadows, mangrove forests, salt-marshes, coral reefs, kelp forests, deep-sea ecosystems and oyster reefs. We also studied marine megafauna, such as whales, sharks, sea-birds, and sea-turtles.

Our assessment, published in the scientific journal, Nature in April 2020, showed that loss rates of sea-grass meadows, mangrove forests, salt-marshes had slowed down and, in many areas, these habitats were expanding. Likewise the populations of many large marine species were improving, with some of them displaying impressive comebacks. Forty-seven per cent of the 124 marine mammal populations assessed have seen a significant increase in recent decades, no change was detected in forty per cent, and only thirteen per cent have decreased. Some fishing areas had also improved in status – with a reduction of overfishing in the past two decades, and an increase in the proportion of fish stocks that are sustainably harvested.

These improvements in the components of marine life were rendered possible, in many cases, by policies and actions that were adopted in the 1970s. We realized that their benefits are just becoming apparent, because it takes about two to three decades for those policies to yield the expected outcomes.

In fact, a tide change of ocean recovery is conceivable if we take the necessary actions to catalyse the momentum created by the policies put in place decades ago. We concluded that it is possible to achieve a substantial rebuilding of marine life, to between seventy per cent and ninety per cent of its past wealth by 2050.

This requires protecting species, as a large number of marine species continue to be endangered, some of them critically so. We also need to protect spaces. While in 2000, only 0.4 per cent of the ocean area was protected, this figure is approaching ten per cent in 2020, and is on course to reach thirty per cent by 2030. The protection needs to be active, driven by effective restoration action and the phasing out of destructive and damaging practices.

We also need to remove all forms of pollution – from excess nutrient inputs to persistent organic pollutants and plastics. We have already achieved some wins in fighting pollution. The ocean is now restored from global lead pollution, thanks to the transition to unleaded petrol, which started several decades ago. This is a success that few are aware of, but one that must be celebrated.

We must harvest wisely, reducing catches to rebuild fish stocks, and fighting illegal and unreported fishing. This requires improved regulation and enforcement, and appropriate stewardship of fish stocks in the high seas. This is no longer dependent on self-reporting by fishing vessels, as improvements in satellite technology and artificial intelligence now allow monitoring activities at sea – not just illegal fishing, but also human and drug trafficking. Developing a sustainable aquaculture industry that closes the production cycle within the farm, will also help reduce pressure on wild stocks.

However, climate change is the backdrop against which our success plays out. Failure to mitigate climate change and to meet, or improve upon, the goals of the Paris Agreement will risk wasting many of the benefits of the actions being taken. Importantly, climate change poses the greatest risk for the recovery of coral reefs, which are already experiencing widespread mortality due to the extent of ocean warming – about 1 oC above the average temperature in pre-industrial times – already realized.

It is time for climate action to reach a new level of ambition. Rebuilding the abundance of marine life involves increasing the pool of living carbon in the ocean, therefore also contributing to mitigate climate change. The recovery of mangroves, salt-marshes and sea-grass meadows will be particularly effective, as these ecosystems rank highest in carbon sequestration mitigation across the biosphere. They are also our first line of defence from rising sea levels and increased storms because of climate change.

Solution-focused advances in scientific and technological research will be required to undertake the actions above in a cost-effective and reliable manner. The United Nations Decade of Ocean Science for Sustainable Development (2021-2030) provides a unique springboard to support our capacity to rebuild marine life.

This rebuilding will require significant investments, estimated at $10 billion to $20 billion per year. This may seem a steep amount, but it is a mere 0.02 per cent of global GDP. Yet, this investment is expected to generate significant returns – an estimated $10 for every dollar invested. The main beneficiaries will be insurance and seafood companies, and the tourism industry, along with the many communities that depend on the ocean for food and protection.

Substantially rebuilding marine life by 2050 is an achievable, if challenging, goal. It requires a global partnership of diverse interests – including governments, businesses, resource users and civil society – aligned around an evidence-based action plan. This must be supported by a sound policy framework, a science and educational plan, quantitative targets, metrics for success, and a business plan. The private sector must play an important role, particularly those businesses and corporations that benefit from a healthy ocean. Rebuilding also requires strong leadership to catalyse partnerships, align contributions and build synergies – while keeping up the momentum and overcoming roadblocks and setbacks.

Should we succeed, it would be a historic milestone in humanity’s quest to achieve a globally sustainable future. Leaving a devastated ocean to future generations is not an option. We have the moral obligation to succeed.