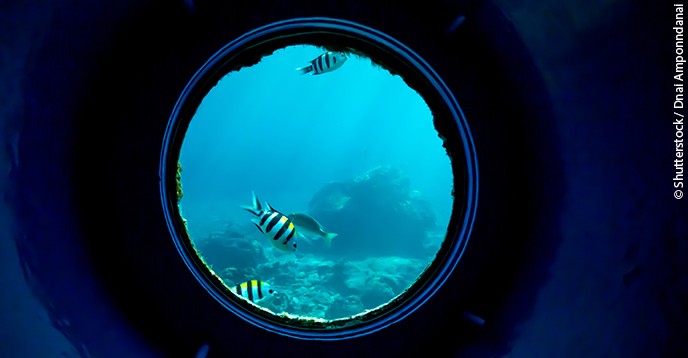 A coral reef, viewed from an underwater observatory.

Global warming, acidification, pollution, and overfishing are threatening marine ecosystems. This decline, which started at the beginning of the industrial age, is accelerating – putting the very survival of the planet at risk. By proclaiming a Decade of Ocean Science for Sustainable Development (2021-2030), the United Nations intends to promote research and strengthen international scientific co-operation to encourage a better understanding of the complex universe that is the ocean. It also aims to find more sustainable ways to exploit its resources. But time is running out. Sixty-six per cent of the marine environment has already been severely altered by human activity.

The plastic foam that floats on the ocean surface, even miles away from the coast, may be the most spectacular symptom, but is just one indicator of the poor health of the marine environment. In study after study, the diagnosis is clear: the ocean – which covers seventy-one per cent of the world’s surface – is becoming warmer, more depleted, and more acidic.

Today, the question is no longer whether these phenomena are causing major upheavals, but rather, at what rate these will occur. The stakes are high, involving the survival of some three billion people who depend directly on the sea for their livelihoods. More broadly, the very future of the planet is at stake.

The ocean acts as the lungs of the earth, producing part of the oxygen we breathe. By absorbing most of the excess heat generated by greenhouse gas emissions since the beginning of the industrial era, it also plays a major role in regulating the climate.

Figures from the Special Report on the Ocean and Cryosphere in a Changing Climate, published by the Intergovernmental Panel on Climate Change (IPCC) in 2019, show that the rate at which the ocean is warming has more than doubled since 1993, compared to the previous twenty-five years.

The warmer the water, the less oxygen can dissolve in it. Exacerbated by agricultural pollution, this phenomenon results in a proliferation of dead zones – areas deprived of oxygen and deserted by marine species. On the high seas, these zones have quadrupled in fifty years. As a result, living organisms that can move, tend to migrate towards the poles. Those that do not have this option, like corals, are condemned to suffer the consequences of heat stress and degradation. A warmer ocean also means more water vapour, a change in the cloud cycle, and an intensification of extreme weather events such as droughts or heavy rainfall.

Warming also leads to thermal expansion of the water, causing a rise in sea levels, which are also exacerbated by the melting of glaciers. According to the IPCC’s most optimistic scenario, the rise in sea levels could reach 0.59 metres by the end of the century. This poses a direct threat to the 65 million people living in Small Island Developing States (SIDS) and the around 680 million people living in areas that are less than ten metres above sea level.

By absorbing nearly a third of carbon dioxide emissions released by humans, the ocean has allowed the atmosphere to remain breathable – but at the cost of altering the chemical composition of the water. Marine organisms with calcium carbonate shells, especially those that make up plankton – which are at the bottom of the food chain – are further weakened by water that has become more acidic.

Marine ecosystems pay a heavy price for this. Already, sixty-six per cent are “severely affected” by human activities, according to a 2019 report by the Intergovernmental Science-Policy Platform on Biodiversity and Ecosystem Services (IPBES). As of now, half the surface area covered by coral reefs has disappeared since 1870, and crucial ecosystems such as mangrove forests have been reduced to less than twenty-five per cent of their extent.

This state of affairs is now relatively well-known. What is less well-known are the cumulative effects of all these phenomena caused by human activities on the state of the ocean. Much remains to be discovered about this underwater world, of which barely five per cent has been explored so far. This is precisely what the ocean sciences are working on – deciphering this complex universe of marine ecosystems and their interactions with the atmosphere.

Bringing together disciplines such as physics, biology, chemistry, geology, hydrography, health sciences, engineering, and the social sciences, ocean sciences are also essential for planning the rational management of marine resources. This is one of the Sustainable Development Goals (SDGs) for the 2030 Agenda adopted by the United Nations: “Conserve and sustainably use the oceans, seas and marine resources” (Goal 14).

But probing the ocean requires research vessels, the use of satellite images, and recourse to underwater robots. All of these technologies require major investments. However, according to the Global Ocean Science Report (GOSR) of UNESCO’s Intergovernmental Oceanographic Commission (IOC), national spending on ocean sciences represents only 1.7 per cent of national research budgets on average, ranging from 0.03 per cent to 11.8 per cent.

The UN Decade of Ocean Science for Sustainable Development (2021-2030) aims to raise awareness of the need to strengthen and diversify sources of funding for these disciplines. It also aims to facilitate international co-operation in the study of the ocean; to identify gaps in scientific programmes; co-ordinate research programmes and marine spatial planning, and reduce marine-related risks to improve the management of ocean resources and coastal zones.

The means to act do exist. Conservation efforts, when carried out successfully, bear fruit. Endangered species, like the fin whale and the grey whale, have seen their populations increase, thanks to international bans on commercial whaling and reduced catches. By using scientific research, and drawing on indigenous knowledge, it is still possible to change our practices to conserve resources and improve the resilience of marine environments. This can be done by regulating fishing and developing marine-protected areas – but only if the harmful mechanism of global warming is halted. It is at this price that a future is possible for the ocean, and therefore, for the planet.