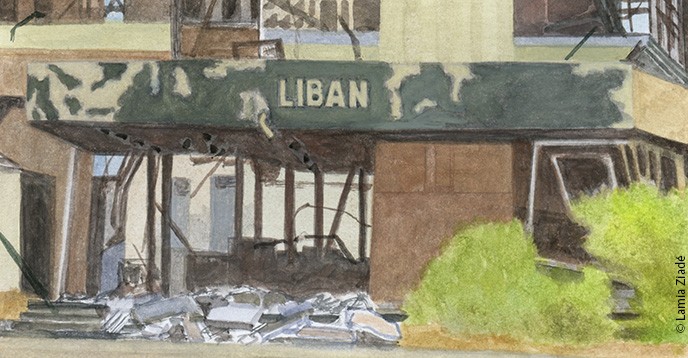 An illustration depicting the destruction of the headquarters of state power company Electricité du Liban after the explosion.

An expert in sustainable  urban development, Camille Ammoun’s work aims at making cities more liveable and more resilient. He is also an author, who explores ways to address urban issues through literature. His latest book, Octobre Liban – which takes readers on a walk through the streets along the port of Beirut – is an uncompromising portrait of a city with a convulsive history. The story ends with the August 2020 explosion that destroyed entire districts of the capital and has caused lasting trauma to its inhabitants.

In Octobre Liban (Lebanese October), you walk along a street in Beirut, beginning with the protests in October 2019 demonstrations and ending with the explosion on 4 August 2020. What did you observe, as a writer and urban planning specialist?

This text was born out of the October 2019 demonstrations, when I was walking along the street that runs along the port, and has three names: Rue d'Arménie, Rue Gouraud, Rue Émir-Bachir. It was also nourished by my memories of the city. In fact, the desire to convert my wanderings into a book predates autumn 2019.

Beirut is a city in motion that slowly rebuilt itself after the civil war (from 1975 to 1990). Its neighbourhoods have gradually and organically regained an economic vitality driven by small shops and craftsmen. In the mid-2000s, the districts of Gemmayzeh, and later, Mar Mikhäel, became the epicentre of Beirut nightlife and the source of unbridled artistic creativity – while Bourj Hammoud remained the economic heart of the city.

This spontaneous recomposition of the urban fabric has occurred in all the neighbourhoods  bordering this street. All, except one: the historic city centre. Rebuilt by a private realtor, it illustrates the inability of real estate capitalism to make a city. The last stage of the narrator's wanderings, this city centre is totally disconnected from the rest of the city today. Yet, in October 2019, when the inhabitants took it over with their protests, it became the beating heart of the revolution.

While telling the story of this walk through the prism of the October demonstrations, a new perspective came to me. From the Bourj Hammoud rubbish dump on the outskirts, to the seat of government perched on the Kantari hill, the distance is just over four kilometres. Yet this is enough to measure the tragic nature of the city and the way in which the country, like a sleepwalker, has walked towards its ruin.

The Beirut River, which receives the city's wastewater before discharging it into the Mediterranean, the destruction of the Grande Brasserie du Levant [the Middle East’s oldest brewery] by a real estate developer, the abandoning of the [Mar Mikhäel] railway station when all the surrounding roads are congested, and, of course, the port of Beirut, are all symptoms of the evils eating away at the city.

How would you define the uniqueness of the Lebanese capital?

I don't think Beirut is unique. Like many cities in the world, it is marked by community and social divisions, a disintegration of the urban fabric driven by property developers and corruption. It suffers from a lack of urban planning, is polluted, and lacks public spaces and efficient transport. If there is something unique about this city, it is perhaps the fact that it combines all these phenomena and offers an exacerbated version of them.

In what way have the inhabitants reappropriated this city? How do they inhabit it now?

During the mass demonstrations of autumn 2019, the Lebanese reappropriated certain public spaces such as the Martyrs' Square and the Riad El Solh Square in Beirut. Coffee vendors, roasted corn-on-the-cob vendors, second-hand bookstalls, all appeared there. Iconic buildings such as The Egg or Beirut’s Grand Théâtre were occupied, and used differently. Tents were erected, and a veritable agora [a public open space] was created. A thirst for knowledge, understanding and expression was reborn. Life returned to the city’s empty centre.

Roads across the country were also blocked by the demonstrators. In Jal el Dib, for example, a section of the northern highway – a vital artery leading to the capital – was occupied by its inhabitants. These actions were heavily criticized. They were seen by some as the cause of the paralysis of the Lebanese economy. In reality, it was the only way the inhabitants could find to express their anger and frustration. In doing so, they created public spaces ex nihilo [out of nothing] in a city which is cruelly lacking in them.

These are places where social bonds are forged, where people can meet and find each other. They are all the more essential now that property developers are in the process of tearing down the city. The buildings that  make up the urban fabric are increasingly giving way to buildings with car parks on stilts. In a city without a ground level, people stop wandering or strolling around – letting chance guide their steps, and making random encounters. It is precisely these encounters and wanderings that form the core of a city's artistic activity and creativity, and give it its soul.

While Beirut's city centre is already a museum-like and unaffordable space, the rest of the city also threatens to become a city of parking lots on stilts. It is urgent that measures be taken to safeguard its urban stratification, its history, culture, and way of life.

Beirut has gone through multiple crises in the past decades, but it has always managed to recover. What explains this resilience? Has it been undermined by this latest ordeal?

“Beirut has died a thousand times and been reborn a thousand times,” writes the poet Nadia Tuéni. Her words echo a popular legend: “Beirut has seven times been destroyed, and seven times rebuilt”. For years, we’ve talked about the Lebanese as always being able to rise again. But the apocalypse of 4 August has overwhelmed this legendary resilience. We are not resilient and we are not all right. That’s what messages exchanged on social networks after the explosion simply stated: “We are not ok!”.

The apocalypse on 4 August has overwhelmed Beirut's legendary resilience

A resilient city succeeds in maintaining its urban continuity in spite of hardships. Until then, Beirut always seemed to recover, but with the price of many scars. It is not a resilient city, it is a city that is fighting, a wounded city, a tired city. And today it is only a shadow of its former self, a shadow of the city it could have been. Entire districts of the city centre were razed to the ground in 1990, historic buildings were destroyed by property developers – and then by the explosion of 4 August. What is lost is lost forever.

What are the most visible scars left by the explosion that destroyed parts of the city?

First of all, there is the trauma that has haunted the people of Beirut since the explosion. It may not be visible, but it is powerful. A total of 300,000 people lost their homes and had to find shelter with relatives. The rebuilding will take time.

On the physical level, the areas that have suffered the most are neighbourhoods with great social diversity, and a large number of buildings belonging to Beirut's architectural heritage. According to Jad Tabet, president of the Lebanese Federation of Engineers and Architects, thirty-two of these buildings are completely destroyed and 300 more are at risk of collapse. Their sandstone walls, arches, wooden frames and tiled roofs, the woodwork on their façades, and the marble on their balconies, did not withstand the impact of the explosion.

In spite of their gentrification, the districts of Mar Mikhäel and Gemmayzeh have retained a high level of social diversity, due to the rent controls that have allowed the original  inhabitants to stay there. What is at stake with the reconstruction is maintaining the social fabric of these districts, their economic dynamism and creativity.

How do you envisage the reconstruction?

In order to avoid repeating the mistakes of the past and to prevent developers from preying on these neighbourhoods, it is essential to establish a legal framework for the reconstruction and restoration of the areas affected by the explosion. Urban governance must involve the inhabitants, taking into account their opinions, their practices and the way in which they view their city. Without effective, enlightened and inclusive urban governance, the city of Beirut – well beyond the areas damaged by the explosion – will continue its slow decline.

There is reason for hope. In spite of its setbacks, in spite of the destruction, Beirut retains an extraordinary urban potential, thanks to its dynamism, culture, creativity, demography and geography – but also by what it evokes in the collective imagination. Today, this urban potential must be able to express itself fully, and those who bear this creativity must be able to take decisions.