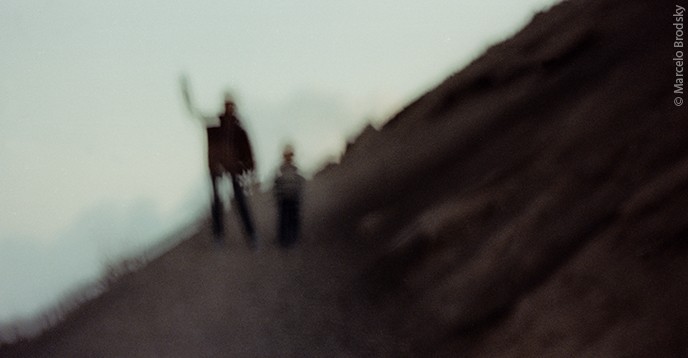 On the Jetty, Port of Barcelona, 1979, by Argentinian photographer, conceptual artist and political activist Marcelo Brodsky, from his book Nexus, 2001 – part of a series on migrants and exile.

The psychological distress suffered by migrants and refugees has been ignored for a long time. But this is changing, with the introduction of services like the Specialized Psychological Services for Immigrants and for Refugees at the Jeffery Hale Hospital in Quebec, which addresses the symptoms of patients taking into account the culture of their origin.

Assane Traoré*, now a refugee in Quebec, recently left West Africa, where he witnessed massacres and violence perpetrated by jihadist groups. In the evenings, he locks himself in with his family, pulling the shades to cover the windows. He constantly feels he is being followed.

“He’s here, but still [thinks he’s] over there, like many others,” explains psychologist Jean-Bernard Pocreau, retired tenured professor at the School of Psychology, Université Laval, Quebec, and co-founder of the Specialized Psychological Services for Immigrants and for Refugees (SAPSIR), who treated Traoré. “What was relevant in his home country no longer matters here. His anxiety is affecting his family.”

Normally, migrants do not suffer from mental health issues any more than the general population (one in four people in their lifetime, according to the World Health Organization). But their specific experiences before migrating and in the host country may increase their psychological distress.

Migrants who have the opportunity of returning to their home country may be prone to depression, and may idealize the life they left behind. “This sadness can actualize or exacerbate previous latent pathologies, if there were fragilities or vulnerabilities originally,” Pocreau says.

But for asylum seekers and refugees who have experienced separation and heartbreak, the grief can be severe. They are susceptible to depression and anxiety, family conflicts, and post-traumatic stress accentuated by exile.

This often results in physical disorders affecting the head, digestive system, or the spine. “Their suffering is still very real, even if it has no observable physical basis,” according to Pocreau. “Many migrants from traditional cultures perceive their difficulties in ways that are very different from ours. This is why we must, first of all, decode their reading of the situation.” These different pathologies primarily affect self-confidence, social ties, and their perception of the future.

Migrants and refugees also suffer, to varying degrees, from the institutional violence and repeated attacks that may occur in their host country. Take, for example, the case of a survivor of the Rwandan genocide who lost her family and some of her children during the conflict, but managed to build a new life in Quebec. One evening, she was attacked while leaving work. “This attack reawakened all her previous traumas,” recalls Pocreau. “The recovery of her vitality [in her new country] collapsed. Irrationality took over, and made her feel that she was always in danger, wherever she was.”

The contribution of ethnopsychiatry

“At the turn of the millennium, migrants and refugees felt misunderstood when they approached the health-care system during episodes of psychological distress,” explains psychologist Lucienne Martins Borges, professor at the School of Social Work and Criminology, Université Laval, and co-founder of SAPSIR. “We were aware of this issue, so we created a service for them.”

At the turn of the millennium, migrants felt misunderstood when they approached the health-care system during psychological distress

Based in premises adjoining the Refugee Health Service of the Jeffery Hale Hospital in Quebec City, SAPSIR is a part of the publicly-funded health establishment. “For complex situations, the large-group approach is best,” Borges says. The team includes the person who first refers the individual to the service, a senior psychologist and a co-therapist, a social worker, a nurse, and an interpreter and cultural mediator.

“The people we see are often from collectives or community organizations, so they respond better to group interventions,” she adds. Depending on the case, there are also small-group follow-ups. Some cases may be seen by a small team of two or three professionals, and rarely, individual follow-ups.

“During these meetings, we must really build on the person’s culture, the elements that have shaped him or her, and that have meaning for him or her,” Pocreau explains. “We must gradually enter their world and then work together to weave and construct an understanding that will allow them to bond. This is crucial if the person is to accept the treatment and consider it is relevant and useful for them.”

This approach is derived from ethnopsychiatry, which accords a central place to the cultural dimension in the expression of psychological symptoms. The team meets the person fifteen to seventeen times, and then supervises the intervener who takes over. That is how the SAPSIR approach has spread throughout the country.

“I’ve been in this field for a quarter of a century and I can tell you that we are witnessing an evolution among the interveners,” Pocreau insists. He is confident that some professionals in Quebec are now inspired by ethnopsychiatric thinking and the intercultural clinical approach to treating the psychological suffering of migrants.

Restoring confidence in the future

Migrants and refugees need physical and psychological security and to feel reassured that they are able to make plans for the future. They need to know how they can continue to be themselves in a new place. They need time, a  protective net, and people around them, to feel a sense of security.

An example of this is the case of a South American agricultural engineer, who was imprisoned by militias after having been heavily involved in rural communities. His captors had trapped him in a bag, thrown him into the water and shot at him. He miraculously escaped, but when he arrived in Quebec in a state of major depression, he was unable to imagine a future for himself.

This changed once he got involved in a local initiative to save a river in Quebec. “He found himself in a familiar situation, in a world he knew that made sense to him,” explains Pocreau. “This is what allows the person to experience the coherence and continuity of the self.”

“It’s like a before-and-after advertisement for plastic surgery,” enthuses Borges. “You can physically see the change. You go from being a stooped, lifeless person in distress to someone who quickly becomes more invested, smiling, and confident about the future. If we hadn’t seen these results in therapy, I don’t think we would have had the energy to continue [with our work].”

“There are also times when we lose contact with people who carry an  aggression that is not their own, who are sad and depressed,” adds the therapist. “They no longer trust other people and are unable to maintain a link with us.”

“Our system responds to a need, and the majority of the people we see find meaning in their lives again,” says Borges. She is concerned that an interruption in SAPSIR’s service for children has affected them – the programme is back on track in autumn 2021.

“What worries me are all those people who do not reach us, especially the children, many of whom are traumatized. That’s what keeps us awake at night right now,” she concludes.

*Some names have been changed to protect the identities of those interviewed.

Learn more about UNESCO's International Coalition of Inclusive and Sustainable Cities (ICCAR) initiative, which aims to emphasize the contribution of migrants and refugees to the development of host cities.

A warm welcome versus hostility, The UNESCO Courier, April-June 2019