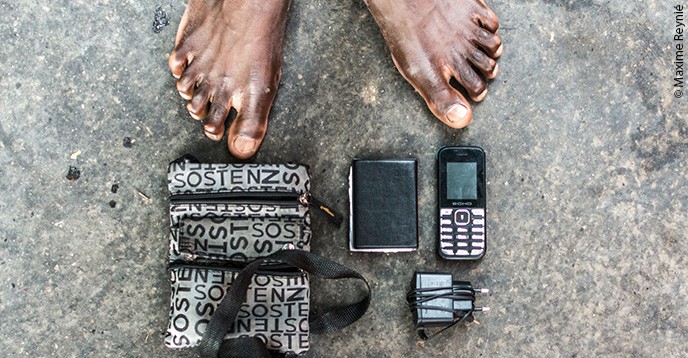 A notebook, a bag and a mobile phone is all that 25-year-old Saeed brought with him when he fled Sudan for France. From the series In the bag of refugees, by French photojournalist Maxime Reynié.

Smartphones have become crucial to the survival of migrants and refugees – enabling them to keep in touch with their families, seek financial help in times of need, and to find the information they require to continue on their often perilous journeys. A study in Fez, Morocco, led by the author, highlights the critical importance of mobile technologies at every stage of the way.

Moha Ennaji
Linguist, author and activist, he is President and Co-founder of the International Institute for Languages and Cultures (INLAC), and a Professor of Linguistics and Cultural Studies at the Sidi Mohamed Ben Abdellah University in Fez.

“Sometimes I have to choose between food and internet connectivity, to keep in touch with my family back home. When I need money, I make a call to them via WhatsApp, and they send it very quickly.” This is how Mamadou, a 22-year-old from Niger, sums up the key role that smartphones now play in the lives of migrants. The fact that refugees can spend up to a third of their budget on internet access – according to the Rabat office of the UNHCR, the United Nations Refugee Agency – is proof of how important these portable devices are.

When migrants leave their home countries, they are entirely dependent on their mobile phones. Smartphones and tablets have a significant impact on their experiences at every stage of their journey. This is what emerged from the fieldwork I conducted – with Filippo Bignami, a senior researcher and lecturer at the University of Applied Sciences and Arts of Southern Switzerland (SUPSI) – between 2017 and 2019 in Fez, with refugees and illegal migrants from Syria, Libya, and sub-Saharan Africa.

Since the mid-2000s, Morocco, which has long been a land of immigration, has become a place of transit and reception for a large number of migrants from sub-Saharan Africa – notably Congo, Côte d'Ivoire, Mali, Nigeria, and Senegal. They hope to reach Europe, either via the Spanish enclaves of Ceuta and Melilla, or via the Canary Islands, before crossing the Mediterranean or the Atlantic Ocean. Although they usually consider their stay in Morocco a mere stopover, many migrants end up staying for months, or even years, in difficult conditions.

The people we interviewed had varying levels of education, which influenced their “digital literacy”, or their ability to take advantage of the opportunities available to them via the internet and mobile technology networks.

Not surprisingly, we found that smartphones support migration flows by providing migrants with online information leading up to the trip – often influencing their motivation to leave, the choice of routes and final destinations, and then throughout the journey.

They also facilitate co-operation and mutual support between migrants. Illegal migrants tend to be more dependent on unofficial sources of information – especially information provided by smugglers.

Smugglers have the advantage of being familiar with the routes, border crossings and visa procedures. The migrants we spoke to said they had received accurate information from the smugglers, who often used social networks to provide assistance during the journey.

Regis, a 23-year-old from Cameroon, followed directions from his smuggler via text messages from his home country all the way to Fez. However, some migrants refuse to rely on the services of smugglers, and prefer to continue their journeys using navigation tools like GPS and Google Maps.

A comforting link to loved ones

For those who are driven to take the uncertain and often perilous routes of migration, mobile phones are also – perhaps above all – a comforting link with the loved ones left behind. They are kept informed of travel conditions via messages and photos exchanged on WhatsApp, Messenger, Telegram, or Facebook.

The moral support provided by families is accompanied by financial support in many cases – which often determines whether or not the journey continues. The funds provided by the family are usually transferred directly, using mobile technology. “Without my smartphone and social networks, I would feel more excluded and isolated,” says Yaya, a 22-year-old from Guinea. “I use it to ask my friends for help, and to keep in touch with my family.”

But new technologies provide no protection against all the risks associated with illegal migration. Our research revealed that better-informed potential migrants are not necessarily more successful in reaching their desired destinations. In spite of their efforts, they are just as likely to be victims of robberies and assaults, or subject to security devices that turn them back at borders – forcing them to remain in the transit country in many cases.

New technologies can also be sources of false information and rumours that can influence the choices of potential migrants. Ibrahima, a 23-year-old from Côte d'Ivoire, decided to leave his country after reading on the internet that, once he arrived in Morocco, he would be sent to a European country as an asylum seeker who was attending school. After he realized that this was not the case, he risked his life every night trying to get onto a truck heading for Spain. Stories like this are quite common among illegal migrants.

Those who do manage to reach their destinations could also contribute to influencing future migrants, by sharing information and images about their new life via messaging apps and social networks.