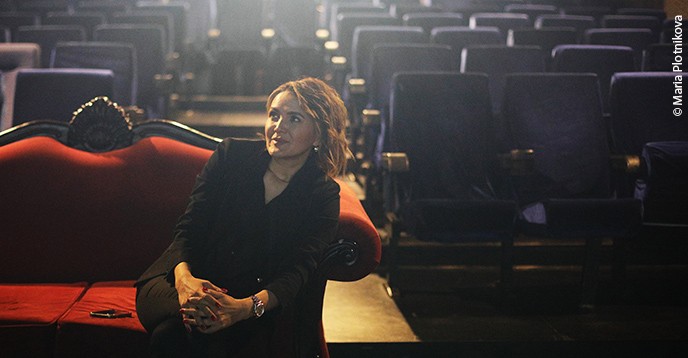 Venera Toktorova takes a front seat at Manas, the Kyrgyz cinema hall in Moscow that she helped found, August 2021.

When she arrived in Moscow over a decade ago, Venera Toktorova endured the typical fate of immigrants from Kyrgyzstan, taking on a series of tough, low-paid jobs. Today, after years of hard work, she is a successful entrepreneur who owns two restaurants, and the only Kyrgyz movie theatre in the city, which she co-founded.

In a lively café filled with Asian music in Moscow’s east, a woman watches the comings and goings of the servers with an authoritative eye, while checking her mobile phone from time to time. Wearing a light-coloured dress and her hair neatly tied back, Venera Toktorova, 40, is the owner of the Sulaiman-Too – named after the sacred mountain of her homeland.

Thirteen years ago, Toktorova left the small town of Osh in Kyrgyzstan after a divorce, and moved to the Russian capital with her three-year-old daughter. She was destitute at the time, and had nowhere to go. But nothing daunted the determination of this woman who, as a child, had sold chewing gum and cigarettes at the local bazaar after school to help support her family.

With a degree in economics, she could have become a teacher in her country. “I can imagine how difficult life would have been, with a salary that barely covered basic expenses,” she says. The average salary in Kyrgyzstan is about $200 a month – the lowest among countries in the region. In 2019, there were more than 1 million migrants from Kyrgyzstan in Russia.

When she arrived in Moscow, she followed the path that is typical for migrants from this Central Asian country. “At that time, they were usually employed as maintenance workers and lived in basements,” recalls Toktorova, who initially lived in a basement with her daughter. At first, she worked as a janitor in a posh building, and then as a house cleaner, to pay for her daughter's schooling. She chose to turn down better-paying jobs that would have forced her to leave her child with a nanny. “It was important for me to see her grow up,” she explains.

The power of dreams

Through sheer hard work, she managed to save enough money in a year to buy a small apartment in Osh. “I used to get up at dawn to clean for my first employer, I would then take my daughter to school, and go back to work. Then I would leave to pick up my daughter, and when she was in bed, I would go to another employer to clean the floor. I felt like a hamster on a wheel,” she remembers.

Besides working hard, Toktorova, who has not remarried, was also driven by a dream – she imagined a more comfortable life for herself, and a place to call her own.  “Today I have my own apartment in Moscow, and a big TV screen. This is proof that dreams do come true!” she enthuses.

Over the years, the idea of returning to Kyrgyzstan has faded. The desire to provide her daughter with a quality education, and her own success, have led Toktorova to keep postponing her wish to return. “I left Moscow so many times telling myself that I would never return, but each time I came back,” she admits.

She has certainly come a long way since her arrival. Now an accomplished entrepreneur, Toktorova co-owns two restaurants. But though she has settled in Moscow, she has not severed her ties to the country of her birth.

Three years ago, Toktorova started the only Kyrgyz cinema hall in the Russian capital, with several partners. A lack of experience and management errors quickly led to the failure of this venture. However, the few months that the Manas cinema existed were enough to create a need among her compatriots – who actively campaigned for its reopening.

Named after a famous Kyrgyz epic, Manas Cinemas is today one of Moscow’s main Kyrgyz cultural attractions. People from Kyrgyzstan come here to be entertained, but just as much to cure their homesickness. Many confess to Toktorova that they enjoy watching Kyrgyz films abroad more than they did at home. When they leave, they always thank her for giving them the opportunity to see a film in their own language, and in the setting of their childhood.

A renaissance of Kyrgyz cinema

In recent years, Kyrgyz cinema has gained a new vitality. The seventh art had reached its peak locally in the 1970s. This was the time of the “Kyrgyz miracle”, when young directors adapted the works of the writer Chingiz Aïtmatov (1928-2008) for the big screen. But after Kyrgyzstan became an independent country in 1991, the film industry was deprived of subsidies and went through a period of decline.

Today, a new generation of filmmakers has emerged, bringing commercially viable projects to the big screen that have found their audience. As a result, Kyrgyz films have found their place alongside international productions.

In 2018, on the occasion of the 90th anniversary of Aïtmatov's birth, the Kyrgyz embassy in Russia gifted a collection of films adapted from his works to Manas. This allowed the film theatre to programme Kyrgyz films from the “Golden Age” free of charge for an entire year. “It was a wonderful gift,” says Toktorova, admitting that she only recently discovered the richness of Kyrgyz cinema.

Thirteen years after leaving Kyrgyzstan, the successful entrepreneur says she can imagine herself living in Moscow for a few more years. “Here I’ve had to work hard and overcome difficulties, but I’ve blossomed in this new life. I’ve learned to think differently, and I’ve become stronger.”

In Moscow, I’ve had to work hard, but I’ve blossomed in this new life

Still, Toktorova has never quite given up the hope that she will return to live in her homeland one day. “No matter how educated or how successful we are, we migrants always have the strong feeling of being from somewhere else.”