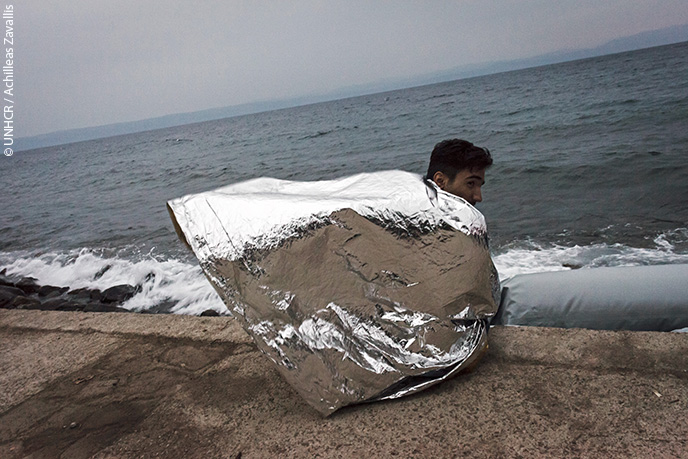 A young Afghan refugee tries to keep warm in an emergency blanket at the port of Skala Sikamineas, after arriving on the Greek island of Lesbos in an inflatable boat.

Families forced out of their homes by war, makeshift camps on the outskirts of cities, survivors of perilous sea crossings – news channels have become used to trivializing images of migrants, who are too often reduced to an archetype of contemporary misfortune. These news items reflect very real situations, like those currently being experienced by civilians trying to flee Afghanistan.

The tragic side of migration, however, far from summarizes the complex, plural, and changing reality of this major twenty-first century phenomenon. In 2020, the International Organization for Migration (IOM) estimated that the number of international migrants worldwide was 272 million. These people left their home countries to flee violence, natural disasters, or the effects of climate change – but also to study, work, and invent a new life somewhere else.

Introduction
Nigerian migrants: Pursuing the dream at any cost
Refugees: Overcoming prejudices
Peru faces a surge of climate migrants
In Canada, a centre to treat the wounds of exile
Mobile phones: An indispensable tool for migrants
Venera Toktorova: A Kyrgyz migrant makes her way
The Overseas Chinese: A long history
Eva-Maria Geigl: “The history of humanity is made up of a succession of migrations”
Teeth: Mapping our past mobility