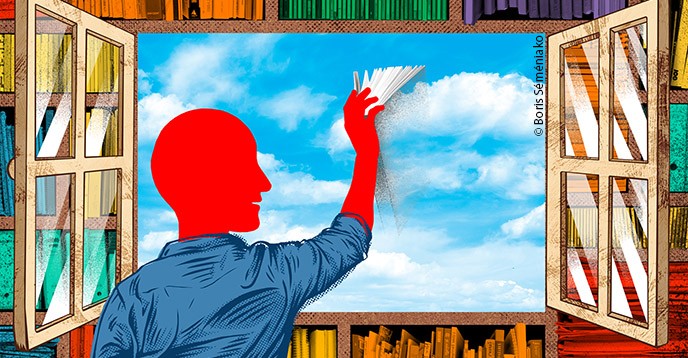 The Covid-19 pandemic has led to real advances in the way scientific data is shared. But there is still a long way to go before open science truly encompasses unhindered access to scientific publications, data, and collaborative research. While the idea of a common good is gaining ground – especially among the younger generation of researchers – the commodification of scientific knowledge continues. The entire relationship between citizens and science is at stake when we consider these issues.

The Covid-19 pandemic has allowed us to observe a great surge of collaboration and sharing of scientific knowledge among researchers – in the effort to cope with the virus, provide the most effective treatments, and especially, to find a vaccine. We have seen barriers fall when the major scientific publishing groups – such as Elsevier, Springer Nature, and Wiley – opened access to thousands of research articles. This allowed scientists from all over the world to read them, keep up with research advances, and thus, accelerate their work.

Data and metadata – the data that describes other data – were also opened up and shared among groups of scientists. For a time, scientific knowledge, a common good, escaped from the old and well-established forms of commercial appropriation that do not favour the dissemination of scientific knowledge.

This new collaboration has relaunched discussions in favour of an “open science”. If the need for openness is felt so strongly today, it is because science – when it comes to the publication of its results – has become partly inaccessible. Besides being very costly for researchers to  produce, trusted publications are also too expensive for many of the libraries that would like to subscribe to them.

The commodification of scientific knowledge

An analysis of the historical conditions that have led to the emergence of movements in favour of open science shows us that this “closure” is deeply rooted in the long march towards the commodification of scientific knowledge. Since the end of the Second World War, scientific knowledge has been a highly profitable market – bringing in billions of euros per year for its main actors, the scientific publishers.

In their current formulation, the demands for opening up science are more aligned with the commercial and managerial rationales that have defined the organization of science since the 1950s, than they are with a denunciation of the totalitarianism that provoked the Second World War.

However, they are also related to earlier assertions by the American sociologist Robert K. Merton [1910-2003] and the Austrian-born British philosopher of science Karl Popper [1902-1994]. They denounced these monopolies as new forms of commercial totalitarianism that appropriated a common good, scientific knowledge – created and produced with the help of public actors and public funds.

Accessibility, sharing, transparency, reuse, and an interaction with society are all values championed by open science. These values can now be translated into concrete terms, thanks to digital platforms and infrastructures. This “reformulation” should also be seen in the context of the evolution of our societies. Science must renew its links by taking into account phenomena such as the spread of fake news, the rise of populism, and the exacerbation of inequalities.

Accessibility, sharing, transparency, reuse, and an interaction with society are all values championed by open science

The pandemic has made it possible to publicize another phenomenon related to the opening up of science, previously confined to the academic sphere. We are now witnessing the emergence of a new generation of web-based platforms, managed by scientific communities that are adopting the principles of open science, its good practices and its standards.

Young researchers, who have an important place in these communities, are testing, innovating and experimenting to reinvent the model of scientific communication and make it more open – including to society, which can contribute to the process through comments. These young people belong to the generation that grew up with the web and digital technology. They are not afraid to shake up a system that is impenetrable without the “open sesame” effect that being published in prestigious, ultra-selective and very expensive journals represents.

Some of these platforms have played a crucial role in the dissemination of scientific information on Covid-19. Researchers were able to share their results in real time to move forward faster and more collaboratively. These platforms base their value on advanced features and services that depend on artificial intelligence for their development – especially to cope with the incessant flow of resources. Although they do not offer peer review in the traditional sense, they are experimenting with models that allow a form of expertise to be conferred on articles, based on the collaborative mobilization of communities.

Private research funding agencies – such as the Bill & Melinda Gates Foundation and the Chan Zuckerberg Initiative – are taking an interest in these new models and supporting them. This support offers real funding opportunities, but it also presents risks of recuperation, or even a takeover, as we have seen in the past.

The interest in open science is not limited to the academic community – it is now on the European and international political agenda. This movement goes beyond open access to scientific publications. It also includes the opening of research data – according to the principle of “as open as possible, as closed as necessary” – and the citizen science that characterizes the twenty-first century. Some countries are beginning to adopt policies for sharing scientific knowledge.

In another manifestation of this interest, UNESCO submits its Recommendation on Open Science to Member States in November 2021, to facilitate international co-operation and universal access to scientific knowledge. These recommendations cover publications, data, software and educational resources, and citizen science, to emphasize the importance of keeping science in the hands of academic communities and citizens. They can then work together to ensure that the objectives of scientific advances are defined without the logic of monetization and its constraints.

This national and international policy context has fostered a research framework that would have seemed utopian even twenty years ago. The number of open access publications worldwide continues to grow – it is estimated that by 2030, seventy-five per cent of publications will be open access. The awareness of open access to research data is growing, and an understanding of the relevant issues and practices is increasing. New forms of scientific exchange – using social networks and video – are being improvised at the initiative of the researchers themselves.

The major scientific publishing groups who were earlier sworn opponents of open science, have now become zealous defenders of openness. To do this, they are migrating their digital platforms to support the ongoing transformation.

Negotiations between publishers and libraries over subscription rates have now become negotiations for “transformative agreements” – where the focus is on the rates for publication in the publisher's journals, or the number of articles that can be published for the same price. These issues are crucial at a time when universities are trying to improve their international rankings – which take into account the number of publications.

Open science is therefore being developed at the crossroads of increasingly internationalized policies and more active communities – whose initiatives and practices are being rejuvenated and organized around models created outside pre-existing patterns.

The new models that are emerging are trying to escape the monopolies of the past. It is around these issues that the transformation of science is taking place – freedom from the exclusionary logic of monetization; from inequalities in access to knowledge; and from new forms of monopoly exacerbated by digital technologies. All this to better face the complex challenges of society.