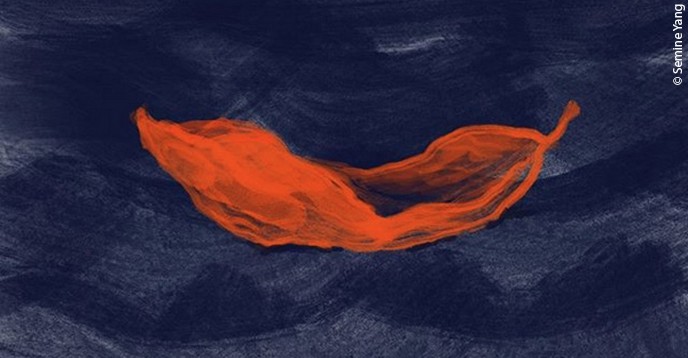 Floating, a digital drawing by Semine Yang, an artist from the Republic of Korea living in France.

Families forced out of their homes by war, makeshift camps on the outskirts of cities, survivors of perilous sea crossings – news channels have become used to trivializing images of migrants, who are too often reduced to an archetype of contemporary misfortune. These news items reflect very real situations, like those currently being experienced by civilians trying to flee Afghanistan.

The tragic side of migration, however, far from summarizes the complex, plural, and changing reality of this major twenty-first century phenomenon. In 2020, the International Organization for Migration (IOM) estimated that the number of international migrants worldwide was 272 million. These people left their home countries to flee violence, natural disasters, or the effects of climate change – but also to study, work, and invent a new life somewhere else.

This figure, which continues to rise, is frequently exploited by those who use it as a political weapon, to argue that migrants – convenient scapegoats for the fears and frustrations of host communities – pose a real threat. These fears are exacerbated during a pandemic, fuelled by preconceived notions and prejudices about migrants, which serve to  obscure well-established data – particularly that population movements primarily occur between low- and middle-income countries, and that nearly half of all migrants do not cross borders.

These prejudices also fuel rejection, racism, and even discrimination, against the new arrivals. Women are particularly penalized. It is precisely to encourage living together and to reduce this kind of discrimination that UNESCO set up the International Coalition of Inclusive and Sustainable Cities (ICCAR).

The Organization is also keen to remind us that behind the dry statistics, there are thousands of human destinies, countless stories – sometimes terrible, often happy – and the richness of a cultural mix that is part of our lives and our collective history.

Does the term migration still mean anything in our globalized societies, which are characterized by an intensification of exchanges and travel, where “somewhere else” is now within reach of many people?

In Le Métier à métisser, the Haitian writer René Depestre invites us to rethink the very idea of exile: “The process of globalization is a call to render outdated and obsolete the belief that, to have an identity, one must stay at home, smelling the aroma of one’s grandmother’s coffee.”