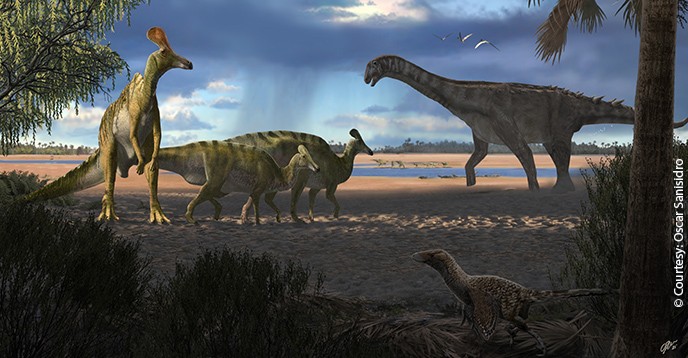 The four-legged long-necked herbivorous dinosaurs, Titanosaurian sauropods (right), were exceptionally prevalent in Latin America, but lived all over the world.

In recent years, there has been such a proliferation of major palaeontological discoveries in Latin America, that the region is sometimes referred to as a “dinosaur factory”.
Miriam Pérez de los Ríos, a palaeontologist and specialist in the evolution of Miocene hominoids – apes  who lived 23 million to 5 million years ago – explains that these scientific advances are the result of an increased interest in the discipline, and the significant contribution of new research methods.

What is the significance of the recent discoveries in Latin America?

Latin America, and the Southern Cone in particular, are of great relevance for our understanding of the origin and evolution of dinosaurs. Many discoveries have been made, in the region of  La Rioja in Argentina, a country with a long palaeontological tradition. One of the oldest known dinosaurs, Eoraptor lunensis, discovered in 1991, lived in the region some 230 million years ago. Teams in Brazil are currently searching for an even older specimen in the border area.

One of the oldest known dinosaurs was discovered in Argentina

There are numerous records of these animals throughout the Mesozoic era, between 250 million and 66 million years ago. Remains of these dinosaurs can be found on all five continents, until their mass extinction at the end of the Cretaceous period, 66 million years ago. The specimens found in the region cover their entire time on earth – they became extinct at the same time as their counterparts on the rest of the planet.

However, excavations in the Southern Cone of Latin America have uncovered the remains of titanosaurs – the largest dinosaurs – belonging to unique species such as Chilesaurus diegosuarezi, one of the few known herbivorous theropods. The excavations have also led to the discovery of the southernmost dinosaurs, represented by a huge sauropod found in Torres del Paine, Chile.

Do these discoveries change what we already know about dinosaurs on a global scale?

Of course they do, because in palaeontology it is essential to compare the specimens discovered with those already identified to establish their phylogenetic position – that is, their familial relationships to other dinosaurs. Further excavations and the comparison with known remains allow us to understand their evolution and to evaluate, through the observation of morphological changes, how speciation [the formation of new and distinct species in the course of evolution] has occurred.

This is how the National Museum of Natural History in Santiago, Chile, was able to demonstrate, in April 2021, that the remains found in the Atacama Desert in the country’s north, some thirty years ago, belonged to a newly discovered species of titanosaur, Arackar licanantay.

How do you explain such a succession of discoveries in Latin America in recent years?

These latest discoveries demonstrate the progress being made in Latin America in the study of sciences such as palaeontology. Historically, Argentina has led the expertise on the fossil record   in the region – due to the great interest in this discipline, and the presence of leading palaeontologists such as José Fernando Bonaparte, who discovered more than twenty species, and Rodolfo Casamiquela, a specialist in the remains of these large saurians.

In other countries, including Ecuador, Colombia, Chile, Brazil, and Peru, there has been an explosion of knowledge in recent decades – thanks to the work of different teams affiliated to  universities and research centres, some of which are associated with international teams, mainly from the United States.

Does the evolution of study techniques play a role in the frequency of discoveries?

I would say that the frequency of findings does not depend so much on the methods used – which are still quite traditional – as on the creation of local teams with a high level of scientific training. In recent years, many young scientists who went to study for their doctorates in the US  or Europe have returned to their home countries, and have begun to develop research projects on the local fossil fauna. This has led not only to the discovery of new material in unexplored and fairly isolated areas – such as Patagonia or tropical rainforest areas – but also to the ‘rediscovery’ of material that had been forgotten in national or local museums, waiting for a palaeontologist to bring it back to life.

It is true, though, that laboratory techniques have made it possible to reveal new features of fossils that were previously impossible to evaluate – such as the internal cavities of skulls or the inner ear, using computerized tomography (CT) scans. The study of bone growth is also possible today thanks to histological studies, which analyse the structure of living tissue. Our knowledge of the locomotion and the bite of animals has also progressed, due to Finite Element Analysis (FEA) – a numerical calculation method that makes it possible, among other things, to simulate  mechanical behaviour.

Has the Covid-19 pandemic had an impact on palaeontological research in Latin America?

The global health context is a challenge for any researcher who has to carry out field and laboratory work. Many of the teams have had their field visits cancelled because international participants were unable to attend, because funding has been suspended – or because many of the institutions that financially supported their work have had to allocate their budgets  to pandemic control tasks.

In addition, museums and scientific institutions have also closed their doors, making collections that contain the fossils to be analysed, inaccessible. Likewise, palaeontological conferences have had to reformulate their systems, and have been held remotely – limiting exchanges between specialists to mere recorded presentations. Feedback and discussion that are fundamental to science have been lost. I guess, like any scientist, I long for the time when we can meet our colleagues again, and have access to our study materials.

If a research department, like the one you work in, were to draw up a “dream list” of resources and capabilities for the next five years, what would you ask for?

From my point of view, the needs of any research core are basically the same: funding, willingness, and well-trained teams. A team cannot do its work – no matter how deeply it desires to revolutionize national or regional palaeontology – if it does not have institutions that endorse and support its projects.

Likewise, often the lack of knowledge of some of the local evaluators of palaeontological research proposals means that they are not evaluated positively.  And that, in the end, means that there are some lines of research that cannot be carried out – in spite of the fact that they are extremely interesting at the global level.

Finally, in Latin America, the shortage of specialists in South American countries has slowed down the development of this field. Fortunately, these colleagues are beginning to train new scientists locally, so that in five to ten years, there could be an explosion of great international relevance. It would be critical to be able to support this human development with high-level equipment that does not exist in the region – or has not been certified at the international level, and the results of which therefore, are not accepted by part of the scientific community.

In spite of everything, palaeontology is a booming discipline in Latin America. Several sites are currently being studied, particularly in Argentina, in the Neuquén region, or in Chile, where a dinosaur footprint site is being studied in the area of Termas del Flaco, in the Chilean Andes.

Researcher at the Anthropology Department of the University of Chile, Santiago, her work focuses on the identification of phylogenetic relationships between species through the study of fossil skulls. She is also an executive member of the Chilean Association of Palaeontology.

A 98 million-year-old fossil excavated in the Neuquén River Valley in Argentina may belong to the largest dinosaur ever to walk the earth, according to a study in the journal Cretaceous Research, published in January 2021.

Researchers first started unearthing the fossilized bones of a gigantic sauropod in 2012. Though the skeleton is far from complete, experts believe it could be even bigger than the Patagotitan, the “Titan of Patagonia” – which at 122 feet long and nearly seventy tons, is the largest dinosaur known to date. This group of long-necked sauropods were found all over the world, but some of the last representatives lived in Latin America, where they evolved into giants.

Palaeontologists, who have unearthed twenty-four vertebrae and elements from its pelvis and pectoral girdle, are not certain whether the gigantic bones belong to a known species or to a  gigantic specimen of a dinosaur we already know about.

In March 2021, the National University of San Luis, Argentina, announced the discovery of Llukalkan aliocranianus, a giant carnivore that roamed present-day Argentina about 80 million years ago. Then, in April 2021, the National Museum of Natural History in Santiago, presented Arackar licanantay, a titanosaur over twenty feet long that lived 66 million years ago in Chile’s Atacama Desert.