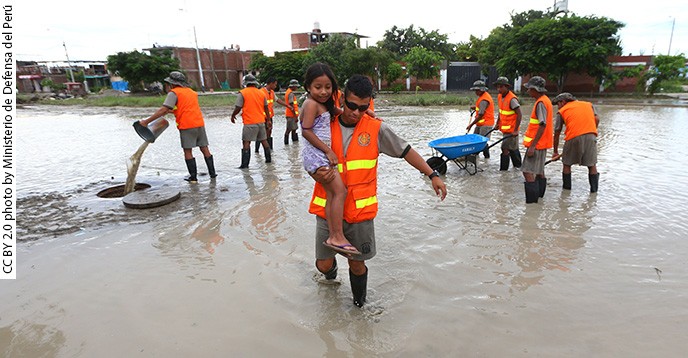 The evacuation of citizens who were affected by El Niño in the northwestern region of Piura, after torrential rains in 2017.

With more than 3,000 kilometres of coastline and ecosystems that are particularly vulnerable to the effects of climate change, Peru is one of the countries in the world where natural events and human mobility are strongly correlated.

Between 2008 and 2019, around 656,000 of Peru’s 33 million inhabitants were forced to move because of natural disasters, according to the Internal Displacement Monitoring Centre (IDMC). It is estimated that by 2100, these movements could reach unprecedented levels, as the frequency and intensity of environmental hazards are expected to skyrocket.

“The key word here is huaico”, explains Liliana Márquez, a camerawoman for a television channel in Lima. “That’s what we call the flash floods caused by torrential rains that originate from the El Niño phenomenon, almost every summer. These have now become recurrent  in a country where the first major climate-related population movement dates back to the eighteenth century, when the Zaña river overflowed and the entire city had to migrate.”

The El Niño Southern Oscillation (ENSO) is the most consequential driver of natural climate variability in Peru. Characterized by warming (El Niño) and cooling (La Niña) events of the ocean surface temperature in the Pacific, the phenomenon causes atmospheric changes that can profoundly affect the climate – particularly rainfall patterns.

Its most recent coastal occurrence, in 2017, led to nearly 300,000 people being displaced. But  beyond the El Niño phenomenon, each of Peru’s three ecosystems is exposed to specific risks that are capable of contributing to massive waves of migration.

Natural risks on the rise

While the inhabitants of the costa – the coastal region where most of the country’s population and economy are concentrated – suffer the full effects of ENSO, they are also affected by recurring droughts, periods without rain and, to a lesser extent, high and extreme temperatures, forest fires, and strong winds.

In the sierra, the highland region, most of the meteorological hazards are linked to water – although exposure to high temperatures and extreme heat in some areas, and extremely cold and freezing temperatures in places such as Cuzco, also predominate. One of the greatest dangers here is the retreat of glaciers, the acceleration of which could cause the migration of twenty-eight per cent of the inhabitants of the highlands, and also threaten one of the country’s principal fresh water sources.

Finally, the selva, with its rainforests, is experiencing an increasing number of large-scale floods. At the other extreme, there are severe droughts, riverbank collapses, erosion, deforestation, and the risks of extreme heat stress.

In a country where the poverty rate is more than twenty per cent,  and where social inequalities have increased considerably due to the pandemic, these environmental threats further accentuate the socio-economic vulnerability of the population.

According to a 2021 assessment of Peru by the Potsdam Institute for Climate Impact Research (PIK), and the International Organization for Migration (IOM), half of Peru’s national territory is exposed to recurring hazards, and one third of the population uses exposed space. More than 9 million people are exposed to heavy rains, floods, flash floods and landslides, 7 million to low and very low temperatures, and almost 3.5 million to droughts.

In the worst-case scenario of global warming of over 4 °C by 2100, the Andean country would face three major threats, which could cause tens of thousands of people to be displaced – extreme heat stress in the Amazon region, the almost total melting of glaciers in the Andes, and more intense El Niño events that would endanger coastal populations.

In Peru, migration – whether permanent or temporary, internal or external – has always existed historically. Traditionally, fewer people have migrated to the country than those who have left – to improve their job prospects, for social and educational opportunities, and increasingly, to escape environmental hazards. “These historical flows have resulted in strong migration networks across the country that pull new migration towards cities and the coast and boost remittances to rural areas,” the IOM notes.

Climate migrants tend to move mainly within their country’s borders, where dynamics depend on social demographics – age, with young people leaving more often; deprivation, with poor people more likely to migrate; and gender, with men slightly more likely to move than women.

Inhabiting a land of extreme landscapes and climates, the people of Peru have developed coping and adaptation strategies to deal with hazards where they live. In the costa, fishermen move along the coast, depending on the availability of marine resources determined by ENSO. And farmers in Piura, in the country’s north, migrate temporarily during droughts to diversify their income.

In the highlands, the effects of climate change have accelerated the historically large flows of migrants due to cold waves and freezing weather, water shortages caused by glacier retreat, and changes in rainfall patterns. In the selva region, farmers migrate mainly as a temporary and precautionary measure during the rainy season, to mitigate food insecurity.

Many migrants have no choice but to resettle in areas that are also exposed to multiple hazards – such as riverbeds, floodplains and water-stressed hills in the outskirts of cities. “Such disaster displacement can take a high psychosocial toll on people who have lost their livelihoods and assets, including homes and other infrastructure,” the IOM points out.

In this context, the role of the media in climate displacement management is increasingly important. “The victims of the 2017 huaico are still living in tents in Lima, three years later,” notes  Márquez.

“There is a growing interest in the human stories behind climate migration,” remarks Pablo Escribano, Regional Thematic Specialist in Migration, Environment and Climate Change in IOM’s Regional Office for Central America, North America and the Caribbean.

“These stories are important because they bring audiences closer to the reality of the people who are affected by climate change and forced migration,” he adds.

The increase in climate migration in Peru – as in other countries with high rates, such as Bangladesh, Fiji, Ghana, and Tanzania – is part of a worldwide trend. In April 2021, UNHCR, the UN Refugee Agency, published a report showing that, over the past decade, weather-related events triggered an average of 21.5 million new displacements each year – over twice as many as the displacements caused by conflict and violence.

According to a 2021 report by IDMC, 30.7 million people worldwide were displaced because of geophysical and weather-related disasters in 2020. Meteorological events accounted for ninety-eight per cent of disaster displacement.

In 2020, 30.7 million were displaced because of geophysical and weather-related disasters

“Our report also shows that most of the people displaced by these disasters remain in their home countries,” explains Alexandra Bilak, director of IDMC. She fears that this “will further exacerbate socio-economic inequalities.”

“The PIK-IOM report puts the evidence on the table,” notes Johan Rockström, director of PIK. “In Peru, we are seeing the impacts of how climate change and ecosystem degradation amplify the risks of human displacement and migration, already occurring now at 1.2 ℃ of global warming.”

“Given that Peru shares its ecosystems – sierra, costa, selva – with its neighbours, some realities may be shared too,” says Escribano. “What differentiates them is the response of the authorities.”

“The Latin American region has been a pioneer in the development of policies on migration, the environment and climate change, perhaps as much as the Pacific,” he adds. “In several countries in the region – like Peru, Guatemala, Belize and Chile – efforts are underway to improve the policy response to climate migration.”

Though some legal gaps remain, Peru has established several reference frameworks on climate change since 2000, and now has a wide range of legal instruments and policies applicable to climate migration.

Although most climate migrations remain internal and are therefore the responsibility of states, regional initiatives are also being developed, Escribano notes.

“In South America, the regional organization with the most advanced approach to climate migration is the South American Conference on Migration (SACM),” according to him. “It is currently working on mapping policies on migration, the environment, and climate change.”

That is an increasingly evident necessity, given the future impact of natural disasters on the continent’s population.