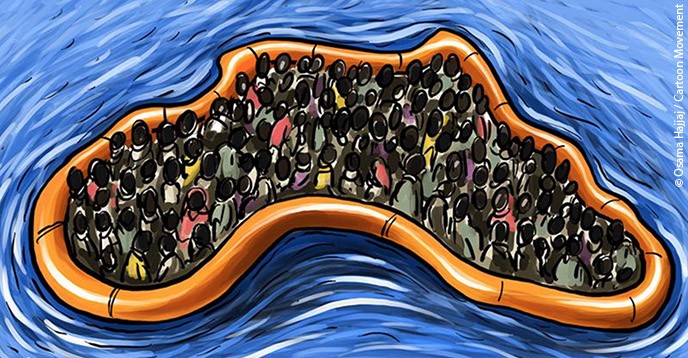 African immigration to Europe, by Jordanian cartoonist Osama Hajjaj, for Cartoon Movement, a global platform for editorial cartoons based in the Netherlands.

Why are more and more young Nigerians choosing to leave their country? Growing unemployment, the lack of opportunities, the attraction of an idealized West, and the ignorance of the dangers of illegal immigration explain this massive exodus.

Nigerian youth constitute one of the largest populations among migrants travelling from countries of the Global South to Europe. Why are these young people deciding to leave their country? Are they aware of the dangers they may encounter en route? These questions formed the basis for my study, Irregular Migration as Survival Strategy: Narratives from Youth in Urban Nigeria, published in 2019.

Carried out in four major Nigerian cities – Lagos, Ibadan, Ile-Ife, and Benin City – chosen for their characteristics in relation to irregular migration, the study focused on 15- to 35-year-olds.  All those interviewed were susceptible to irregular migration – they were either unemployed, in their final year of tertiary education, or engaged in the compulsory National Youth Service Corps.

The young people who fell into one or more of these categories expressed fear of the future, and viewed migration as a survival strategy to escape an existence of poverty and powerlessness. The study also included youth who had left the country and then returned – either voluntarily, or because they had been deported.

The first lesson learned was that most of these youth were unfamiliar with formal, legal immigration processes. More than half of them did not own valid passports, a minimum requirement for safe and legal international migration. They knew, however, that it was possible to migrate illegally, or, as they say in Nigeria, “travelling to Europe by road”. Most of them knew someone who had left the country illegally, using forged travel documents, or the services of human traffickers or smugglers.

The consensus was that “the end justifies the means”. Most of the youth did not consider irregular migration a crime, but a practical solution that was “diplomatic” or “smart.” Their strong motivation to migrate meant they failed to see the risks of an illegal journey, making them easy prey for human trafficking cartels.

Most of the youth did not consider irregular migration a crime, but a practical solution that was ‘smart’

An idealized vision of life abroad

An “imagined West” – an idealized view of life in western countries – is often at the heart of the immigration plan. Respondents generally believed that those who had successfully migrated enjoyed a better quality of life. “Those who migrate outside the country often live far better than we do in Nigeria. They have constant power supply, better weather, eat a good diet, and are relatively safe,” said Saturday*, a 29-year-old unemployed woman.

Their attitudes were also influenced by radio, television, music, and other popular culture and media portrayals of destination countries. “Been to”, the popular term for people who have visited foreign continents, especially Europe and America, conferred a level of social status. A returnee migrant at a social gathering was seen to add glamour and prestige.

Information about destination countries – which was often exaggerated or inaccurate – came from informal sources like friends, relatives, and social media.

Nigeria’s economy and high levels of youth unemployment push people to seek better  opportunities, jobs and security. In 2020, the country’s National Bureau of Statistics reported that 53.4 per cent of young people were unemployed. According to 2021 data from the World Poverty Clock, an estimated 86 million Nigerians, or forty-one per cent of the population, live in extreme poverty.

These economic realities, coupled with other variables such as political instability, rising waves of conflict – and now, the effects of the Covid-19 pandemic – have led to an increasing number of youth in certain categories leaving Nigeria for other countries perceived to hold greater promise.

Most respondents who left Nigeria illegally said they were completely unaware of what lay ahead. Many of those who came back recounted horrendous stories of their attempts to reach Europe. Jessica, a 30-year-old woman who had returned from Italy, reported that six of the girls she had travelled with, died at sea. A hundred and sixty girls were transported in three ships. Two of the ships developed mechanical faults in the middle of the sea, and six girls died before the ships could be rescued. The surviving girls were eventually picked up by prospective patrons or employers, illicit or otherwise, when the ship finally berthed in Madrid, Spain.

The growth and development of any nation largely depends on its human capital development, often encapsulated in training and education. The public education system in Nigeria is fraught with regular episodes of industrial action by academic and allied workers. This contributes to a loss of confidence in these institutions, and disruption in education. As a result, young people seek opportunities to study outside Nigeria.

This often leads to a form of step migration, where most students would rather remain in destination countries, to seek greener pastures at the end of their studies, than return home. Jessica was lured by traffickers who promised her the better prospect of an uninterrupted education abroad. “During the first-term holidays in secondary school, a family friend told my parents that he would take me to Italy to continue my education. My parents succumbed to the idea because they felt that in Italy my education would be unhindered.” She later realized that she had been deceived, and returned home.

Understanding the reasons these young Nigerians are susceptible to migration may lead to policy solutions. Nigeria must bridge inequality, create employment, and guarantee security for its population, so that young people do not want to leave. Programmes and activities should educate youth on the dangers and pitfalls of irregular migration – demystifying both the life of an irregular migrant, and the reality of living in destination countries. Secondary school curricula should include information on the rights of migrants and international migration procedures.

Nigeria must promote and build a youth-friendly economy, where enterprising young people are given the financial and practical support they need. Each of these interventions is vital to ensure that the country retains the army of skills and the capacities embodied in its youthful population.

*All names have been changed to protect the identities of those who participated in the study.

Empowering youth in Africa through media and communication, UNESCO's campaign to provide informed, verified, and balanced coverage of migration-related issues for young people in West and Central Africa by building the capacity of media, 2019.
African brain drain: Is there an alternative? The UNESCO Courier, January-March 2018