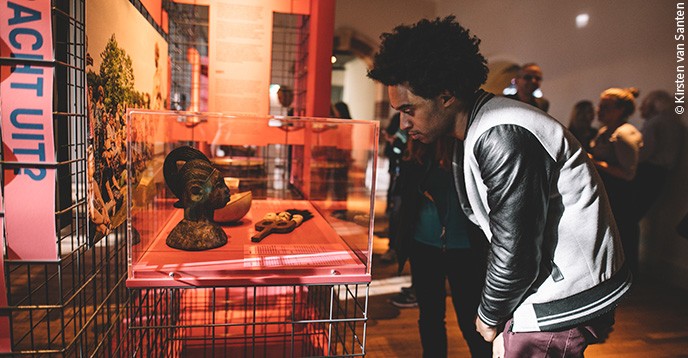 Afterlives of Slavery, an exhibition at the Tropenmuseum since 2017, traces the history of slavery and explores its current-day legacies.

The pioneering Nationaal Museum van Wereldculturen (The National Museum of World Cultures) in the Netherlands was one of the first museums in Europe to develop mechanisms for repatriating artefacts looted from former colonies.

Catherine Hickley
A freelance arts journalist based in Berlin, she is a regular contributor to The Art Newspaper and The New York Times, and the author of The Munich Art Hoard: Hitler's Dealer and His Secret Legacy.

Back in 2014, the Tropenmuseum in Amsterdam was threatened with closure when the  Ministry of Foreign Affairs said it would withdraw funding from its owner, the KIT Royal Tropical Institute.

The museum was eventually saved by creating a new entity to manage the national ethnographic collections. The National Museum of World Cultures (NMVW) was founded in 2014 by a merger of the Tropenmuseum, the Museum Volkenkunde in Leiden and the Afrika Museum in Berg en Dal. It also oversees the Wereldmuseum in Rotterdam, whose collection belongs to the city.

But during those months when a question mark hung over the Tropenmuseum’s future, some important soul-searching took place among the custodians of Dutch ethnographic collections.

“This crisis situation was a wake-up call for all these institutions,” explains Stijn Schoonderwoerd, director of  the NMVW. “It led us to question our colonial history and we saw that we had the potential to ask a lot of questions about identity, control, power, inequality and decolonization.”

Ahead of the curve

These questions are not unique to the NMVW – they have risen to the fore across Europe in recent years. In 2017, French President Emmanuel Macron promised to permanently restitute African patrimony in French museums in a speech in Ouagadougou, Burkina Faso. He commissioned a report by the Senegalese scholar Felwine Sarr and the French art historian Bénédicte Savoy – which was published in 2018, and recommended the return of sub-Saharan African artefacts in French museums. In June 2020, a bill allowing the restitution of twenty-six looted artefacts to Benin and a historic sword to Senegal was the first legislative step towards fulfilling this commitment.

In Germany, the culture ministers of the sixteen states agreed on their own set of guidelines in March 2019. They promised to create the conditions for the repatriation of artefacts in public collections that were taken “in ways that are legally or morally unjustifiable today” from former colonies. In the United Kingdom, the Institute of Art and Law is drawing up guidance for museums commissioned by Arts Council England, with publication planned for autumn 2020.

But the NMVW was a little ahead of the curve. A 2016 doctoral work by researcher Jos van Beurden, published in English as Treasures in Trusted Hands: Negotiating the Future of Colonial Cultural Objects, added impetus to the Dutch debate over colonial-era artefacts. “It had quite a lot of impact,” says Henrietta Lidchi, chief curator at the NMVW.

The museum began work on its guidance for repatriation in 2017. While repatriations have occurred over the decades, claims have previously been handled on an ad hoc basis. “We are shifting from case-by-case scenarios to make it more systematic and equitable,” Lidchi elaborates. “There is a need for structural change to make this happen.”

The guidelines were adopted on 7 March 2019, and published in a document called Return of Cultural Objects: Principles and Process. The paper was designed to express “the overall mission of the museum to address the long, complex and entangled histories that have resulted in the collections the museum holds.” It includes a “commitment to transparently address and evaluate claims for the return of cultural objects according to standards of respect, cooperation and timeliness.”

No protests from citizens

The guidelines encompass more than stolen heritage – they include a commitment to return artefacts that are of great value to source communities, regardless of how they were obtained. Claimants are also not obliged to prove that they have a suitable museum to house returned objects – a factor often cited in the broader discussion as a reason against repatriation.

The public response to the museum’s new policies has been positive. “To my relief, when we presented our position, there was not much opposition and no outcry from political groups or citizens saying we should keep everything,” Schoonderwoerd says.

The advent of a national policy could change that. The museum director doesn’t rule out the risk that far-right groups could rally opposition to the repatriation of artefacts from Dutch museums to stoke nationalist sentiment.

On the trail of colonial-era objects

The museum oversees about 450,000 items in total. Lidchi says the NMVW’s “broad estimate” is that about forty per cent of the collection was acquired in colonial contexts. Since 2019, for the first time, the museum has two full-time provenance researchers. It has applied for a government research grant of €4 million to finance and speed up this massive task.

In a collaboration with the Rijksmuseum in Amsterdam and the Expertise Centre for the Restitution of Cultural Goods and the Second World War at the NIOD Institute for War, Holocaust and Genocide Studies, the NMVW will focus initially on Indonesia – with projects to consolidate research into, for example, colonial-era military expeditions and trading-house networks.

The museum has not yet received any official claims via its new channels – perhaps due in part to the coronavirus pandemic. But the institution is in discussions with many different groups of potential claimants, including indigenous communities in North America. The NMVW also has a long-standing collaboration with the National Museum of Indonesia to share information and make the collection jointly accessible.

In March 2020, the Dutch culture minister returned a gold-inlaid kris or keris – a large dagger – to the Indonesian ambassador in The Hague, on the basis of research conducted by the museum. It belonged to Prince Diponegoro, a Javanese rebel leader and Indonesian hero who waged a five-year war against Dutch colonial rule from 1825 to 1830. Some of his belongings, including a saddle and a spear, were repatriated to Indonesia in the 1970s on the recommendation of a committee of Dutch and Indonesian experts. The keris could only be located much later.

The NMVW is also a member of the Benin Dialogue Group, founded in 2007, which comprises European museums with holdings of Benin artefacts looted by British troops in 1897, and Nigerian representatives.

The museums have recently received funding to create a digitized inventory of the so-called Benin bronzes [which come from the ancient kingdom of Benin, now in southern Nigeria] and have also agreed to loan collections to Benin City in Nigeria on a rotating basis – though they have so far stopped short of pledging to repatriate them permanently. “I have no doubt that there will be a repatriation of looted Benin objects from European museums to Nigeria,” Schoonderwoerd says.

Criticism of the NMVW has come primarily from those who believe the restitution process is moving too slowly. In June 2020, a group of activists hit the façade of the Tropenmuseum with white paintballs to protest human remains in its collection – while saying in a statement that they recognize the museum’s commitment to addressing its colonial past.

But Schoonderwoerd points out that the museum’s management is merely the custodian of the national collection. Any repatriation must be signed off by the Culture ministry, and usually entails lengthy diplomatic negotiations.

“As heritage organizations, we have become a part of political processes which we don’t control,” he points out. “Sometimes we are accused of hiding behind the state. But we cannot just give things back of our own accord. Restitution is not an act of heritage, it is a political act.”

Restitution of art: Some examples

The return of the Aksum Obelisk, The UNESCO Courier, July 2008

Homecoming for the totem poles, The UNESCO Courier, April 2001