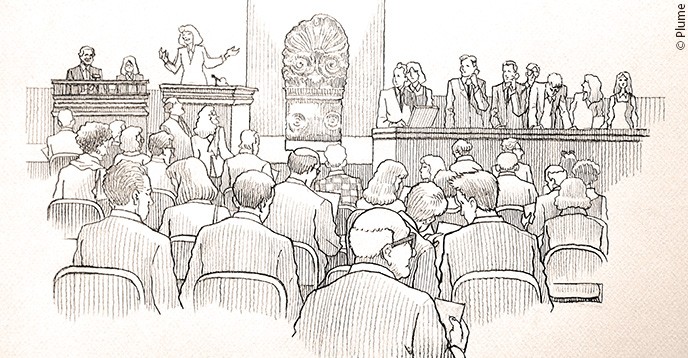 This is the story of a Greek funerary stele from the fourth century BC, put up for sale by an international auction house in 2017. The piece was not withdrawn from the auction catalogue even after the warnings of an expert regarding its dubious provenance, backed by solid evidence. It would take over a year and numerous initiatives before the stele was finally returned to the Greek authorities.

Christos Tsirogiannis
Forensic archaeologist and Associate Professor at the Aarhus Institute of Advanced Studies, University of Aarhus, Denmark. He is co-author of the 2019 book, Trafficking Culture: New Directions in Researching the Global Market in Illicit Antiquities.

In May 2017, Sotheby’s, the international auction house, put an antiquities catalogue online for their auction in London a month later. One of the lots included the upper part of a Greek marble grave stele [an upright slab], decorated with an anthemion [floral design] and a fragmentary inscription bearing the beginning of the Greek male name ΕΣΤΙ [ΑΙΟΣ].

Dating back to the mid-fourth century BC, the stele was estimated at £60,000-£90,000, and its consigner was not named. The “provenance” with which Sotheby’s accompanied this stele was: “John Hewett, Bog Farm, Kent, 1960s”. The Greek origin of the stele – the region of Attica, close to Athens, in particular – was mentioned in a catalogue note.

One important leap forward in the fight against illicit trafficking was made between 1995 and 2006, with a series of police raids on the properties of antiquities traffickers Giacomo Medici, Gianfranco Becchina, Robin Symes and Christos Michaelides.

Having participated in the last of these raids as an archaeologist, I identified the stele in several Polaroid and professional images from the photographic and documentary archive confiscated from Becchina, the notorious Italian dealer convicted for his involvement in illicit antiquities.

Thus began the lengthy process to identify, gather the evidence to reconstruct its true provenance, notify the authorities – and finally make it possible for this stolen antiquity to return home. To identify objects in the market, to contribute to their repatriation, and to open new cases against the parties involved in the trafficking, I was given official access to all three archives and others.

The Becchina file – which contained Polaroids of the stele – was dedicated to transactions between Becchina and the late Antonio Savoca, a known Greek-Italian dealer of illicit antiquities. The Savoca Polaroid images depict the stele uncleaned, still covered with soil encrustations, and with recent breaks still visible on its marble surface.

Several Polaroids show that the stele was not properly treated. In one, it is depicted  frontally in a warehouse full of other uncleaned antiquities, partly propped against a window and several metal pipes.

The Becchina archive also includes documents that shed more light on the true provenance of the stele. It was in Becchina’s hands from at least 1978 until 1990, when its ownership appears to be shared between Becchina and George Ortiz, a Swiss dealer and collector. There is no mention of Becchina, Savoca or Ortiz in the “provenance” section of Sotheby’s 2017 catalogue. Conversely, there is no proof that a “John Hewett, Bog Farm” ever owned this antiquity, especially in the “1960s” – or that Savoca was ever associated with him, for any antiquity.

After identifying the stele, I notified the International Criminal Police Organization (INTERPOL), Scotland Yard’s Art and Antiques Unit, and the Greek police art squad on 8 June 2017 – supplying them with all the relevant photographic and documentary evidence. The British police informed me that there were insufficient grounds for them to seize the item for a criminal investigation and that Sotheby's had strongly refuted the allegation. The Greek police art squad merely told me that they had forwarded the case to the Greek Ministry of Culture – which never contacted me.

During the few days before the auction, the case with all the evidence appeared on the website of the European Association of Archaeologists (Committee on the Illicit Trade in Cultural Material), posted by the archaeologist Marianne Mödlinger. It also appeared on the blogs of archaeologists David Gill (Looting Matters), and Neil Brodie (Market of Mass Destruction).

On the day of the auction (June 12), the freelance journalist Howard Swains informed me that he had attended the Sotheby’s auction and saw that the stele had apparently been “sold” to an absentee bidder for £48,000. However, when Sotheby’s announced the results, the stele was not included among the sold items.

On 6 July 2017, the online magazine, VICE, published details of the case in their Greece edition, and included a statement from Sotheby’s, dated 23 June 2017: “We chose not to withdraw the burial column from sale based on our due diligence before the sale and its known provenance that pre-dates the time it was allegedly in the possession of Becchina.  […] In this instance, the photos that Mr. Tsirogiannis [the author] has released, depict the column mounted on a stand. Thus, in combination with our provenance pre-dating the time of those photos, we do not see the photos as a basis to question the clear title of our consignor.”

Sotheby’s response ignored both the poor condition of the object as depicted in the Polaroids, and the involvement of Savoca, Becchina and Ortiz in its provenance – even after the evidence had been widely published.

Almost eleven months after the auction, the British newspaper The Times, published an article, more broadly about my research, on 7 May 2018. It also referred to the case of the stele, and added: “Sotheby’s said it had recently learnt that the provenance provided to it in 2008 was false. It said that, working with the Metropolitan Police Art and Antiquities [sic] Unit in London, ‘all relevant parties have agreed to convey the stele by way of a voluntary goodwill gesture to the Greek authorities’’’.

No more information was available regarding Sotheby’s discovery that the provenance provided was false (they still protect the final owner’s identity), or why they only found this out “recently” despite “extensive provenance research” which had made them “confident” that “there was no bar”. Of course, calling it a “voluntary goodwill gesture” also mislabels the repatriation of an antiquity that they were forced to return, after evidence demonstrated its illicit origin.

On 27 June 2018, I testified about the case at the Greek Consulate in London, following the invitation of a Greek public prosecutor to assist an ongoing legal procedure. The next day, I was informed by telephone by Scotland Yard’s Art and Antiques Unit that the stele was still in London, awaiting its repatriation to Greece. However, the Greek Ministry of Culture announced the repatriation of the stele on 8 September 2018. It is currently in the Epigraphical Museum in Athens.

This case ended well, but it demonstrates the involvement of some of the most “reputable” members of the antiquities market, and underlines the need to update laws in the so-called “market countries”. In the future, the concerned authorities must be able to act in a more co-ordinated and timely manner, so that the next stolen stele does not take as long to find its way back to its country of origin.

“We have to change the buyer’s attitude”, The UNESCO Courier, April 2001

For that stolen Vermeer, follow the art squad, The UNESCO Courier, April 2001