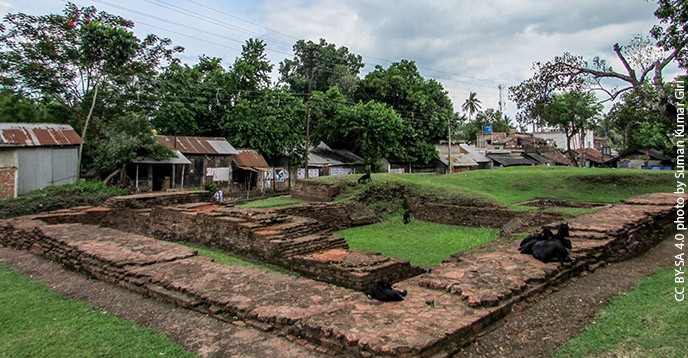 Remains of the Khana Mihirer Dhipi site, neighbouring Chandraketugarh, both part of an archaeological settlement dating back to the second century BC.

Faced with an increasing demand for its art objects in the global antiquities market, India has introduced strict laws to curb the illicit export of its archaeological and cultural heritage. However, the implementation of these laws remains a major challenge, due to the poverty that fuels looting, and the lack of adequate security to protect historical monuments.

Samayita Banerjee
A research scholar at Ashoka University, India, with an interest in archaeology, heritage and conservation, she was a recipient of the Sahapedia-UNESCO fellowship in 2018.

Tucked away near Berachampa, a small village in the North 24 Parganas district of West Bengal about thirty kilometres from Kolkata, is one of the most important early historic urban coastal sites of eastern India.

Today, there is no trace of the former grandeur of this site dating back to the second century BC. A glaring example of institutional negligence, inadequate research, and poor conservation measures, Chandraketugarh is emblematic of the problems that undermine India’s archaeological heritage today. Numerous artefacts plundered from the site have been  scattered worldwide, and are now housed in top museums and private collections.

Mechanisms to protect this rich heritage do exist, however. The Antiquities and Art Treasures Act, 1972 (amended in 1976) banned the export of any sort of archaeological objects and imposed stricter vigilance on individual ownership. All archaeological objects and sites were granted state ownership. Since then, there has also been a concentrated effort to retrieve stolen Indian antiquities.

Yet, just years after the Antiquities Act, nearly 3,000 thefts of antiquities were reported between 1977 and 1979. More than 50,000 art objects have been smuggled out of India till 1989, according to an estimate by UNESCO. But officials agree that an exact count remains impossible.

Plundering has a long history

The looting of antiquities in India has a much longer history. While today looting is considered an activity motivated by economic gain, it was once a legitimate act – carried out by colonial rulers of the subcontinent as a consequence of victory over the native population.

The establishment of the Archaeological Survey of India (ASI) – founded during British rule in 1861, and now attached to the Ministry of Culture – was an attempt to protect the cultural heritage of the nation, maintain ancient monuments, and research and monitor archaeological sites.

The ASI has taken the responsibility of protecting and preserving 3,650 monuments, from different periods ranging from prehistoric times to the colonial period. The lack of enforcement of the laws remains a major concern – largely due to inadequate staff to ensure the safeguarding of historic monuments and sites.

Most of the smuggled art is sold in the West, and a lot of pieces end up in museums. Often accompanied by false documents, the objects are shipped primarily by sea to avoid more stringent detection at airports.

Many of these sites remain at the mercy of local antiquarians and collectors who have taken up the roles of being archaeologists themselves. There are dozens of such sites in and around the Sundarbans, the world’s largest mangrove forest, in lower West Bengal. While a large number of these have been destroyed by the constant movements of the region’s complex and erratic rivers, many of them have also been excavated by the State Archaeological Department and the Eastern Circle of ASI.

But in the core areas of the Sundarbans, it is the fishermen and locals who end up finding the largest number of artefacts. These accidental discoveries then fall into the hands of antiquities dealers, or find their way to local antiquarians and museums, if they are lucky. A lack of regular public auctions, infrequent museum audits, and no legally easy alternative to determine the market value of objects by the finders, all contribute to trafficking.

It is illegal to obtain antiquities from an unverified or unlicensed dealer. But in a country like India, most of these objects are found by farmers or construction workers and they eventually hand it over to middlemen, who are part of a clandestine network. They pay a minimal amount to the finder before selling it off to the highest bidder. The strictness of the laws becomes counter-productive.

But more important than laws or regulations is the need to impart basic historical knowledge of a place to the local people – especially in schools. Because, at the end of the day, why would people protect something if they don’t know what they are protecting?

Also, finders of art objects could be educated about their economic and historical value – and the fact that they might be better compensated by government authorities. In effect, poverty remains a fundamental problem underlying the plundering of heritage.

Besides including archaeology and heritage conservation in education, it may help to involve local politicians at the panchayat and district board level, to tighten vigilance and help control local trafficking agents, who currently have unfettered access to historical sites. As for the state departments and museums, auditing and registering their collections and finds is the first thing that needs attention.

The phenomenon of the growing market for Indian and other Asian art objects is caused due to the dichotomous relationship between the rich “demand” countries and the poorer “source” countries. But the supply from the so-called poor countries can be limited with simple initiatives that need to be taken immediately. Otherwise soon there may be a situation where India’s rich ancient heritage will cease to be accessible to its own people.