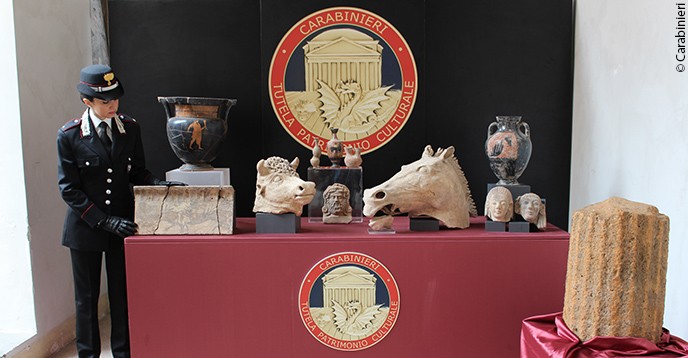 Two exceptional sculptures – a bull's head and a horse's head, dated between the fourth century BC and second century AD – presented among other archaeological items seized by the Carabinieri in Rome, Italy, 2018.

The very lucrative black market in works of art and antiques has flourished thanks to the keen interest of buyers, shortcomings in legislation, the complicity of those in the sector, an increase in looting in countries in conflict situations and the development of online sales platforms.

Marc-André Renold
Professor of art and cultural heritage law and Director of the Art-Law Centre of the University of Geneva, and UNESCO chair in the international law of the protection of cultural heritage.

A staggering $64 billion – that’s how much the international art and cultural property market generated in 2019, according to the global Art Market Report 2020. This figure reflects a craze for art and antiques that has been growing steadily in recent years.

The lucrative black market in works of art and antiquities has flourished thanks to the enthusiasm of buyers, the lack of legislation, the complicity of actors in the sector, the increase in looting in countries in conflict situations, and the development of online sales platforms.

Paradoxically, this interest also represents a threat to the integrity of cultural properties. This is because the increase in demand does not lead only to the development of a legitimate art market. It also encourages thefts from museums, private collections and religious buildings – or even the irremediable destruction of archaeological sites and the looting of ancient buildings and monuments.

In the absence of statistics, it is difficult to precisely measure the scale of the illicit market. Recent record police seizures in Europe, however, give some idea of its extent. Two recent examples: in October 2019, Operation Medicus, targeting Bulgaria, enabled Europol to seize 4,600 objects and arrest eight people. A month later, 10,000 art items were seized and twenty-three people arrested in another operation, focusing this time on Italy.

The involvement of actors in the sector – dealers, auctioneers, museum curators and individual buyers – whether or not in good faith, plays a key role in this trade in stolen goods. The complicity of those who provide false papers and certificates of provenance is an essential element in strategies to launder objects, as is the lack of specific regulations and adequate means to enforce the law.

Once they have been introduced into the legal art market by galleries and auction houses, works of art and cultural property that have been looted are difficult to identify. Objects of dubious provenance can gain visibility by being sold in galleries or exhibited in museums.

The multiplication of conflicts in recent years has further amplified this phenomenon. The Arab Spring of 2011 and the civil wars that followed, have acted as catalysts for the systematic theft of antiquities, committed by impoverished inhabitants or organized criminal groups.

The museums, archaeological sites and monuments that made up the unique cultural heritage of Syria and Iraq have been ravaged by looters in these regions. In its Resolution 2347 of March 2017, the United Nations Security Council expressed its concern and noted that the trafficking of antiques appears to be one of the sources of funding for ISIS in Iraq and in Syria. The resolution also highlights the increasing use of the internet to dispose of these goods.

The development of online sales platforms and social networks has considerably facilitated the sale of illegally removed cultural property. Technological advances, such as sonar detection and underwater robots, have also made it possible to speed up illegal excavations – including in places that are hard to reach – making it easier for looters.

Faced with this increase in illicit traffic, states have reacted by adopting regulations that are often directly inspired by UNESCO’s international conventions. But their actions have come up against several obstacles, starting with export regulations. These are often too strict, and therefore difficult to enforce. In addition, penal measures, when they do exist, are generally accompanied by penalties that are not dissuasive enough.

Another problem is that compliance with existing legislation is generally not adequately rewarded. Many artefacts are discovered by accident, as a result of farming activities or construction work. However, in the absence of compensation for the disruption of economic activity caused by the excavations, those who have discovered objects often prefer to destroy them or put them on the black market. Finally, the legal and regulatory measures put in place by states are often ineffective when it comes to controlling and regulating the activity of actors in the art market.

Without an effort by states to remedy these legal loopholes and greater mobilization of the international community, there is a risk that trafficking in cultural property will continue to flourish.