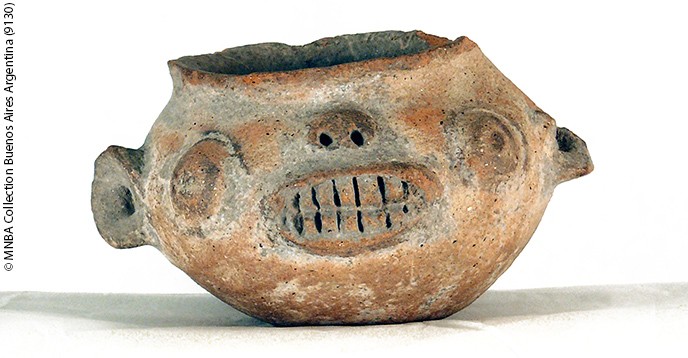 An anthropomorphic ceramic vase of Ciénaga heritage from the pre-Columbian period.

Since 2004, Argentina has returned nearly 5,000 cultural objects seized on its territory to their countries of origin. A greater recognition of the art of pre-Columbian civilizations and the adoption of a law protecting archaeological and palaeontological heritage are at the origin of this new policy.

Irene Hartmann
Journalist at the Clarín newspaper, based in Buenos Aires.

The press called it “the heist of the century”. The theft was spectacular, no doubt. In July 2002, some individuals dug a thirty-metre-long tunnel to enter the basement of the National Museum of Fine Arts in Asunción, Paraguay. Five paintings were stolen, including San Jerónimo, an anonymous sixteenth-century painting valued at $200,000. The burglars escaped and crossed the border into Argentina. Soon after, the painting was put up for sale in Posadas, in the country’s northeast. But security forces tracked it down in 2008, and Argentina returned the artwork to Paraguay that same year.

The story of the return of San Jerónimo is not an isolated case. Since 2004, Argentina has returned 4,825 pieces of stolen heritage – works of art, archaeological remains, and historical documents – seized on its soil, to their countries of origin. Over the last decade, the country has become a regional example in the restitution of stolen goods.

María Florencia Galesio, director of research at the Museo Nacional de Bellas Artes in Argentina, explains that this policy is the result of a growing awareness of the heritage value of objects from pre-Hispanic cultures. “Pre-Columbian art, whose aesthetic value has been under-estimated for a long time, has benefited from greater recognition in the last fifteen years,” she says.

The opening in 2004 of a pre-Columbian art gallery at the fine arts museum in Buenos Aires was a decisive step towards the recognition of these vestiges of past civilizations. “It is proof of the aesthetic value that we now give to the exhibits, beyond their ethnological or archaeological dimension,” Florencia Galesio adds.

“This valorization owes a lot to museological institutions, but the phenomenon did not come out of nowhere – it accompanied the adoption of the law on the protection of archaeological and palaeontological heritage in 2003,” the researcher says. It was also the year that Argentina ratified  the UNESCO 1970 Convention  to fight illicit trafficking.

The new legislation entrusts the Instituto Nacional de Antropología y Pensamiento Latinoamericano  (INAPL, the National Institute of Latin American Anthropology and Thought) with the implementation of the law at the national level, and obliges owners of objects originating from archaeological or palaeontological sites to officially register these objects.

The adoption of the 2003 law is related to the “Janeir case”, which had an impact on public opinion and helped mentalities and legislation to evolve. In the early 2000s, agents of the law enforcement agency, Policía de Seguridad Aeroportuaria (Airport Security Police), were surprised to notice a large number of archaeological objects passing through the Ezeiza International Airport in Buenos Aires. They turned to the INAPL, which trained officers to identify archaeological and palaeontological vestiges. Between 2000 and 2001, around 10,000 objects were seized from various shops in the Argentinian capital. Most of them belonged to Néstor Eduardo Janeir, an antique dealer.

It is difficult to assess the market value of goods returned by Argentina over the last fifteen years or so. “As the purchase and sale of these objects is prohibited, archaeologists are reluctant to evaluate them. For many pieces, we have no price; for others we make estimates based on the sales publications of the offenders. It could be a few hundred, thousands, or millions of dollars,” explains Marcelo El Haibe, the federal police commissioner in charge of Cultural Heritage Protection, INTERPOL-Argentine Federal Police.

In fact, just over three per cent of the almost 5,000 objects repatriated to their countries of origin have a “price” attached to them. They would be worth about $860,000 in total if these pieces had been sold on the black market. Is that not enough? But this figure far from represents the importance of these restitutions, which would require calculating the sales value of the remaining ninety-seven per cent – a number that would, in any case, not reflect the much more significant symbolic value of the objects in question.

Peru, one of the countries most affected by trafficking in the region, tops the list of states to benefit from the restitution of objects by its Argentinian neighbour – with eighty-eight per cent of stolen goods recovered. It is followed by Ecuador, which has had only nine per cent of its goods returned. In 2016, 439 objects of Ecuadorian heritage and 4,150 pieces of Peruvian heritage, seized seven years earlier, were returned to their countries of origin. Restitutions were also made to Bolivia, Paraguay, and Spain.

Maps designed by Ptolemy – the second-century Egyptian astronomer, mathematician and geographer of Greek descent – were stolen from the Biblioteca Nacional de España (the National Library of Spain) in 2007 by a man posing as a researcher. Two of the stolen maps were found in Argentina, where the thief resided. They were returned to Spain the same year.

As in the case of the Spanish maps, it is common for antiquities traffickers to use labyrinthine routes across borders and oceans. “This is why victims report these incidents in their own countries, while the stolen objects are generally sold in other countries – which does not make the work of investigators any easier,” says El Haibe, who estimates that the illegal trade is worth around  $6.5 billion a year.

To be successful, these operations often require the collaboration of police services of different countries, but also the use of outside expertise to identify objects. “We work side by side with other organizations, such as the INAPL, or the Bernardino Rivadavia Argentine Museum of Natural Sciences, if it is a question of palaeontological pieces. Our success is the result of  our  commitment to this interdisciplinary work,” El Haibe says.

The most recent successful operation was in 2019. It involved the recovery of 115 documents – written between 1824 and 1900, and valued at $10,000 – which were on sale at a shop in Buenos Aires. They will soon be returned to Peru, from where they were stolen.