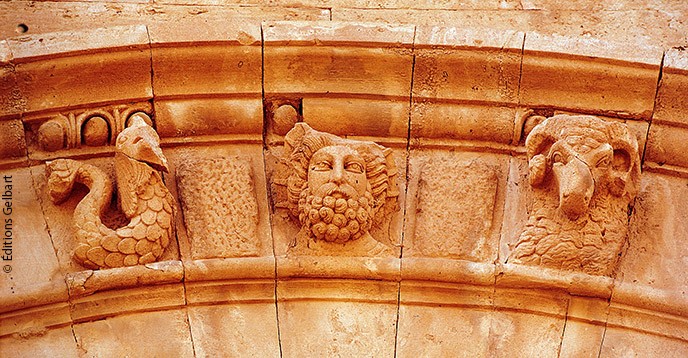 Looters, aided by stone-cutters, stole parts of a frieze from the site of the ancient city of Hatra, Iraq, in 2010.

The trafficking in antiquities from war zones in the Middle East has grown steadily over the past two decades. While there is international consensus on condemning this illicit trade, it remains difficult to combat it in practice. One way to stop it is to increase sanctions on buyers, says Amr Al-Azm, an archaeologist and professor of Middle East history and anthropology at Shawnee State University in Ohio, United States.

To what extent are museums and archaeological sites in conflict zones exposed to looting?

During an armed conflict, the state loses control over parts of its territory. Its institutions become degraded, and it is no longer able to protect its population and its land. Archaeological sites and museums are also deprived of protection, opening the way for theft or illegal excavations. In fact, most looting is carried out by locals in the area who have lost their livelihoods because of these conflicts, and turn to looting to survive. Terrorist groups are only one element of the different entities that exploit these ongoing conflicts.

The looting of cultural heritage sites is not new – it goes back a long time. In the Middle East, art trafficking networks existed long before the region was hit by decades of conflict. The looters were often in collusion with corrupt officials or the military. The looters remain the same when there are geopolitical changes – they just change masters depending on who’s in charge. If terrorist groups are at the helm in some regions, traffickers adapt to collaborate with them.

Why do armed terrorist groups attack cultural heritage? Is it only to finance their activities?

Trafficking in works of art is indeed a source of funding, just like trafficking in natural resources, or the extortion of illegal taxes from civilian populations. But this is not the only reason they are motivated.

Terrorist groups are aware of the importance of heritage. Many of the attacks on these sites are opportunistic, but some are also targeted with the specific intention to cause maximum harm. Political destabilization creates a major threat for cultural heritage.

For example, ISIS attacked and destroyed major monuments like the Temple of Bel in Palmyra, and the contents of the museum in Mosul, Iraq, as part of a concerted propaganda campaign to demonstrate their power to act with impunity – and the impotence of the local authorities and the international community to stop them.

Cultural heritage sites also become strategic locations for armed groups like ISIS. They recognize the international importance of these sites and use them for their own benefit – as bases,  training camps, or as ammunition dumps. They knew that they were less likely to be targeted by coalition air strikes when they occupied the ancient Syrian city of Palmyra in 2015, for example – and took full advantage of the fact that it was a UNESCO World Heritage site.

In 2015, in response to the growth of trafficking in the region, the United Nations Security Council Resolution 2199 – which prohibits cross-border trade in cultural property from conflict zones – was unanimously adopted. However, objects from countries at war continue to flow into the art market. Why is this happening?

In the majority of countries where the art market is legally regulated, the destruction and theft of works of art are criminally prosecuted. However, this is not the case for the possession of stolen cultural property.

Today, an auction house, museum or collector accused of possessing an object from a war zone can certainly be prosecuted. But the outcome of the case will depend on the civil jurisdiction of the buyer's country. The heaviest penalty incurred, if the institution or antique dealer is found guilty, is that they have to give the object back. You may be required to pay a fine, apologize, and return the object – that’s the worst that can happen.

Tens of thousands of looted works of art are now circulating illegally around the world. For a buyer or seller, the prospect of having to return one or two such items a year is not much of a risk to take.

Though Resolution 2199 was unanimously passed, some countries where the legal trade in antiquities is permitted have not followed up by introducing legal instruments. For things to really change, these states must be prepared to do their part to criminalize the trade. Serious  penalties must be imposed in order to be a real deterrent.

A change of attitude towards art trafficking is also needed. In 2019, for example, there was a huge outcry when Christie's put up a head of Tutankhamun for sale. Dated to about 1333 BC to 1323 BC by the international auction house, there seemed to be no doubt that the quartzite sculpture was looted from Egypt. Yet, the entire discussion in the public sphere  was whether the piece had been removed from Egypt before or after 1970 – the year that UNESCO introduced the 1970 Convention to protect cultural property. People didn’t seem to care that the sculpture was stolen, an act that is punishable under criminal law. They were more concerned about when it was stolen – which would establish whether or not it had entered the art market legally.

As long as there are no fundamental changes in our society, looted antiquities, whether from war-torn countries or elsewhere, will continue to feed the art market.

To what extent are auction houses, museums and collectors responsible for illicit trafficking?

Basically, I believe trafficking is like a bridge with two ends – there is supply and demand. On the supply end are the looters on the ground, who feed the network. On the other side are the buyers, both legitimate and illegitimate, who create the demand. We need to crack down on both sides to seriously tackle this problem. If only one side is addressed, the authorities will fail. A multitude of strategies to deal with different types of looting must be put in place by governments.

I believe one of the best ways to do this is to prosecute anyone who is proven to have knowingly looted or trafficked in antiquities from a conflict zone under terrorism laws – not just under civil suits which allow perpetrators to get away with crimes with just a slap on the wrist.

Can parallels be drawn between antiquities trafficking and the arms and drug trafficking that are also rampant in the Middle East?

Trafficking in art and antiquities usually starts with clandestine excavations. The loot is taken out of the site, sold, and taken across borders to art markets, where it is sold again, and ends up in an art gallery or private collection. This whole process requires extensive networks, which are often vast and well-established. It is well-known that these networks – dealing in weapons, drugs, antiquities, and even humans – are all connected.

The looting in war zones continues unabated –  there is no significant shift. I prefer the term   “conflicted antiquities” to refer to this illicit trade, rather than “blood antiquities”, which was coined to describe the illegal diamond trade. The trafficking in antiquities and arms usually go hand in hand. It is not uncommon for law enforcement authorities to find arms and antiques stored in the same place during crackdowns.

Will we ever see the end of the illicit antiquities trade?

It is very unlikely, because the lure of finding buried hidden treasure is just too great. However, many states are taking action at the national level. In the Middle East, for example, trade in antiquities is now banned in the vast majority of countries. Therefore, if an item from Libya, Syria, Turkey or Lebanon shows up on the art market, we can be sure that it was looted.

At the international level, organizations assist national law enforcement agencies in dismantling trafficking. UNESCO, for example, maintains a List of National Cultural Heritage Laws. The International Council of Museums (ICOM) has a Red Lists Database, which serves to illustrate the categories of cultural goods most vulnerable to illicit traffic. And  Interpol has a Stolen Works of Art Database which is regularly updated.

But efforts must be made at the local level. Communities are too often sidelined by large international institutions that tend to work directly at the governmental level in the fight against illicit trafficking.

Especially while conflicts are raging, and when government institutions are not in control, it is the local communities, the local stakeholders and the local NGOs that are on the front line.

In January 2018, the Ma'arrat al-Numan Museum in Syria, was hit by two missiles during an airstrike, causing extensive damage to the north-west corner of the building. With the help of the local community, the museum director, and a team of experts including myself, we were able to visit the site to assess the damage. We sent the assessment to UNESCO, which provided financial assistance and structural expertise to help stabilize the building and prevent it from collapsing. This successful collaboration saved the museum and prevented the catastrophic loss of one of the most important collections of Roman and Byzantine mosaics in Syria.

We need to find new ways to address the new challenges and situations we face today. The collaboration of different stakeholders and actors at the international, national and local levels is imperative, if we want to put an end to trafficking which has gone on for thousands of years.