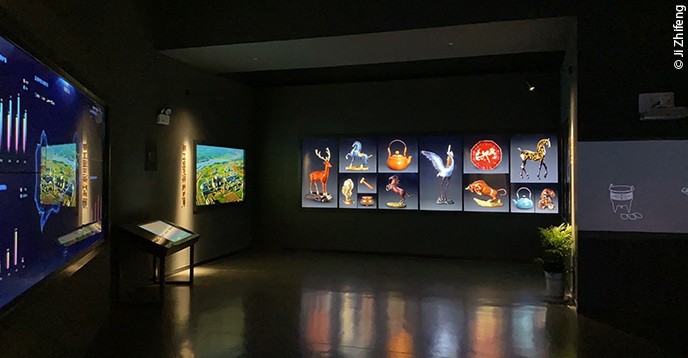 A virtual exhibition hall at the Digital Museum of Copper and Bronzes in Tongling, China.

A new kind of museum in Tongling, China, virtually displays ancient copper and bronze objects from the Han dynasty, many of which have found their way to museums abroad. It foretells the future of digital museums – institutions capable of sharing their resources and offering unprecedented access to their collections to global audiences.

Tang Jigen
Chair Professor at the Southern University of Science and Technology (SUSTech) in Shenzhen, with an expertise in Chinese Bronze Age archaeology.

In the city of Tongling in the Anhui province of eastern China, the question of how to enjoy these objects that have remained overseas has been resolved by establishing a digital museum. A city of only 1.6 million, Tongling is famous for the production of copper – copper mining and bronze casting were established there in the late seventeenth century BC. During the Han Dynasty (202 BC–220 AD), this river port along the Yangtze river supplied most of the raw material for the casting of copper coins.

In 2016, the city’s local government, with the help of experts, decided to construct a museum dedicated to copper and bronze. The goal of the Digital Museum of Copper and Bronzes (DMCB) is to share globally, the cultural resources of ancient Chinese copper and bronze objects online – especially those that remain abroad.

Some of the treasures that visitors to the DMCB website (expected to go online by end 2020) will have access to, are: 100 Highlights of Chinese Bronze Objects, an online exhibition of a hundred bronzes selected by archaeologists through a voting process. It  includes some Chinese bronzes from museum collections overseas. Another exhibition, 100 stories about Bronze Objects, recounts details of how these bronzes left China and still remain abroad.

One of these stories tells of how the Xiao Chen Yu zun – a 3,000-year old ritual bronze vessel shaped like a  rhinoceros, from the Shang Dynasty (1600-1046 BC) – made its way to Paris through C. T. Loo, an art dealer, and was bought by Avery Brundage, an American sports administrator and former president of the International Olympic Committee (IOC). This Bronze Age Chinese ritual vessel, unique because it was made in the shape of an animal, was finally donated to the Asian Art Museum of San Francisco – where it remains one of the museum’s most visited pieces, and even serves as its mascot.

The idea of sharing cultural resources online is not new. Many museums which are part of  the International Council of Museums (ICOM) network have their own websites. What makes the DMCB unique is that it integrates and shows cultural resources spread across different countries. China has experienced great losses of its cultural heritage over centuries. Millions of cultural objects are estimated to have left the country through different means.

A survey conducted by this author in 2016 concluded that over ninety per cent of respondents hoped that the cultural objects which had left China would one day be returned to their country of origin. The fact that these cultural objects can now be shared online through the DMCB, may serve to relieve the long-lasting tension between China  and the countries that currently house them.

Though the DMCB is an innovative idea, it is limited to sharing only a specific type of object online – Chinese bronzes. In future, digital museums will be built and run by several museums collaborating across different countries, integrating a wealth of resources to exhibit a wide range of art objects. These new digital museums could be called “digital museum networks” or “cloud museums”.

The cloud museums are neither simply websites that display a specific museum’s collections, nor the combination of the websites of different museums. Instead, they are the result of collaborations of various museums across the world. These futuristic digital museums already exist – the online exhibition by the Museum of Archaeology and Anthropology at the University of Cambridge and the British Museum, both in the United Kingdom, is one such example.

The rapid and dramatic strides in big data storage and transfer technologies will facilitate the birth of cloud museums. Some scholars have predicted that the advent of these museums could change the current state of these institutions, and even culture in general.

The digital museums of the future will be able to select different types of objects on a range of themes, to design exhibitions on an unprecedented scale by sharing huge amounts of data. They may also be able to interpret and display an object in a variety of ways, drawing on cultural resources from across the globe. Scholars from different countries would be able to engage in a conversation with each other, and with the public, about the objects on display.

Three thousand years ago, during the Shang Dynasty – the earliest archaeologically recorded dynasty in Chinese history – bronze craftsmen created at least two known bronze you objects, depicting a tiger eating a human. Because of historical reasons, these two objects are now in the collections of the Musée Guimet in Paris and the Sen-Oku Hakukokan Museum in Kyoto, Japan. If these two museums and the Chinese archaeologists specializing in the Shang period all featured on a cloud museum one day to share their knowledge and stories about these you objects with a worldwide audience, how wonderful it would be.