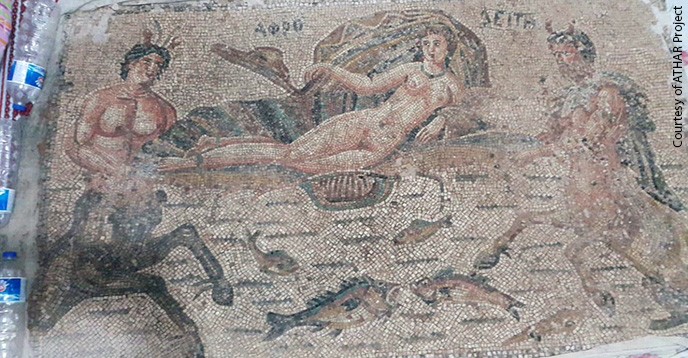 An ancient mosaic, illegally obtained from Syria, offered for sale on Facebook.

Auction sites and social networks have, in the last few years, become hubs for the illicit trafficking of cultural goods. Though Facebook recently banned the trade in antiquities on its platform, much remains to be done to curb this relatively recent marketplace, which offers traffickers a global showcase.

Tom Mashberg
A writer, editor and journalist focusing on art and antiquities theft and repatriation, he is a regular contributor to The New York Times Culture section. Based in Los Angeles, Mashberg is also the co-author of Stealing Rembrandts: The Untold Stories of Notorious Art Heists.

In June 2020, after more than two years of formal complaints from antiquities trackers, Facebook finally acknowledged that its site was being used as a vast online bazaar for the sale of looted Middle Eastern artefacts.

The social media conglomerate announced a major policy change, saying “to keep these artifacts and our users safe, we now prohibit the exchange, sale or purchase of all historical artifacts on Facebook and Instagram.”

It was high time. According to the Antiquities Trafficking and Heritage Anthropology Research Project, ATHAR (the Arabic word for antiquities) – a watchdog group whose experts brought the scandal to Facebook’s attention as far back as 2014 – online platforms have done little to prevent  the illicit trade of relics or other objects.

The COVID-19 crisis has compounded the problem by driving more and more dealers and buyers online – where they are discovering that by joining certain unmonitored Facebook groups, they can enter the illegal market with ease.

Facebook is hardly the only online outlet where illegal antiquities are being traded. A wide variety of auction sites – notably eBay, Invaluable, Catawiki and GoAntiques – are also being used to locate buyers, largely in Europe and the United States. Theoretically, the policies for the use of these sites prohibit these sales.

For example, eBay’s policy claims: “Listings for antiquities must include the provenance or ownership history of the item and, where possible, a photo or scanned image of an official document including both the item’s country of origin, and the legal details of the sale. The item must also be approved for import or export.”

But in practical terms, blocking sales that violate those rules is virtually impossible.

“Due to the large numbers of objects sold online and the speed of the transactions, regular monitoring and research of the online market is impossible for many national law enforcement agencies,” explains Neil Brodie, a Senior Research Fellow at the University of Oxford, who specializes in endangered archaeology, and has written extensively about the online trade.

The number of illegal items auctioned online would be difficult to estimate. In a 2019 report for the European Commission on the illicit trade in Europe, Brodie estimated that in the United Kingdom in 2018, some 52,560 antiquities lots were likely sold, realizing €1.8 million. Many of these transactions are illegal, he adds.

At a web conference on June 26, 2020, aimed at taking new measures to thwart such sales, Ernesto Ottone Ramírez, UNESCO’s Assistant Director-General for Culture, said, “We must double our efforts in the fight against this global scourge.” Facebook, eBay and other sites have also faced questions over their role as platforms for illicit sales.

Antiquities trafficking began on Facebook at about the time of the Arab Spring in 2011, experts say. According to Amr Al-Azm, a professor of Middle East history and anthropology at Shawnee State University in Ohio and co-director of the ATHAR Project, it was around this time that  ISIS began professionalizing the plunder of archaeological sites in Iraq and Syria, using Facebook as a vital tool.

“Social media lowered the barriers to entry to the marketplace,” he said. In September 2020, Al-Azm and Katie A. Paul, archaeologist, anthropologist and co-director of ATHAR, estimated that there were at least 120 Facebook groups – most of them in Arabic – connected to the illegal trade in Middle Eastern antiquities. They have hundreds of thousands of members in total.

“It’s an issue of scale,” she added. “eBay has roughly 182 million users, whereas Facebook has over 2 billion, and is accessible in all developing countries.”

Typically, Al-Azm explained, those seeking to buy or sell artefacts initiate inquiries in a Facebook group, and complete negotiations by switching to encrypted apps. Buyers also widely circulate requests for desired objects, he added, creating a predicament that Al-Azm calls “loot to order.”

“They literally will post pictures from auction catalogues and say, ‘See, this is how much this stuff can sell for, so go for it guys,’” Paul pointed out. Online traffickers will also try to reassure illicit buyers that they are getting genuine items by posting photos or videos showing the objects being unearthed in situ, she added. Some go as far as to post detailed instructions for aspiring looters on how to locate vulnerable archaeological sites and properly dig up potential treasures.

ATHAR has noticed another trend – live real-time bidding for artefacts as looters pull them from the ground, to further demonstrate their authenticity. When a purchaser wins an item, they are shown how it can be falsely labelled and routed via countries of transit.

In the event that Facebook or an auction site does ban a seller, Al-Azm and others have asked them not to delete the pages – because they constitute crucial evidence for law enforcement and heritage experts. But citing data privacy concerns, the online platforms say they do not intend to preserve any removed content.

The wave of antiquities hitting the online market will likely continue. Some traffickers sit on looted antiquities for years, waiting for attention to die down – or forging documents about the items before offering them for sale.

In this context, photos and videos of the stolen objects are documents of prime importance. “They are digital evidence that will be of great value to scholars and potentially critical to future repatriation efforts,” Al-Azm concluded.

Curbing the spoils of war, The UNESCO Courier, October-December 2017