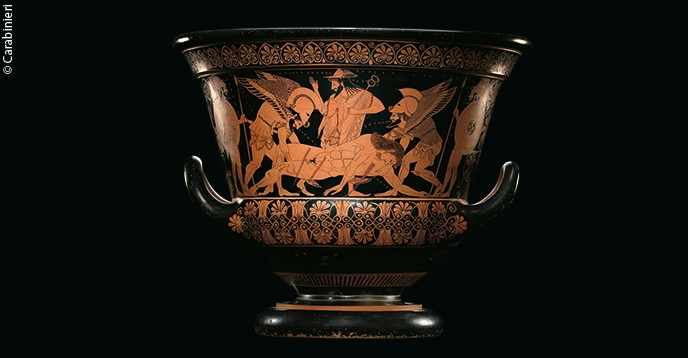 Greek Euphronios crater, circa 515 BC. Illegally excavated in Italy in 1971, and bought by the Metropolitan Museum of Art, New York, in 1972, it was restituted to Italy in 2008.

In spring 2020,  the health crisis linked to the COVID-19 pandemic brought the whole world to a standstill. But the illicit trafficking of cultural property has not stopped. On the contrary. Traffickers of cultural goods have taken advantage of reduced security at archaeological sites and museums to engage in illegal excavations and thefts, with impunity.

The figures prove it: the attraction for mosaics, funerary urns, sculptures, statuettes, or ancient manuscripts has never been greater. The pressure of this demand has helped fuel the illegal market in artworks and antiquities, which now operates largely online – via platforms that often pay scant attention to the original provenance of the objects.

Criminal and terrorist organizations have rushed to take advantage of this breach, using the illicit trade to finance their activities or launder their revenues. Since 2014, ISIS has organized a massive and methodical looting of archaeological sites and museums in the parts of Syria and Iraq under its control.

The illicit flow of cultural goods is now believed to be the third-largest in terms of volume, after drugs and arms. A cultural issue, this shady business that thrives in conflict-ridden areas, has also become a threat to international peace and security.

The 1970 UNESCO Convention on the Means of Prohibiting and Preventing the Illicit Import, Export and Transfer of Ownership of Cultural Property, which celebrates its fiftieth anniversary this year, is more crucial than ever in this fight.

In half a century, much has been achieved to develop preventive laws, train professionals, strengthen international co-operation, and encourage the return of stolen or illegally exported works. An increased awareness of the cultural, moral and material damage caused by this illicit traffic, now recognized as a war crime by the United Nations, is proof of this. The decision taken by UNESCO Member States to celebrate the International Day against Illicit Traffic in Cultural Property on 14 November every year also demonstrates this.

However, the difficulty of curbing online trafficking, the weak penalties for perpetrators, and the vulnerability of the areas affected, necessitate a new level of international mobilization today.