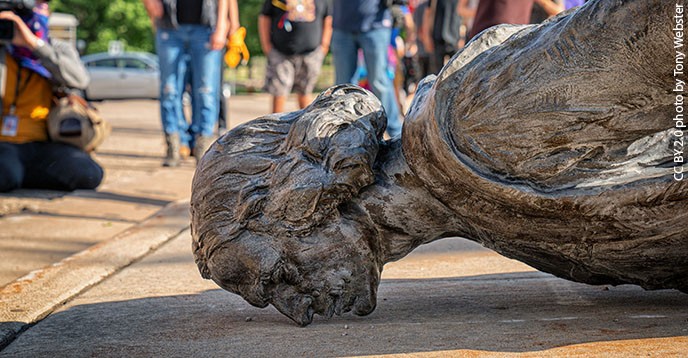 A group of protestors in Minnesota pulled down a statue of Italian explorer Christopher Columbus, June 2020. It was one of several statues associated with slavery and colonization that were toppled during nationwide demonstrations in the United States.

The police brutality that came into focus in the United States in spring 2020 sparked a wave of protests that extended far beyond the country’s borders. Racism, whether systemic or “ordinary”, remains deeply rooted in the minds and workings of contemporary societies, the author argues.

Véronique Tadjo
A writer, academic, and artist who was born in Paris and grew up in her native Côte d’Ivoire, Tadjo is the author of several books, including Far from My Father, her most recent novel. She now divides her time between London and Abidjan.

Images of George Floyd, a handcuffed man who was suffocated and killed by a policeman in Minneapolis on 25 May 2020 – posted on the internet and then picked up by the international media – sparked worldwide protests and brought the issue of racism back into the spotlight.

For a while, we may have nurtured the illusion that we are living in a post-racial era. The elections of Nelson Mandela as the first black president of South Africa in 1994 (to 1999) and of Barack Obama, the first black head of state of the United States in 2008 (who served as President from 2009 to 2017) were key moments that contributed to this feeling. A similar optimism prevailed in France, where republican values seemed to have overcome the notion of race, which was condemned to obsolescence.

Yet “ordinary” racism has never ceased to permeate our daily lives, feeding on prejudices and preconceptions. Sometimes subtle, often head-on, it rests on three pillars, according to French  genetic anthropologist and ethnobiologist Évelyne Heyer and historian Carole Reynaud-Paligot, who worked on an exhibition (2017-2018) at the Musée de l’homme (Museum of Mankind) in Paris. These are: “categorizing individuals into groups (which is a reflex of the human brain, but the criteria for classification vary according to socio-historical contexts); hierarchizing them (some are valued or devalued for arbitrary reasons); and essentializing them – or presenting these differences as being insurmountable or inevitable, because they are hereditary.”

Rejection of the Other

This rejection of the Other takes many forms. It  does not spare celebrities – manifesting itself, for instance, in the jeering of a black football player or the unleashing of social media networks against black politicians. More often than not, however, it is ordinary citizens who are the victims – as they struggle to find housing or employment because of their racial origin. This discriminatory attitude is usually disowned by the general public. Recognized as being detrimental to social cohesion, it is rightly or wrongly attributed to reactionary thinking.

According to the psychiatrist and philosopher Frantz Fanon, a leading advocate of decolonization, “Racism is not the whole but the most visible, the most day-to-day and, not to mince matters, the crudest element of a given structure.”

It is this given structure that we call “systemic racism”. More pernicious and therefore more difficult to expose, it is concealed even in the workings of the state. For those who have never been confronted with these forms of racism, it is easy to deny that they even exist. Aren’t there laws that censure different forms of discrimination? In France, the first national law against racism, which dates back to 1 July 1972, has been amended and improved many times. In addition, there are several European and international conventions that can be used to condemn abuses. But laws alone are not enough to curb everyday discrimination. More needs to be done.

The extent of systemic racism cannot be understood by reducing it to isolated acts. It is about  the inferiorization of certain minority groups, who are historically considered subordinate – because of the legacy of slavery and/or colonization. In a so-called democratic society, it infiltrates the law enforcement system (racial profiling and police violence), the prison system (higher numbers of prisoners and heavier sentences), the education system (failure at school), the health system (limited access to health care), the world of work (higher unemployment rates) and social mobility (working-class housing estates and neighbourhoods) – the list is not exhaustive.

According to historian Laure Murat, Director of the Center for European and Russian Studies at the University of California, Los Angeles (UCLA), systemic racism is “an institutional monopoly that most often perpetuates a culture – [that is] sexist, racist, violent”.

The demonstrations that have taken place around the world in support of America’s Black Lives Matter (BLM) movement are the expression of an awareness of the multifaceted nature of racism – which paves the way for different forms of abuse (such as anti-Semitism, Islamophobia, homophobia, sexism, transphobia, etc.). The context of the COVID-19 pandemic – marked by its collective experience of confinement, suffering, and death – has undoubtedly accentuated public sensitivity to this tragedy.

Black Lives Matter is part of the history of the struggle of black Americans for racial equality – from the beginnings of slavery on the plantations of America’s southern states in the seventeenth century, to the fight for civil rights in the 1960s – which ended segregation in public places, transport and the education system.

This movement draws its strength from past struggles and victories, even if they did not lead to the eradication of racism from American society. But it is striking to note that it did succeed in mobilizing the masses around the idea of an internationalization of social injustice. Whether in France, the United Kingdom, Germany, Australia or South Africa, the denunciations of police brutality and other forms of exclusion have multiplied – and led to a collective rejection of oppression, humiliation and domination.

However, some resistance to change is to be expected. After the anti-racist signs and slogans, major commercial brands using more inclusive advertising, and bookshops rushing to promote works by black authors and books on racism, a turnaround is possible.

Confronted with the material damage during many of these demonstrations and the fear of public disorder, support for anti-racism could wane – and give way to clashes between hostile groups, any challenge to the status quo, or to violent clashes with law enforcement.

In this context, the toppling of monuments to racism has already proved contentious. The fact that BLM has no real centre is also a stumbling block. The movement seems to have split and is struggling to control the extremism of a minority of very active militants.

In order to change society, the momentum of solidarity must go beyond protests and symbols.  “But if there were no “divisions” and if everyone was always in full agreement on everything,  we wouldn’t need democracy,” Jan-Werner Müller, professor of politics at Princeton University reminds us in an op-ed in the French daily Libération, on 30 June 2020.  “Democracy is a matter of regulating conflicts (by constitutions and, in particular, by fundamental rights). In a democracy, unanimity is not a value in itself.”

Fighting racism is not about helping black people, but of achieving a society where differences are respected, and there are equal opportunities for all.

The UNESCO Courier against Racism: A selection of issues and articles from the magazine on the subject.

The International Coalition of Inclusive and Sustainable Cities (ICCAR)