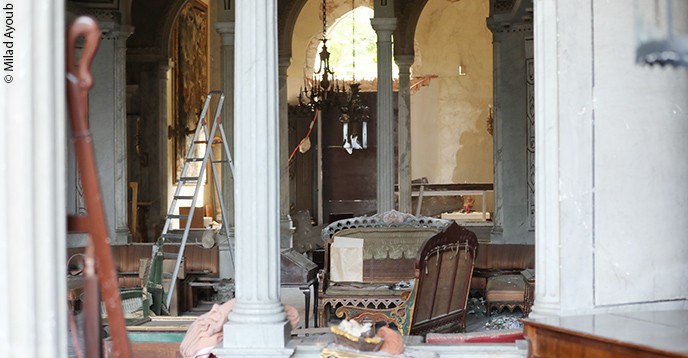 The 160-year-old Sursock Palace and the Sursock Museum opposite it, both have rich art collections. The buildings have been severely damaged by the explosions.

Already reeling from the economic crisis and the global pandemic, Beirut was rocked by two deadly explosions on 4 August 2020. The blasts claimed nearly 200 lives, left thousands wounded, and ravaged a large area at the heart of the Lebanese capital.

To help the city recover, UNESCO launched Li Beirut (For Beirut, in Arabic) on 27 August 2020 an international fundraising appeal to support the rehabilitation of schools, historic heritage buildings, museums and galleries.

A preliminary assessment of the damage found that at least 8,000 buildings have been affected. These include 640 historic buildings, around sixty of which are at risk of collapse. The Sursock Museum, the Archaeology Museum of the American University of Beirut, and the historic neighbourhoods of Gemmayzeh and Mar Mikhaël have been severely damaged. The Marfa’ contemporary art gallery and Galerie Tanit are completely destroyed. In addition, cultural institutions are facing substantial losses in revenues. According to initial estimates, $500 million will be needed to support heritage and the creative economy in the coming year.

On the education front, 163 public and private schools in and around Beirut were damaged by the blasts – which could deprive more than 85,000 students of their right to education. Five technical and vocational compounds which include twenty TVET (Technical and Vocational Education and Training) schools and institutes, have also been damaged.

UNESCO, which co-ordinates the United Nations action for education in Beirut, is leading the efforts of partners and donors to rehabilitate schools, and to ensure that learning never stops. The Organization has committed that forty of the 163 schools affected will be immediately rebuilt with funds it has already raised. An estimated $23 million will be required to support education. 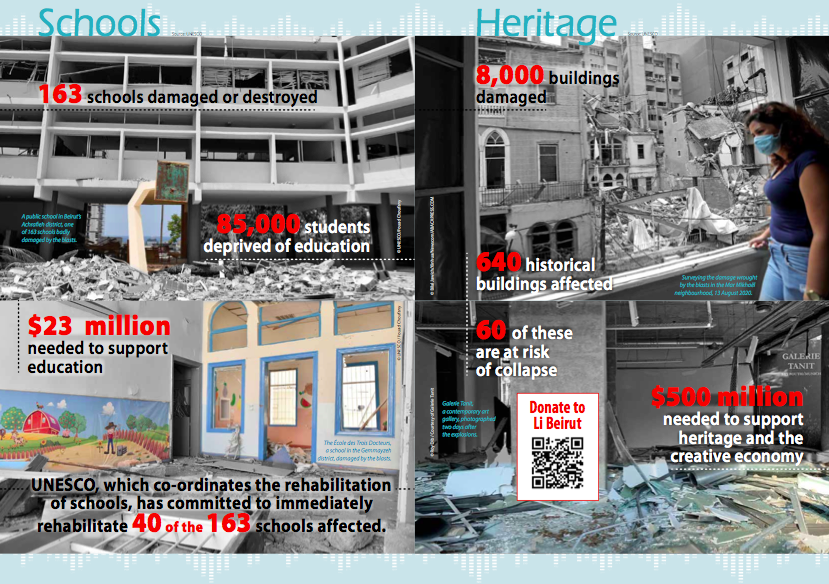 Donate to Li Beirut
More on the UNESCO's work for Beirut