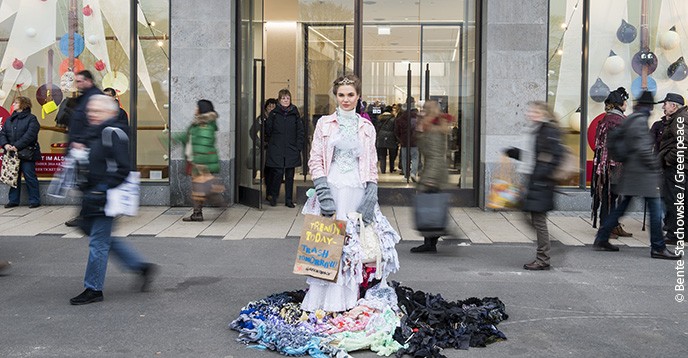 An activist disguised as a Trash Queen promotes “Buy Nothing Day” on Black Friday in Hamburg, Germany, 2016, as part of a Greenpeace campaign to reduce overconsumption.

Driven by the awareness of a growing number of consumers, the fashion industry is trying, with varying degrees of sincerity, to be more virtuous and more sustainable. But in spite of initiatives to improve recycling, promote exchanges, and the range of rental options on offer, progress to make this highly polluting sector go green remains modest.

Fashion journalist and lecturer based in London, with a special interest in sustainability.

Go into almost any high-street clothing store today and you’ll find items proudly labelled “organic”, “vegan” and “recycled”. This would have been a rare sight even five years ago. But behind the declared desire to make fashion sustainable and more eco-responsible, the  actions taken to make this happen remain limited in scope.

The figures speak for themselves. A 2020 report by Global Fashion Agenda, an industry forum on sustainability, and McKinsey, the management consulting firm, found that if the industry continues with its existing decarbonization initiatives, emissions will be capped at 2.1 billion tons a year by 2030. That’s the same level the report estimates the industry emitted in 2018, accounting for four per cent of the world’s total emissions.

Some countries are beginning to take initiatives to reduce the environmental impact of the industry, with relative success. For example, in the United Kingdom, Europe's largest consumer of fashion, the Sustainable Clothing Action Plan was launched in 2012. The industry-led action plan brought together ninety UK brands which make up almost fifty per cent of clothing sales in the country. They collectively set targets to reduce their waste footprint by 3.5 per cent, and the amount of clothing in household waste by fifteen per cent by 2020. However, according to its final report, released in October 2021, they reduced the waste footprint by only 2.1% and the share of clothing in household waste by only 4%.

The way we currently make, consume, and discard fashion items is fundamentally flawed

Yet, consumers are increasingly sensitive to the ethical argument, especially since the Covid-19 pandemic. The time spent reflecting on the interconnected nature of the world, our values, and how we can build a better future, has only reinforced this trend. A global survey of readers of the fashion magazine Vogue, found that the number of respondents who say sustainability is an important factor when making a fashion purchase rose to sixty-nine per cent in May 2021, from sixty-five per cent in October 2020.

If fashion brands are taking steps to clean up their businesses and the majority of fashion shoppers are keen to support it, why isn’t fashion doing better at shaking off its reputation as one of the world’s most polluting industries?

It boils down to one simple truth – the way we currently make, consume, and discard fashion items is fundamentally flawed.

Self-esteem and our desire to belong

Clothing is an essential human need, so it’s no wonder that consumption has increased along with global population figures. However, clothes also tap into deeper human needs. Our desire to belong is shown outwardly by dressing in a similar manner to our peers. Our self-esteem and confidence are intrinsically linked to dressing in ways that make us feel good, and we might even attempt to garner respect from others through the labels we wear. The act of getting dressed can also be a form of self-expression and creativity for some. It’s these needs which the fashion industry has manipulated to sell us more and more, sending production skyrocketing in recent decades.

Changes in the geopolitical landscape and technology have also supported this growth. In the 1980s and 1990s, fashion brands in the West gradually began to offshore their production to Asia, where the cost of labour is cheaper. Cheaper clothes meant more purchases, and lower quality became more acceptable to consumers as it became easier to replace items at low cost. With the advent of internet shopping in the 2000s, fashion-lovers were able to shop around the clock from a wider choice of stores. And the rise of social media and smartphones in the 2010s has provided a 24/7 marketing machine for brands to advertise products.

Between 2000 and 2014, clothing production doubled, and the number of garments purchased per person increased by around sixty per cent, according to McKinsey. The pace at which fashion collections are renewed has definitely accelerated. Fashion stores, which used to release two collections a year, now offer new lines every week. And ultra-fast, online fashion retailers aimed at Generation Z consumers, can put up thousands of new products on their sites every day.

This staggering increase in production has put enormous strain on natural resources such as cotton, including the land and water required to grow it, and on fossil fuels that are used to produce polyester. At the same time, it has increased waste in both the supply chain and at the end-of-life stage, and accelerated carbon emissions.

But there is another, more virtuous approach that rethinks the way we produce and consume products from the textile industry.

Thus, clothing recycling is easy to implement, provided that the infrastructure for collecting used clothing and transforming it into new clothing is improved.

While recycling textiles is easily doable, the infrastructure to collect old clothes and transform them into new clothes needs to be improved. As such, brands who use recycled materials are running their own take-back schemes for clothes and accessories. Among the most innovative of these is MUD Jeans, based in the Netherlands. Their leasing model allows customers to pay a monthly fee of €9.95 over twelve months for their jeans, making high- quality, sustainably-made fashion more economically accessible. At the end of that period, customers can keep the jeans, send them back, or start leasing a new pair, enabling them to scratch the itch for a new fashion fix. Any jeans sent back are then recycled into new jeans to be sold, or leased, by the brand.

SPIN, a global community platform created by Lablaco, a company based in Italy, enables members of the public to explore options to extend the wear and life of items in their wardrobe. They can swap, rent or sell back to brands – giving them access to other people’s wardrobes around the world.

Sales of second-hand fashion are also on the rise. Brands which traditionally only sell brand-new items are embracing it to boost their sustainability credentials while making money. Reflaunt, a company based in Singapore, has created software that fashion brands can plug into their websites to allow customers to offer their unwanted items from the label through them. Listed on multiple second-hand marketplaces, customers receive cash or store credits once the items are sold. The platform’s clients include luxury French fashion house Balenciaga and the Swedish premium high-street label Cos.

Many of these ideas are not new. Rental has long been used in the men’s formal wear sector, while thrift stores have been the traditional avenue for those seeking second-hand wares. However, technology is enabling these ideas to happen more widely and more easily. And the involvement of those with fashion experience is making them appealing to a style-conscious audience.

Post-pandemic fashion will not just be about what we wear – it will be a seismic shift in our relationship with it. It needs to be a relationship where business success is not dependent on churning out more and more products, and where old clothes become a resource, instead of waste. This movement also requires a more responsible and sober attitude from consumers. That is the price to be paid for a transition towards fashion that is more virtuous and sustainable.

Who profits from ethnic labels? The UNESCO Courier, January-March 2021

Frugality: A way to a better life? The UNESCO Courier, January 1998