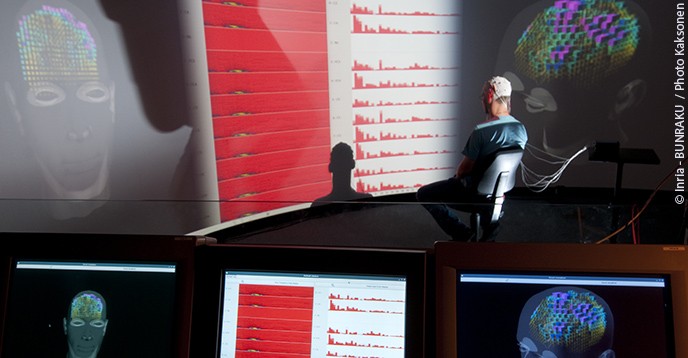 The OpenViBE brain-computer interface software – a collaboration between France’s National Research Institute for Digital Science and Technology and the National Institute of Health and Medical Research – allows a computer to be controlled by thought.

Dictating a text just by thinking about it? Expanding your memory with brain implants? Creating memories in a mouse’s brain? While these innovations are still at the experimental stage, they are no longer in the realm of science fiction. Advances in our understanding of the brain’s mechanisms are now making possible what seemed unthinkable only a short while ago. While this progress holds great promise for the treatment of certain diseases, it also raises important ethical questions.

In its latest report, UNESCO’s International Bioethics Committee warns of the possible infringement of human rights that the use of these new technologies entails.

Traces of healed trepanning [an ancient practice of drilling a hole in the skull] scars show that our ancestors knew that our brains are essential for our survival even in prehistoric times. In many countries, death is now determined by the irreversible cessation of brain activity. Brain activity is the basis of our cognitive state and is unique to each individual – but its principles are shared. By analysing the activity of the brain, we are therefore able to gather information that is inherent to us all – beyond differences in gender, nationality, language, or religion.

Brain activity is central to our idea of human identity, freedom of thought, autonomy, privacy, and our fulfilment as human beings. As a result, the recording (“reading”) and/or modulation (“writing”) of this activity using neurotechnology has ethical, legal, and societal implications.

The birth of a technology capable of recording brain activity dates back to 1929, when the German neurologist Hans Berger (1873-1941) showed that it was possible to record changes in the electrical potential of the human brain by using an electroencephalography (EEG) machine. This led to important advances, such as the accurate diagnosis and treatment of many forms of epilepsy. Since the 1950s, these techniques have been developed, making it possible to collect the electrical activity in specific regions of the brain, and to stimulate them.

Neurotechnology can be used to identify the properties of nervous system activity, to understand how the brain works, diagnose illnesses, compensate for a faulty neuronal circuit, or control brain activity. Today, it is possible to interact with the nervous system via implants, to modify its activity – to restore hearing, for example. Another advance is the use of deep brain stimulation to treat certain forms of Parkinson’s disease.

But the most spectacular developments concern brain-computer interfaces (BCIs), which are designed to record brain signals and “translate” them into commands to control technology. For example, a man who was unable to speak after a stroke ten years earlier, was able to produce sentences using a system that reads the electrical signals from the speech-producing areas of his brain. This type of device combines physical elements (electrodes) with artificial intelligence (AI) algorithms.

Investment in brain research has accelerated in recent years. In 2013, the United States launched the BRAIN Initiative, while the European Union has developed the Human Brain Project. Australia, Canada, China, Japan, and the Republic of Korea have also developed extensive programmes to “crack the brain code”. The aim is to better understand the structure of the brain and mental processes, and to develop new technologies to treat certain diseases and compensate for some forms of disability.

The stakes are high. Diseases of the nervous system, both neurological and mental, account for a significant part of our health-care expenditure. The annual costs – estimated in 2014 at over 800 billion euros each year across the European Union – are immense. The global annual cost of Alzheimer’s disease alone is expected to reach €2 trillion by 2030. Multiple sclerosis is the main cause of disability in young people, thirteen per cent of the population is affected by migraines, and strokes are set to become the leading cause of death. Neurotechnology can offer some solutions to treat these diseases.

Brain activity is central to our idea of human identity

A market like this whets appetites, and not just in the field of medicine. Recently, more than a billion dollars were invested in Neuralink, entrepreneur Elon Musk’s brain-machine interface company, to develop brain implants to improve memory. Ultimately, the project aims to hybridize the brain and AI. And Facebook paid about $1 billion to acquire CTRL-labs, a brain-computing startup working to develop augmented-reality glasses that will be able to transcribe thoughts onto a computer screen without the need for a keyboard.

The fact is that brain data – which contains unique information on the physiology, health and mental status of an identified individual – has become a sought-after commodity that goes far beyond the medical sector. The neurotechnology market is looking to expand into other areas, such as affective computing, which aims to interpret, process, and simulate different human emotional states; and neurogaming, a form of gaming that involves the use of a brain-computer interface, allowing players to interact without the use of a traditional controller. Another area is neuromarketing, which studies the brain mechanisms that may be involved in consumer behaviour. And education is yet another field in which neurotechnology can be applied.

This growing non-medical exploitation of brain data poses challenges for ethics and human rights. To the extent that it exposes individuals to intrusion into their most intimate privacy, to the risk of their personal data being hacked, and to a breach of confidentiality and digital surveillance, it requires governance to be put in place.

In its latest report, UNESCO’s International Bioethics Committee (IBC) highlights the benefits that may result from the development of neurotechnology. It also warns of the possible infringements of fundamental human rights that these advances may cause – human dignity, through respect for the integrity of each individual’s brain; freedom of thought, if devices interfere with our capacity for judgement and decision-making; privacy, in case of bias in the algorithms used; the risk of abusive, unauthorized, or coercive use for malicious purposes; and informed consent. The report also raises the specific question of the interests of the child, since childhood is a crucial period of brain development in the life of the individual.

In view of these challenges, the IBC considers that “neurorights” – intended to protect our brains from the risks to which they are exposed by the development of neurotechnology – encompass some human rights that are already recognized by international law. But given what is at stake, these are sensitive rights that need to be emphasized. These rights are based on the recognition of the fundamental rights of all individuals – including physical and mental integrity, mental privacy, freedom of thought and free will, and the right to enjoy the benefits of scientific progress. The report also stresses the need for people to decide freely and responsibly on issues related the use of neurotechnology, without any form of discrimination, coercion, or violence.

The ethical risks of AI, The UNESCO Courier, July-September 2018

Working for, not against, humanity, The UNESCO Courier, July-September 2018