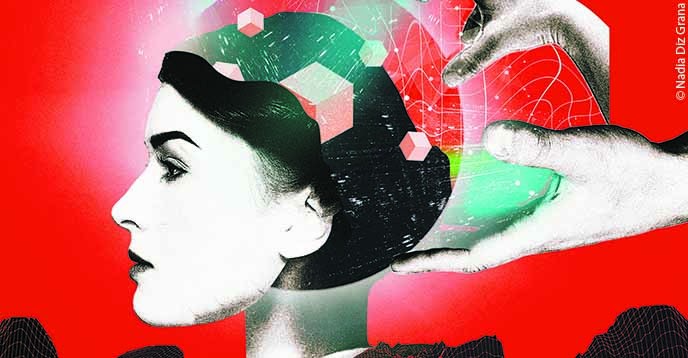 Although there has been spectacular progress in neuroscience in recent decades, the possibilities that have been opened up by the development of brain-computer interfaces are not infinite. An extremely complex mechanism, the brain has far from revealed all its secrets.

R. Douglas Fields
A fellow of the American Association for the Advancement of Science, and adjunct professor at the University of Maryland, United States. His latest publication is the 2020 book, Electric Brain: How the New Science of Brainwaves Reads Minds, Tells Us How We Learn, and Helps Us Change for the Better.

In 2016, the United States Department of State reported that personnel at the US Embassy in Havana, Cuba, were attacked by a neuroweapon that caused traumatic brain injury. After intensive investigations produced no evidence of any type of direct energy weapon, the reported brain injury, which takes various forms, is now called the “Havana Syndrome”.

The prospect of mind control by using electrodes implanted in the brain or by beaming electromagnetic, sonic or laser light through the skull has a long history. Notably in the 1950s and 1960s, advances in electronics enabled neuroscientists to insert stimulating electrodes into the brains of experimental animals and humans to investigate how the brain functions and controls behaviour, both normal and abnormal. Public alarm swelled as leading neuroscientists advocated using radio-controlled brain stimulation to correct deviant behaviour.

During the Cold War period, brainwashing techniques to reprogramme the brain and overwhelm the free will of hapless victims grew out of new research in psychology and psychopharmacology. The scare of brainwashing soon vanished, as it became obvious that the idea of covert mind control was a fantasy.

Today, stunning advances in brain science and new sophisticated technology to monitor and manipulate brain function are fuelling renewed fear of neuroweapons and mind control. Electroencephalography (EEG), magnetic resonance imaging (MRI) of the functional brain and other methods can be used to reveal a person’s thoughts, emotions, and intentions.  Brain-computer interfaces (BCI) can enable information to be read out of the brain into computers to control prosthetic limbs, and information can be delivered into the brain through electrodes to generate sensations, emotions, or restore rudimentary vision to the blind.

Recently, it has even been made possible to get two people to play video games “telepathically”. Information can be picked up from one person’s brain and transmitted over the internet to stimulate the brain of a recipient to enable two people to co-operate over long distances – that is, with their intercepted thoughts and involuntary responses commanded by computers detecting, transmitting, and generating electrical activity in the brain.

These experiments are real. However, the prospect of anything like mind control by electrical stimulation is recognized as being vastly beyond the technical capability and biological feasibility of achieving. “Could a ruthless dictator stand at a master radio transmitter and stimulate the depth of the brains of a mass of hopelessly enslaved people? This Orwellian possibility may provide a good plot for a novel, but fortunately it is beyond the theoretical and practical limits of electrical brain stimulation,” José M.R. Delgado (1915-2011), the Spanish  neuroscientist, concluded in his 1969 book, Physical Control of the Mind: Toward a Psychocivilized Society.

As scientists have learned so much more about how complex the human brain is in the half century since Delgado made that observation, this fact has only become more obvious. Neuroscientists do not understand how information is coded and processed in neural circuits. Therefore, it is impossible to “read out” or “write in” information into and out of the brain as is popularly assumed.

Brain-computer interfaces work by recognizing neural firing patterns accompanying specific functions, much like Amazon algorithms that crunch massive amounts of data to predict what movie or book you might want to purchase next. This read-out and analysis of neural information via implanted electrodes, EEG, or functional MRI, requires prolonged repetition and intense co-operation and practice by the participant to enable the computer programme to recognize that a certain pattern of neuronal firing is associated with, say, an intention to move a finger.

In this sense, BCIs work much the way we learn to shift gears in an automobile by listening to the sound of the engine. Furthermore, these interfaces require that the brain learn through trial-and-error how to generate those particular neural firing patterns that the computer can use to carry out the intended function.

Likewise, inputting information into the brain is not possible in anything like the way it is popularly assumed and feared. Simply because we don’t know how. The neural code is not known. Even if that information code were known, which neuron to stimulate out of the billions in the human brain to evoke an intended function is not known. Scientists can predict which brain region to stimulate, but not which neuron. Moreover, a neuron in a particular spot of one person’s brain that controls a specific function will not be the same neuron in another person’s brain. Finally, stimulating one neuron would not be adequate to control a person’s behaviour, because brain function relies upon the co-ordinated operation of complex neural circuits involving hundreds or thousands of neurons. It is impossible to stimulate large networks of neurons in a co-ordinated way to impose a specific directed behaviour for mind control.

These methods of BCI rely upon intense co-operation, repetition, and learning by the person whose brain is being stimulated. What scientists surmise is that some artificial sensation is evoked in the brain by the stimulation, and that it is the brain’s remarkable learning capability and adaptability to begin to recognize that artificial event and then use it in a practical way – for example, to move a robotic arm or interpret flashes of light evoked by stimulating the visual cortex of a blind person. This is a far cry from the fantasy of covert mind control.

The progress of neuroscience is not in itself a cause for concern. It is the use to which it is put that is the problem

Fear of the unknown

The future is unknowable. Algorithms and artificial intelligence (AI) to mine data are becoming vastly more powerful. Technology and biological understanding will continue to bring us closer to understanding how the human brain operates, and to develop means of modifying its function for medical purposes.

This progress is not in itself a cause for concern. It is the use to which it is put that is the problem. The fact is that nearly every human discovery or invention, from the atom to viruses, is ultimately turned into a weapon by our species. Throughout history, Homo sapiens seems perpetually balanced on the edge of violence and co-operation with its fellow beings. Just as the internet brought tremendous transformations and benefits to society, but also became corrupted to incite violence, there is every reason to believe that the tremendous benefits of advances in neuroscience will, someday if feasible, be subverted for unethical purposes.

For the time being, there is no evidence of mind control, nor any evidence of an attack by a neuroweapon of any kind to explain the “brain fog” and other unexplained medical symptoms of the “Havana Syndrome”.

In spite of the fear and sensational press coverage of this supposed neuroweapon, it is important to balance this potential – but presently unsubstantiated – threat with the real threats that we now face.  Fear of mind control pales in comparison to existing weapons of war, interrogation, torture, and brutality that are real and present threats. Ours is a species that embraces the prospect of “mutually assured destruction” with atomic weapons as being perfectly logical and justified.  That is a dire reality that can be unleashed with the push of a button, not a fantasy-fuelled fear.

A bionic hand that sees, The UNESCO Courier, July-September 2018

The knot in the brain, The UNESCO Courier, July-August 2001

The changing face of the life sciences, The UNESCO Courier, March 1988