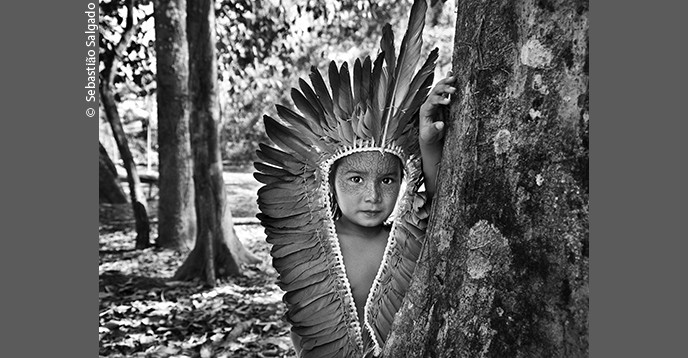 Manda Yawanawá, the daughter of Jeré Yawanawá, from the village of Escondido, Rio Gregório Indigenous Territory, state of Acre, Brazil, 2016. The Yawanawá community, which had only 120 members in the 1970s, has been able to rebuild itself and reconnect with the knowledge of the elders.

Skies filled with inky clouds, forest-dwellers captured in the intimacy of their daily lives, mountains emerging from the vegetation. The Amazon that Sebastião Salgado shows us is not one of clichés – all luxuriance and vivid colours, with variations of bright green foliage, purple earth, and rivers irrigating the forest. On the contrary, Salgado’s images portray a world in chiaroscuro, grandiose, complex. Fragile too.

For the Amazon – home to 370,000 Indian indigenous peoples, and a carbon sink that absorbs almost ten per cent of the world’s CO2 – is under threat. According to a November 2021 estimate by Brazil’s National Institute for Space Research (INPE), deforestation, much of it illegal, has increased by almost twenty-two per cent in one year – with more than 13,000 new square kilometres of forest felled.

With his book, Amazônia, published in 2021, the Brazilian photojournalist pays tribute to the beauty of the Amazon rainforest, which he believes is still not too late to save. “My wish, with all my heart, with all my energy, with all the passion I possess, is that in fifty years’ time, this book will not resemble a record of a lost world,” Salgado says. “Amazônia must live on.”

In 1998, Salgado and his wife, Lélia, founded  Instituto Terra, located on the photographer’s family farm, in the Rio Doce river valley. To restore this land which had been degraded by erosion, the couple established a reforestation programme in Minas Gerais state, planting three million trees in twenty years.

“All the biodiversity has returned, even the jaguars, which were thought to be extinct in our region,” enthuses the photographer. The Institute, which is part of the UNESCO Mata Atlântica biosphere reserve, also has an educational vocation, raising awareness about the environment. These are all objectives of UNESCO’s Man and the Biosphere (MAB) programme – which celebrated its 50th anniversary in 2021, and with which Salgado is   actively involved.

Amazônia is also a photography exhibition. After Paris, Rome and London, it travels to São Paulo, Rio de Janeiro, and Manchester in 2022. Sebastião Salgado's images were also exhibited at UNESCO's 75th anniversary celebrations in November 2021. 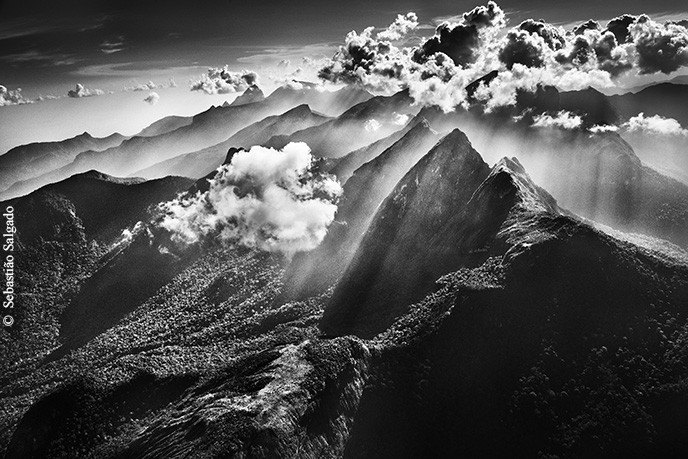 The Marauiá mountain range, Yanomami Indigenous Territory, municipality of São Gabriel da Cachoeira, Amazonas state, Brazil, 2018. One of the most diverse ecosystems on the planet, the Amazon is home to 16,000 species of trees. 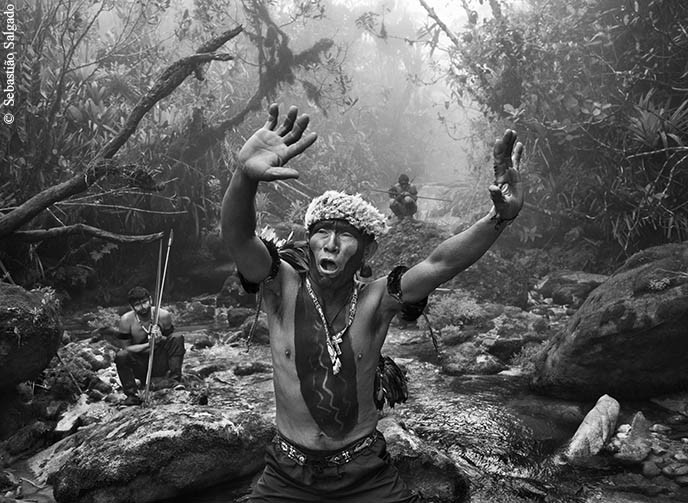 A Yanomami shaman, Amazonas state, Brazil, 2014. The 40,000-strong Yanomami peoples, who inhabit Brazil and Venezuela, form  the largest indigenous group in the Amazon. 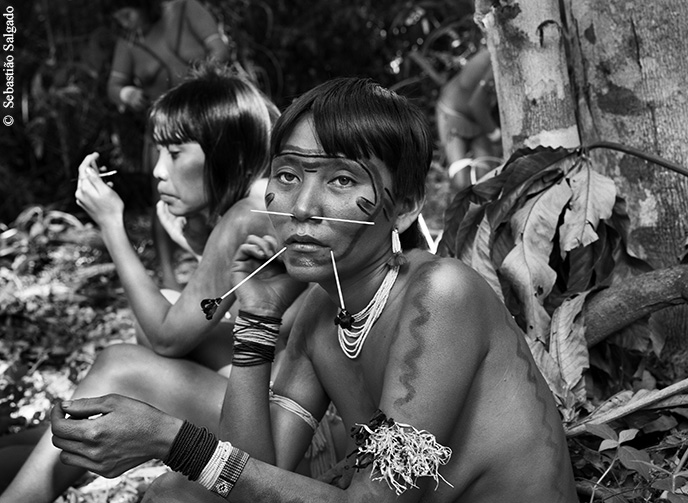 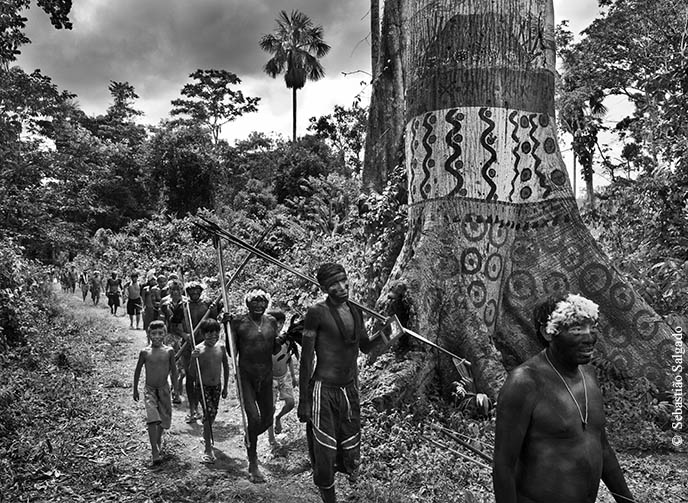 The inhabitants of Watoriki walk past the sacred Ceiba pentandra, a gigantic tree at the entrance to the village. Yanomami Indigenous Territory, Amazonas state, Brazil, 2014. 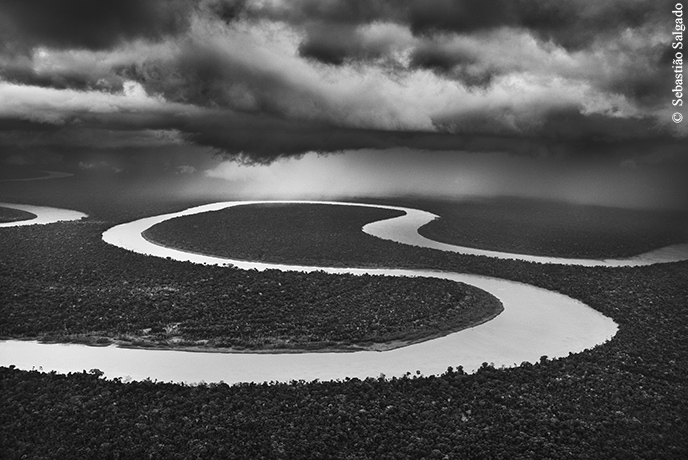 Heavy rains over the Juruá River, Amazonas state, Brazil, 2009. About 1,000 litres of water evaporate daily from each large tree. These billions of trees generate a flow of moisture into the air – far greater than the Amazon rivers themselves. 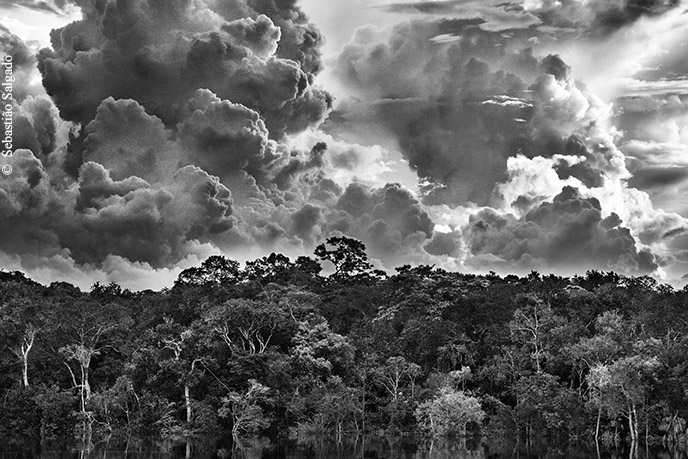 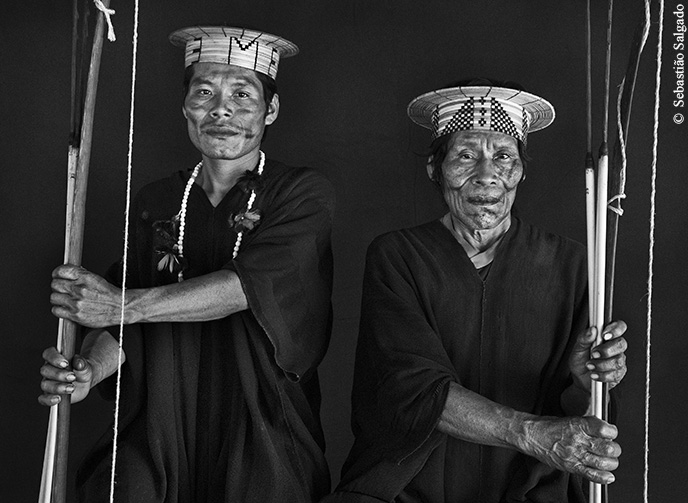 Manitzi Asháninka (right) and his son Tchari, or Davizinho (left), Kampa do Rio Amônea Indigenous Territory, Acre state, Brazil, 2016. An indigenous group with one of the longest-known histories, the Asháninka can trace back their economic and cultural relations with the Inca Empire to the fifteenth century.

Land-hungry in Brazil, with photos by Sebastião Salgado, The UNESCO Courier, July-August 1998.

A Global report on people at work by Sebastião Salgado, The UNESCO Courier, April 1988.