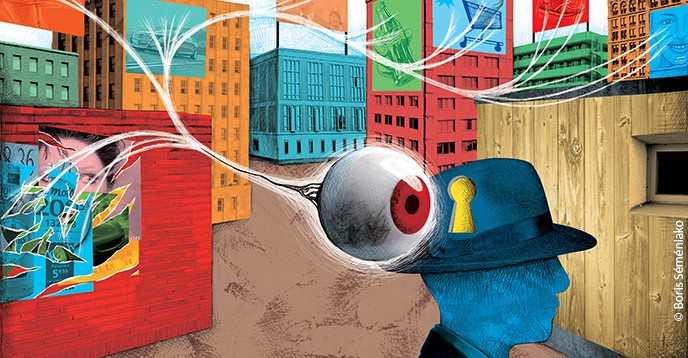 We now know how to induce hallucinations in mice by manipulating their cerebral cortex. What we can do in mice today will be possible to do in humans tomorrow. Neurobiologist Rafael Yuste warns that there is an urgent need to put regulatory frameworks in place to protect the exploitation of our brain activity.

Chair of the NeuroRights Foundation and a professor of Biological Sciences and Neuroscience at Columbia University in New York, Yuste is campaigning for the protection of our “neurorights”.

Your work into the brain began in Madrid, treating patients who had brain disorders, including paranoid schizophrenia. How did that lead to your career in neuroscience?

I was sent to a hospital where the most severely ill patients were being treated. A lot of them were paranoid schizophrenics and we had to interview them with bodyguards present. I was shocked to realize how smart they were. These are not people that are low-functioning, these are people like Sherlock Holmes [the fictional British detective]. In fact, Sherlock Holmes was probably a paranoid schizophrenic. I remember interviewing one of them and it was scary. This person was super-smart, and he threatened me and my family personally. He figured out where I lived from my accent and said, “I’m going to come to your house and kill your father!”

I realized that these people had amazing brains but there was a switch in them that was turned off. They used their intelligence against themselves and against society as opposed to bettering their lives and enhancing their environment. If we could only figure out what’s wrong with them, we might be able to flip that switch and send them out back into the world. But we cannot do that, because we don’t understand schizophrenia, and we don’t understand schizophrenia because we don’t understand the brain. That made me step back in my career ambitions and say, ‘I really want to have an impact on these patients suffering from mental illnesses, so I’m going to have to understand the basic mechanisms of brain function’. And that’s what I did with my career.

Why is it so difficult to understand how the brain works?

The reason we haven’t understood the brain yet is because of the sheer number and complexity of the neurons in the brain and the circuits that they build. This is why Santiago Ramón y Cajal, one of the founders of neuroscience, compared the brain to an impenetrable jungle where many investigators have been lost.

How does your current research into mice’s brains at Columbia University help to understand how the human brain works?

In my opinion, the shortest way to reach the dream of understanding the mind is to figure out the cerebral cortex of mice. Shared by all mammals, the cortex, right under our skull, looks very similar, except for the size. Cortex means ‘bark’ in Latin and it covers the brain like bark. This thin strip of tissue somehow magically generates everything we are: our perception, our thoughts, our memories, our emotions – everything comes out of the firing of these neurons. We have been using mice for thirty years now, to understand brain circuits of normal mice and of mice that suffer brain diseases – the mouse models of schizophrenia, autism, dementia, Alzheimer's, Parkinson’s, epilepsy, etc.

In our work on mice, we’ve been able to decode and manipulate cortical activity to the point that we can implant hallucinations into mice – so that they behave as if they are seeing something that they are not seeing. Scientists at the Massachusetts Institute of Technology (MIT) in the United States have implanted false memories into mice. This leads to the entire privacy issue of reading not just thoughts, things you are conscious of, but even worse – decoding your subconscious brain activity.

These types of experiments have made me more and more passionate about the idea behind NeuroRights to protect the human brain, because these methods can change behaviour. We can end up manipulating a mouse as if it were a puppet. What we can do in mice today, we can do in humans tomorrow.

The development of cerebral rights is a human rights issue

The NeuroRights Foundation, of which you are the Chair, engages the United Nations, technology companies, and the public on the ethical implications of neurotechnology and artificial intelligence (AI). Why should we be concerned about these issues?

In 2017, twenty-five of us met at Columbia University to consider the ethical and societal implications of neurotechnology. We represented The BRAIN (Brain Research Through Advancing Innovative Neurotechnologies) Initiative from the US, and from all the other countries that have brain initiatives and are part of the International Brain Initiative (IBI)  – China, Japan, Korea, Australia, Israel, and the European Union. There were experts in building neurotechnology, neurosurgeons and clinicians, neurologists; people that came from AI; from the tech industry; experts in building algorithms; experts in bioethics and the law.

These experts also formed what we named the Morningside Group, to propose ethical guidelines for neurotechnology and AI. The first of these was the development of cerebral rights that we call neurorights. The reason we proposed this is because we think this is a human rights issue – since the brain generates the mind, the mind is what makes us human, so the core of our humanity is our mental ability, our mind. Any technology that patches the tissue that generates those mental and cognitive abilities is going to impact the core of ourselves, our humanity.

In your view, which is the most urgent neuroright that needs to be protected?

Our right to mental privacy, so that the content of our mental activity is not decoded without our consent. This needs to be done now, because neurotechnology is being developed all over the world, proudly set in motion for the benefit of patients. But there are a lot of tech companies and neurotechnology companies that have been created to exploit these methods  to record the activity of the brain and link it directly to a computer – like a brain-computer interface (BCI).

The idea is that, instead of having it in your pocket, the iPhone of the future will be wearable on your head, or maybe a chip implanted inside your brain. When this happens, the data that is collected by this BCI technology will become the property of the company, because there is no regulation.

How can we ensure that the UN and governments across the world create the right legal and regulatory frameworks to protect neurorights and mental privacy in the same way that they have laws to protect human rights?

The purpose of the NeuroRights Foundation is to promote the establishment of neurorights, and we’re working both with countries and the UN to consider this question of neurotechnology. In Our Common Agenda, the UN report [released in September 2021] which addresses the challenges to the Universal Declaration of Human Rights, UN Secretary-General António Guterres specifically mentions neurotechnology as one of the frontier issues that needs to be taken care of in the next six years.

We’re also working with countries – Chile may be the best example of this. The Chilean Senate has approved a constitutional amendment that declares cerebral integrity as a basic human right. As soon as the President signs this amendment, the constitution will protect the brains of the citizens from intrusions that are not allowed by the law. That could serve as a model for other countries to follow as they set out ethical guidelines for neurotechnology.

Neurotechnology will lead to a new renaissance in our history

Do you think there’s scope for neurotechnology and AI to transform our societies for the better?

Absolutely, yes. I am completely optimistic. I think that neurotechnology will lead to a new renaissance in our history. We have to go full speed ahead – because of the patients, who look us in the eye every day and say ‘Will you help me?’– and we have to do it with guard-rails, with intelligence. Technologies are always neutral, but they can be used for good or for bad. The onus is on us to make sure the technology is for the benefit of mankind, not a detriment to our progress.

What key message should we take away?

This is not science fiction. Let’s act before it’s too late.

“We must educate algorithms”, The UNESCO Courier, October-December 2020