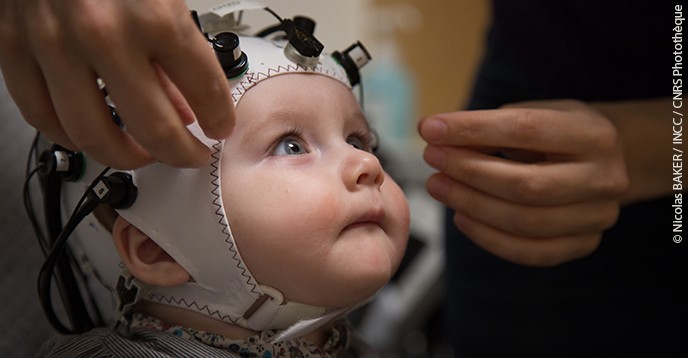 Measuring the brain activity of a six-month-old baby using an electroencephalogram at the Babylab of the Integrative Neuroscience and Cognition Centre, the French National Centre for Scientific Research (INCC/CNRS) and the University of Paris.

In the 2000s, educational neuroscience was regarded by some as a tool capable of revolutionizing schools. Twenty years later, the field may not have lived up to all its promises, but it remains a relevant resource for providing scientific validation to some educational practices.

When children start attending school, they are eager to learn, to explore, and curious about their surroundings. But as they progress through school, this motivation tends to erode, and can even turn into frustration. One of the major challenges facing teachers is how to maintain, or generate, this interest beyond early childhood.

Around the year 2000, educational neuroscience was one of the most promising approaches on how to reform our school systems. Scientific research on learning mechanisms seemed to open the way to new methods that could improve concentration, develop motivation, or promote memorization in pupils. But twenty years later, the results are mixed. Although the work of researchers has led to the introduction of some promising learning devices, the revolution that was announced has not really taken place.

Neurosciences point to the role of emotion and pleasure in learning

When neurosciences are applied to education, they show that it is important to involve pupils in order to stimulate their attention; that it is advisable to alternate learning and testing phases; or that reactivating knowledge several times during the year enables it to be stored in long-term memory. They also point to the role of emotion and pleasure in learning, and thus question the usefulness of punishment or marking – which is often stigmatizing and not very effective. Researchers have also emphasized the value of rituals to prepare children for a work session. These conclusions are often in line with the practice of teachers.

“I teach mathematics and physics, which is why neurological explanations and evidence appeal to me,” says Gerald Stachl, headmaster at a high school in Wiener Neustadt, about fifty kilometres from the Austrian capital. “We have experienced many of the findings of neuroscience empirically in the classroom, but it is good to have scientific confirmation of this,” he says. For example, studies have shown that the division of lessons into fifty-minute segments is poorly suited to the learning pace of students.

From theory to practice

While some of the work of neuroscientists raises interesting issues, it is difficult to transfer laboratory data into the classroom. The centralization of the education system, regulations, and curricula leave little room for experimentation. What’s more, we are only just beginning to understand the complex mechanisms of learning. Brain scans can show which regions of the brain are activated when performing a given task. But they don’t explain the psychological mechanisms at hand, which may play an even more important role. Also, each individual learns at a different pace and in different ways.

Teachers are divided about the value of using cognitive science in the classroom. “I do not see much usefulness or direct consequences of neurological research on teaching practices,” says Nicole Vidal, professor at the Freiburg Advanced Center of Education in Germany. “After the initial hype, it turned out that deriving educational applications from brain functionality is not as easy as was first thought.”

Stefan Hopmann, professor of education at the University of Vienna, is also sceptical about neuroscience in education. He sees only a little potential in the field, adding that there are some publications on the subject that lack scientific rigour. “A lot of common-sense pedagogical knowledge is inflated to more than what it actually is,” he observes.

Instead of revolutionizing the way we teach, educational neuroscience might help us to overcome specific problems and learning disorders such as dyslexia or attention deficit, Vidal concurs.

The sacredness of grades

“The hype about educational neuroscience has ended, unfortunately,” declares Thomas Mohrs, an education scientist at the University of Education, Upper Austria (PHOÖ), in Linz. He is convinced that neurodidactics is the scientific proof of what supporters of progressive education have been practising for many decades.

In particular, Mohrs criticizes the sacredness of grades and the negative effects on students of the race for performance during exams. “Fear is the number-one killer of creativity,” he insists. Instead of condemning kids for “failing”, teachers should encourage them to make mistakes – and learn from them. Studies in educational neuroscience confirm this again and again, he says.

“One of the most fundamental scientific principles is ‘trial and error’. It is essential for any scientific progress,” Mohrs adds. Only by being allowed to make mistakes can we learn from ourselves and get better, according to him. Yet schools are not geared to helping students learn from their mistakes, but rather to condemning them.

However, while pressure can be destabilizing, it also acts as a stimulus. “With no pressure at all, certain incentives might be missing,” Stachl explains. The problem is that even modest pressure applied to students to ensure they pass their yearly exams almost inevitably results in kids and teachers focusing on their weaknesses instead of their strengths. The entire class then runs the risk of falling into “the trap of the average”, as Austrian geneticist Markus Hengstschläger points out in Die Durchschnittsfalle, his bestselling book published in 2012.

Stachl agrees with this point of view. “We should certainly avoid having lessons only with the entire class present,” he says. To some extent, of course, better pupils can help, by being peer mentors to those who struggle. But when this is applied too often, the more advanced pupils do not get challenged enough, he argues. This is why he advocates separate learning settings in smaller groups with similarly skilled pupils. This not instead, but in addition to, the regular lessons with the entire class. Educational neuroscience supports this approach, he points out.

“The school system clearly needs reforms, but in recent years these are almost never evidence-based,” says Vidal. In the absence of an overall strategy, there is a tendency to “shop around” in educational neuroscience. “This has nothing to do with actual empirical research,” she claims. She also warns of commercial interests, which are often involved.

In fact, although most teachers are open to neuroscience data, no Austrian school has  systematically integrated neurodidactic approaches in their teaching.

Although educational neuroscience is not the miracle cure hoped for by some, it does appear to be an additional resource for teachers, which can help them to identify practices that have proved effective. But it is important that teachers are aware of the results of this relatively new and evolving field – which is often not the case.

An opportunity to reinvent school, The UNESCO Courier, July-September 2020

Early literacy: the key to fluency, The UNESCO Courier, July-September 2017