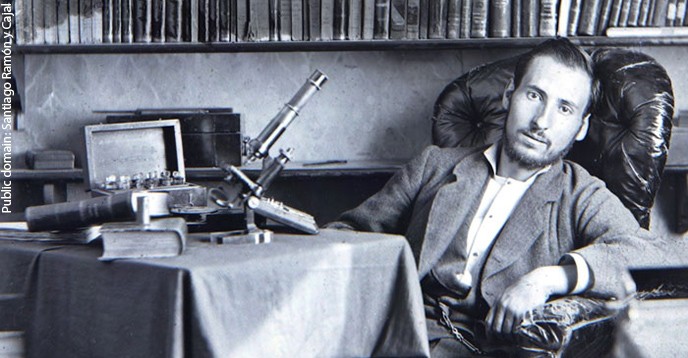 The Spanish neuroscientist, pathologist, and artist Santiago Ramón y Cajal (1852-1934) was fascinated by the brain. His intricate, beautiful, and accurate illustrations of the inner workings of the brain are still used in neuroscience to demonstrate the neural architecture that underlies memory and human thought.

In 1877, Cajal saved up the money he had earned as a medical officer in the Spanish army to buy himself a microscope. Looking through the lens, he studied and drew – free-hand but with great precision – the tiny structures within the brain, including neurons, or nerve cells.

Cajal based his work on a technique pioneered by the Italian physician Camillo Golgi (1843-1926) in 1903. Using silver nitrate to stain nerve tissue, Golgi was the first to stain neurons black, so they could be distinguished from the surrounding transparent cells.

Cajal perfected this technique, using a gold stain in 1913 to map the central nervous system. He created an extraordinary catalogue of detailed and meticulous drawings, covering different regions of the human brain, and the spinal cords of young animals.

Cajal started from the assumption – which would not be scientifically proven until the 1950s – that neurons in the brain are in touch, but do not touch each other. Known as the neuron doctrine, it states that every neuron in the brain is separate and that neurons communicate across synapses. In 1906, Cajal and Golgi were jointly awarded the Nobel Prize in Physiology or Medicine. Cajal was the first Spanish scientist to be awarded the prize.

In 2017, Cajal’s archives – which included scientific manuscripts, drawings, paintings, photos, books, and correspondence – were included in the UNESCO Memory of the World register. Subsequently, there have been calls for Cajal's cultural archive to be given permanent space in a dedicated museum to showcase his discoveries and their influence on neuroscience today.

Meanwhile, Cajal’s work continues to bridge science and art. In 2020, volunteers across six countries collaborated to create the Cajal Embroidery Project at the University of Edinburgh’s Edinburgh Neuroscience community. The eighty-one exquisite hand-embroidered  panels of Cajal's drawings were displayed at the virtual FENS (Federation of European Neuroscience Societies) Forum in 2020, and featured on the front cover of The Lancet Neurology in September 2021.