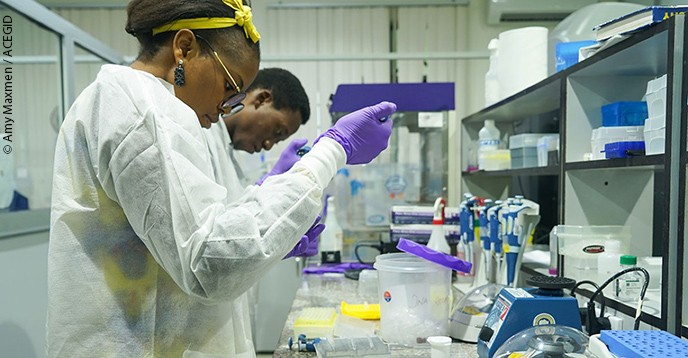 Detection of the Lassa virus in blood samples in Nigeria using CRISPR, a genome editing tool. Genomic tools like this could enrich neurological research in Africa.

The field of neuroscience remains largely dominated by industrialized countries. Africa could still make a significant contribution to global research, provided that new policies are put in place to stimulate scientific innovation on the continent.

Neuroscientist and post-doctoral research fellow at the School of Life Sciences, University of Sussex, in the United Kingdom. His research is focused on understanding the process of degeneration in Alzheimer’s disease.

The revolution in neuroscience that is happening today is taking place away from African laboratories. This is all the more regrettable given that Africa is well-placed to participate in global neuroscience research. The continent has the world’s greatest genetic diversity – which is crucial to the understanding of the processes governing human health and disease – and  significant medicinal plant resources.

Limited access to scientific training, poor funding, and heavy teaching loads on scientists are all obstacles to innovation in Africa. In addition, there is a lack of reliable energy sources and research facilities. This makes it easier to understand why Africa generated only 0.11 per cent of the world’s patents in 2013, according to the 2021 UNESCO Science Report: The race against time for smarter development.

Recognizing the importance of the global race in the field of brain research, the world’s top economies – including Europe, the United States, China, and Japan – have invested in several large-scale projects to study the brain, and to the application of this brain data to accelerate the manufacture of new technologies.

In spite of its strengths, Africa is still lagging behind. To better understand this paradox, and the diversity of African neuroscience, our team analysed 5,219 articles affiliated with African institutions over two decades, and published an extensive study on the subject in June 2021.

Neurodegeneration and brain injury are the main focus of research programmes conducted by African neuroscientists. Investigations into diseases like konzo, dementia, meningitis, stroke, epilepsy, and HIV-related neurological manifestations may reflect a growing awareness among scientists about the prevalence of these conditions and the need for more African-led research into them. By comparison, research on motivation and emotion, motor systems, cognition, and sensory systems is less prevalent.

One key aspect of integration into the global research community comes through international scientific collaborations. Here, the lack of funding and barriers related to visa processes have long made it difficult for many African researchers to engage with colleagues abroad. Even so, intra-African collaborations are not as developed as those in Europe or North America.

Another striking feature is that most collaborations in Africa are with South Africa. While some are based on historical, linguistic and cultural ties, others are primarily influenced by the availability of research resources that are more advanced in South Africa than elsewhere on the continent.

Future efforts to boost African neuroscience must therefore encourage intra-African collaborations and the sharing of resources. At the same time, collaborations with the Global North need to ensure equity so that African partners are not relegated to the sidelines and are given the opportunity to shape projects.

Cutting-edge technologies have been among the major drivers of breakthroughs in neuroscience. Therefore, it is no surprise that countries that have achieved high scientific success to date are those that have access to these state-of-the-art technologies.

However, less than thirty per cent of African neuroscience publications – with the exception of The Gambia – used equipment such as fluorescence and electron microscopy, molecular biology, and cell culture. This indicates that investment in African neuroscience also requires the modernization of research tools.

Another finding specific to Africa: the study of endemic medicinal plants plays an important role in African neuroscience publications. Many of these plants have been used for centuries for the treatment of diseases, but have recently attracted criticism because of false promises by some practitioners – and even proved harmful in some cases. To document the scientific validity of these plants, African researchers, particularly those in West Africa, are investing heavily in this branch of neuroscience, to explore the therapeutic potential of medicinal plants. By contrast, this field of study is generally ignored by countries in the Global North, represented in our study by Australia, the United Kingdom, US, and Japan.

In 2006, the African Union (AU) recommended that its member states invest one per cent of their gross domestic product (GDP) on research. However, no African country currently meets this recommendation. With the exception of Southern Africa, all countries on the continent rely heavily on funding from international sources, mainly from Europe and North America. It is no surprise then that Egypt and South Africa, which have the highest number of neuroscience publications on the continent are the only two countries investing close to the AU’s recommendation.

It is clear Africa has the potential to take the lead in neuroscience. Our study highlights the growing number of scientists, scientific contributions, and the impact of neuroscience on the continent. The continent has many philanthropists and charitable organizations that can help fund scientific research to build on its research of medicinal plants and, above all, its genetic diversity. However, local funders need to increase their investments to supplement  international funding, boost scientific research infrastructure, and accelerate innovation.