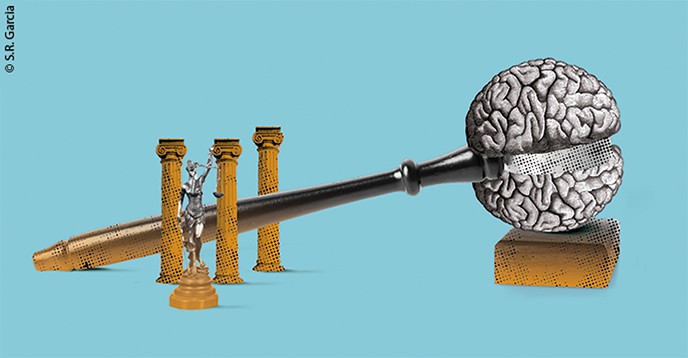 Chile is set to become the first country in the world to legislate on neurotechnologies and include “brain rights” in its constitution.

Science journalist, based in Santiago, Chile.

In 2021, Chile’s Senate unanimously approved a bill to amend the constitution to protect brain rights or “neurorights”. The Chamber of Deputies reviewed and approved the amendment in September that year. It is now expected that the bill will be signed into law by the country’s president.

Once the process is completed, Chile will become the world’s first country to have legislation to protect mental privacy, free will and non-discrimination in citizens’ access to neurotechnology. The aim is to give personal brain data the same status as an organ, so that it cannot be bought or sold, trafficked or manipulated.

At the same time, a constitutional reform to amend Article 19 of the Magna Carta, the country's constitution, is being considered to “protect the integrity and mental indemnity of the brain from the advances and capacities developed by neurotechnologies”.

The adoption of such a legal arsenal may seem premature in view of the development of neurotechnologies, which are still limited in their capacity to act on the human brain. But experts are already sounding the alarm and insisting on the need to legislate before intrusive applications become widespread – especially as progress in the field of neurotechnology continues to  accelerate.

It was precisely this proliferation of technological advances that prompted the Chilean Senate's Future Challenges Commission to take an interest in neurotechnology three years ago. Following a visit by Rafael Yuste – a neurobiologist at Columbia University, New York, and one of the initiators of the BRAIN Initiative, a United States project to map the human brain – the Commission began to be concerned about the risks these advances pose to human security and free will.

While the development of neurotechnology offers hope for many patients – including those with paralysis or degenerative diseases such as Parkinson's or Alzheimer's – it could lead to the manipulation of the human brain.

“Regulations must evolve quickly,” warns Guido Girardi, senator and president of the Commission, and one of the initiators of the legislation. "There are already technologies that can directly read the brain, decipher what people are thinking and feeling, but also implant feelings that are not one’s own.”

More than the technology itself, it is the potential applications that are of most concern. “If we wait for the technology to mature, we may never be able to control it,” warns Carlos Amunátegui, professor at the law school of the Pontifical Catholic University of Chile, and one of the experts appointed by the Commission to draft the legislation.

“It would be naive to think that these advances will not translate into commercial applications,” says Pablo López-Silva, a psychologist and professor at the University of Valparaiso. “While the development of these technologies is not a problem in itself, it can cross dangerous boundaries if there is no regulation.”

Such applications, he explains, could be hacked or contain “neuro cookies” that would allow them to identify a consumer's preferences, and eventually, to implant new ones.

Legislation must be broad enough to be able to adapt to new technologies, while ensuring the protection of citizen

Chile is not the only country concerned about the legal vacuum that surrounds neurotechnologies. Spain, US, France, and more recently, Argentina, have begun to study the issue. The United Nations and the Organization of American States have also taken a keen interest in the subject.

But the task is complex. Legislation must be broad enough to be able to adapt to the evolution of new technologies, while ensuring the protection of citizens. “The drafts under discussion do not define what mental activity or neural connections are,” says Pedro Maldonado, director of the Department of Neuroscience and associate researcher at the Millennium Institute of Biomedical Neuroscience (BNI) at the University of Chile’s Faculty of Medicine.

The question may seem theoretical, but it is crucial to the extent that neuroscience is at the frontier between brain activity and what creates an individual’s own identity. “We are much more than neuronal activity, even though this activity is clearly necessary for us to be the type of person we are,” states López-Silva.

The legislation to regulate neuroscience also raises the issue of consent. Before granting permission to an application that uses data on their habits, citizens/consumers must be able to make an informed decision – that is, know exactly how the data will be used. It is therefore essential that this information is really accessible to everyone, López-Silva emphasizes.

Another key issue is access. It is essential that everyone, without discrimination, is able to benefit from the advances generated by neurotechnologies, and that they do not end up being reserved for a minority. This issue remains rather vague, however.

“How can we ensure equitable access to this technology?” Maldonado asks. “The legal texts are not clear enough on this point.”

Audrey Azoulay: Making the most of artificial intelligence, The UNESCO Courier, July-September 2018