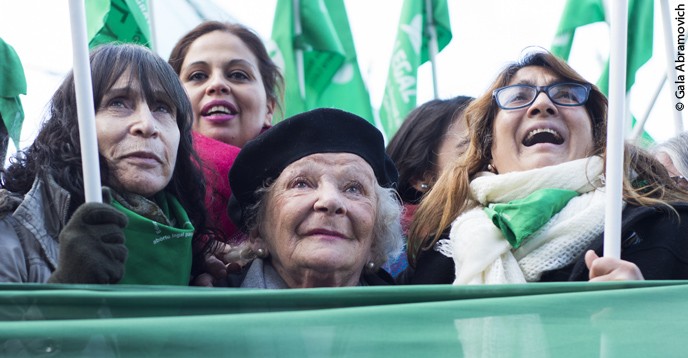 Nelly Minyersky with activists from the National Campaign for the Legal, Safe and Free Right of Abortion, outside the National Congress of Argentina on 13 June 2018, during a debate on the law to legalize abortion.

Through their campaigns to protest gender violence and femicide, such as #NiUnaMenos (Not one less), and their fight for the legalization and decriminalization of abortion, Argentinian women are breaking new ground and transcending borders. The 90-year-old lawyer Nelly Minyersky is one of their most active representatives. So much so that some call her “the green queen”, because of the colour of the scarves worn by supporters of free and safe abortions – who demand, in short, a law “to not die”.

Where does your commitment to human rights come from?

My father emigrated to Argentina from Bessarabia, now Moldova, at the age of 23. His entire family was in Europe, so we lived very intensely through the Second World War. I remember hearing Hitler's voice on the radio – that pungent voice was a very hard thing that marked me, and undoubtedly predisposed me to do what I do.

What about feminism? Did you have role models?

I would be lying if I said that I was inspired by the great figures of the movement. My role models have been independent women. The women in my husband’s family were all professionals – chemists, French teachers... I have always been surrounded by progressive people. I came through the law, and became interested in feminism as part of human rights in general, as I have lived under various dictatorships.

I specialized in family law and began to realize that a woman’s legal incapacity  mainly concerned a married woman. The single woman had very few limitations or constraints, and enjoyed practically all the rights. However, due to the economic model and the desire to preserve the family income, the married woman was far more limited. When I became interested in changing things, I became interested in feminism.

How did the current campaign for the right to abortion in Argentina, in which you are involved, come about?

The campaign for the right to abortion started in 2005, but it had its origins in the Encuentro Nacional de Mujeres (national women's encounters), which was created in 1986, shortly after democracy was restored.* The encounters are spaces for meeting and discussing values, principles and forms of organization, by and for women, and are held every year in a city in Argentina. When they first started, about a thousand of us attended – now, we are more than  60,000 women who attend.

The meetings are held over two and a half days, where all the activity revolves around gender issues – with workshops, plays, craft fairs, and panels on health,  on breast-feeding, and literary debates with a gender perspective. It’s a unique experience that unites different social classes, different ages. In my opinion, women have this particularity – it’s easier for us to get together than for men, even though each one of us has our own political ideas. You get together with municipal workers, with young people from schools… and you breathe joy. These meetings are also pluralistic, so much so that now they want to change their name to “plurinational encounters”, to include our indigenous peoples.

The United Nations Office on Drugs and Crime (UNODC) estimates that more than 50,000 women worldwide are victims of femicide each year. How can we confront this problem?

I have a theory – which I’ll probably never be able to explore in depth – that femicide will decrease as comprehensive sex education advances. The proof is that  in all the countries where they receive this education seriously from a very young age, murder rates due to gender violence are lower. But in many countries, we are years away from getting there.

Why does Argentina, which has legalized same-sex marriage and allows the  free choice of sexual identity, remain opposed to an abortion law?

It is true that in recent years, Argentina has adopted those and many other laws that have granted many rights to women – a comprehensive protection law, the Optional Protocol to the Convention on the Elimination of All Forms of Discrimination against Women**, retirement pensions for housewives, etc. My theory is that egalitarian marriage ultimately means allowing a group of people to enter into an institution that is a model, so they are under social control. But abortion, on the other hand, falls out of the desired model; it is completely disruptive. And it is also undoubtedly one of the most resistant strongholds of patriarchy.

You were one of the drafters of the bill on the decriminalization of abortion approved by the Argentinian Congress in June 2018, but you failed to obtain Senate approval two months later. What does this bill contain?

Our campaign slogan is: “Sexual education to decide, contraceptives to not abort, legal abortion to not die”. These three principles demonstrate that there are solutions. And our proposal advocates the decriminalization of abortion, but also its legalization. The law criminalizing abortion is discriminatory because the women who die – pregnant girls who are forced to be mothers – are the girls and women who belong to the most excluded and vulnerable sections. If abortion is not legalized but simply decriminalized, these sections won’t have the right to decent and safe health services. Between 2007 and 2018, there were seven attempts in Argentina to introduce a bill for the right to abortion, and soon we will make an eighth proposal. In the meantime, the campaign, which brings together more than 500 organizations, persists and continues to work on the issue, which we consider essential, and the right to abortion is experienced and transmitted as a fundamental human right.

What has been the reaction to this bill?

When, in 2018, the debate was finally opened in parliament, a unique phenomenon occurred, an incredible mobilization. We got 1.5 million to 2 million young girls and women marching in the streets to support us, we were invited to speak in secondary schools, where the boys politely asked me if I’d had an abortion. There were debates without screaming. We woke up and we communicated – and this is the most exciting thing – a message that went far beyond abortion. It was a message of freedom, of autonomy. It was thrilling to see these girls, young people, men, wearing the green scarf, which is the symbol of the law's supporters. And that's how we achieved something we had never dreamed of – an agreement between women representatives from opposing political parties who, together, managed to obtain approval for the law – what we call a “half sanction” in Argentina – from the Chamber of Deputies. It was something wonderful, unexpected.

But the law still hasn’t been passed...

The law was rejected by the Senate, but we were short of only seven votes (thirty-eight against, thirty-one in favour) and that was a huge triumph. We didn't lose. We didn't get the law passed, but times are changing. Abortion has been taken out of the dark zone, out of the criminal zone in society’s imagination, it has been un-demonized. And now we talk about sexual and reproductive rights – young people talk about these. That’s how greatly we have advanced. And we have opened a breach, because we are achieving a change in social consciousness. We have won over teenagers and young people, who consider abortion a human right. And other important sectors, because networks of professionals, doctors, nurses, lawyers have also emerged – a real green tidal wave.

After so many decades of work and activism, how do you view feminism at the global level?

There is no doubt that popular movements have succeeded in advancing the feminist movement. But this progress has also provoked a reaction, which is rather hidden, but which works in a permanent way within the United Nations and other international forums. A recent report by the Observatory on the Universality of Rights, Rights at Risk, very clearly demonstrates how the most extreme supporters of various religions are joining forces with the most conservative sectors to try to return, on gender issues, to before the Beijing Conference (1995). The term “gender ideology” was coined there, for example. It is a movement that is advancing every day, and which, by the way, accuses UNICEF, or you at UNESCO, of promoting this supposed ideology. We must remain alert.

*Democracy was restored in Argentina in October 1983, following a bloody dictatorship that began in 1976.
**The Optional Protocol to the Convention on the Elimination of All Forms of Discrimination against Women, ratified by Argentina in 2007, allows individuals and associations to file complaints of violations of the Convention to the Committee on the Elimination of Discrimination against Women (CEDAW) when they do not obtain prompt and effective judicial or administrative protection in their country, and to the Committee to open an ex-officio investigation procedure for serious or systematic violations of the Convention.
Nelly Minyersky

Born in 1929 in San Miguel de Tucumán, north-west Argentina, Nelly Minyersky is one of the most prominent women's rights activists in her country. She was named an illustrious citizen of the city of Buenos Aires in 2010 and has presided over the Women's Parliament since 2017. She was the first woman president of the Asociación de Abogados de Buenos Aires (Buenos Aires Bar Association) and of the Tribunal de Disciplina del Colegio Público de Abogados de la Capital Federal (Disciplinary Tribunal of the Buenos Aires public Bar Association).