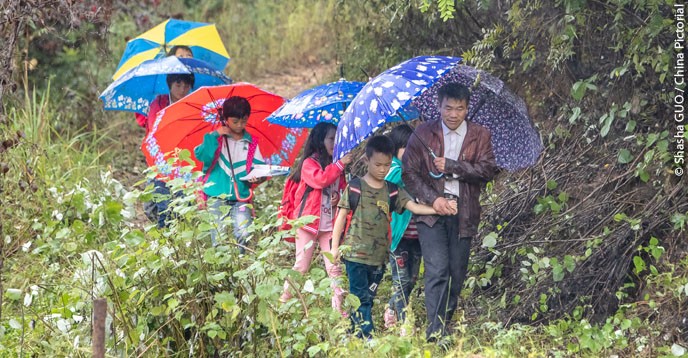 In the absence of parents, most of whom work far from home, it is the teacher who accompanies the students each morning, up the steep path to school.

The people who live in Heihumiao, in central China’s Henan province, often dream about leaving the mountains to find a better life in the city. Zhang Yugun also left. But once he graduated, he chose to return to the village where he grew up – to give the children a fighting chance.

Setting off from Zhenping county and heading along the mountain road to the peak that rises 1,600 metres above sea level, you can see the Heihumiao primary school, nestled in the valley below. This is where Zhang Yugun has been teaching for the past eighteen years.

The village of Heihumiao is far away from everything. In earlier times, inhabitants who wanted to leave the mountain had to follow the trails carved by cattle and sheep on the ridge, climb over the hilltop, and then pass through the precipitous hillside of Bali. The mountain road is so rugged, it is impossible to ride a bicycle through it – it would take at least five hours to climb the hill, with no transportation available. The harsh conditions meant that few teachers were keen to take up positions here.

"If teachers from outside won’t come here, and the students we train won’t stay, who would be responsible for the education of the children here?" asks Zhang. This question haunted him after he visited his old school, accompanied by the former principal, Wu Longqi. Even though he hesitated, due to the low wages and the tough environment, he finally decided to stay. He promised Wu that he would transform the lives of the children,and he has kept his word.

Carrying hope on a shoulder pole

Books, textbooks, pencils and erasers – the school needed teaching materials, but also basic food supplies, such as oil, salt, vinegar, vegetables, rice. All these things had to be carried in from the city. From 2001 to 2006, Zhang carried these supplies all the way up the mountain, using baskets tied to a shoulder pole he inherited from Wu. This was the only way to make it possible for the children to attend school, and to give them the opportunity to leave the mountain if they chose to.

One winter day, the mountain road was too slippery to walk on. It was almost the first day of school, and the children’s textbooks were still in Gaoqiu, a town more than thirty kilometres away. Faced with this challenge, Zhang and another teacher rushed to the town in the early morning, carrying the shoulder pole through muddy roads. When they returned to the school, weighed down with their load of textbooks, they were almost completely covered in mud. But the books remained clean.

Conditions have improved in recent years. Since 2006, a concrete road provides access to the village, breaking its isolation. Buses have started plying the route occasionally, since the winter of 2017. Zhang now drives a motorcycle to ferry textbooks and daily necessities to the village – he is often weighed down by over a hundred kilos. But conditions still remain difficult. Since the teacher’s return, four of his motorcycles have broken down, and he has had to replace countless tires.

Zhang refuses to complain, however. “I think all my efforts have been worthwhile, because the students I taught were able to go out of the mountains,” he says. Before he became a teacher in the village, he was the only student from Heihumiao to have attended college – the number has since increased to twenty-two.

Due to the lack of teachers, Zhang has trained himself to take on many roles. He is both the principal and a teacher of mathematics and ethical education. Over the last eighteen years, he has also acquired skills that go well beyond the scope of his initial training. In addition to teaching, he doubles up as a cook, a tailor after school, and even a nurse, in emergencies.

But his role of helping students goes even further. Most of the parents of the children work away from home, and Zhang understands the ordeals faced by each of the families. “During all these years, none of the students in our village have dropped out of school because of poverty, especially the girls,” the head of the village said. Zhang persuaded the parents of students whose families live far away from the school, to let their children live and eat on the school premises. Assisted by his wife,  he has helped the students wash and mend their clothes, and has taken care of all their daily needs. With his meagre income, he has financed more than 300 students so they could continue their studies.”

Fortunately, with the help of the education department, conditions at the school have continued to improve. With fifty-one students currently enrolled, the school now has new dormitory buildings, canteens, playgrounds, and computer classrooms.

Influenced and inspired by Zhang, four retired teachers have decided to return to the mountains to resume teaching. Encouraged by social recruitment, there are eleven teachers at the school today. “As long as children are there, so will we be,” some of them said.