To demonstrate a commitment that goes far beyond what is generally required by the profession, whether by choice or because the context demands it. This is why the teachers featured in this issue of the Courier – on the occasion of  World Teachers' Day, celebrated on  5 October – have in common. 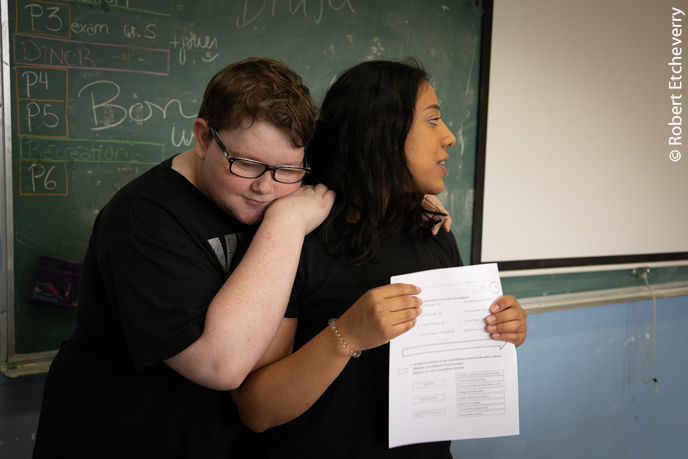 Photo: A unique school in Montreal, the Centre d'intégration scolaire welcomes students with serious learning difficulties. To restore their desire to learn, teachers must show empathy, but also creativity.

Located between two pillars of the elevated metro in New Delhi, India, is the school founded by Rajesh Kumar Sharma. It provides free schooling to children from the surrounding slums who cannot afford to go to school, and extra tuition to those who can, but need more help. Saturnin Serge Ngoma also works in precarious conditions. At his La Poudrière school in Brazzaville, Congo, the seventy-six students he teaches every day have to share desks and textbooks. Zhang Yugun has given up the comforts of city living. For the past eighteen years he has been teaching in a remote school, nestled deep in the mountains of Henan province, China.

Building trust is essential when teachers are faced with children who have had troubled lives, insists Mohamed Sidibay, a former child soldier from Sierra Leone. This is the kind of patient work carried out by teachers at the Centre d’intégration scolaire in Montreal, Canada, with students who cannot cope with the mainstream school system. Or, in a very different context, the students at the Juan Luis Vives school, which is located inside the Valparaiso prison in Chile.

It is an archivist’s dream to find a forgotten document. This is exactly what happened when UNESCO’s audio-visual collections were transferred to the Organization’s archives. In one of the drawers was an album of unpublished photographs – accompanied by detailed notes – by the great photographer David “Chim” Seymour, co-founder of the Magnum agency. The story of this discovery of Seymour’s words and images appears in the Zoom section.

Modern cities, with their asphalt roads and concrete and glass towers, are being hit hard by the increasingly frequent heat-waves of recent years. To design a modern habitat that is better adapted to extreme temperatures, why not take inspiration from the traditional architecture of countries in the Gulf, Middle East and Africa? This is what Professor Amin Al-Habaibeh recommends in the Ideas pages.

At 90 years of age, Nelly Minyersky is a leading figure in the movement against gender-based violence and femicide in Argentina. The green queen, as she is named, after the colour of the scarf worn by advocates of free and safe abortion, is Our Guest.

The Current Affairs section in this issue features two stories. The first is about the  inhabitants of Quehue, Peru, who, every year in June, take part in an ancient ritual to restore the rope bridge that connects the two banks of the Apurímac river. The second article tells the story of the original ship-mates who arrived on the Clotilda, the last American slave ship, and of their descendants who continue to live in Alabama, in the United States, even today.

A second-chance school in Montreal
The school under a bridge in New Delhi
Mohamed Sidibay: The role of teachers is to restore our confidence
Congo: A class of seventy-six
Teach Me If You Can: From classrooms to the big screen
Teaching behind bars in Valparaiso
A teacher brings hope to a remote Chinese village

Architectural lessons for the future, via the past