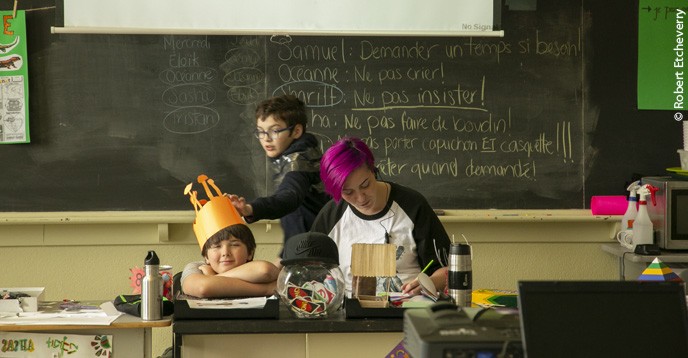 Taking a break with educator Mélanie Bélanger. In each classroom, a specialist is present to help the teacher manage the students' emotions.

To succeed where traditional schools have failed. This is the challenge that teachers at the Centre d'intégration scolaire (Centre for academic integration, CIS) in Montreal, Canada, face every day. The French-language school takes in students whose educational paths have been rocky – gaining their trust is a prerequisite for any learning.

With its brick walls, drawings hanging on the walls and worn-out lockers, CIS looks like any other school. Classrooms open onto rows of desks, aligned and facing a blackboard. From eight in the morning, students noisily invade the wide staircase that leads to the top floors. But the comparison ends there.

This is because the school, located in the city’s Rosemont district, has been welcoming vulnerable students – students with learning disabilities or psychological problems – for nearly fifty years. Many of them have chaotic backgrounds and complicated family histories, and some have even been in conflict with the law. Aged from 6 to 18, many students have also had a difficult past in schools they have attended. They have experienced academic failure, successive expulsions or been relegated to the back of the classroom in special programmes for difficult students. CIS is a new beginning for them – on a completely different basis.

At the end of June, a week before the summer holidays, the atmosphere is charged. The grade six students are preparing to take their “social universe” exam, a subject taught at the elementary and secondary levels, which covers the social and political history of Quebec. The children fidget in their seats.

Their young teacher, Kénia Alvarado-Lara, announces that the questions will focus on the Roaring Twenties [the decade of the 1920s in Western culture] and the baby boom [a period marked by a significant increase in the birth rate, coined after the one that occurred in the United States and other parts of the world following the Second World War].

Dull noises are then heard in the next classroom. A few staff members – all connected by walkie-talkie – head to the classroom, ready to intervene. Inside, the teachers have already managed to calm the young boy who was hitting a wall. He lies on a small mattress in a space away from the others and two of the interveners stay with him to soothe him.

Tossed from one school to another

These outbursts are not uncommon, especially at the end of the year. “Many of these youth  suffer from attachment disorders,” says the principal, Ysabelle Chouinard, who has taught at the school for seventeen years. “When the holidays arrive, the students are anxious. They don’t know what to expect and are afraid of parting from their teacher.” There is an immense need for affection in some of these young people, who have been tossed from one school to another and from one family to another.

The teachers have to deal with sudden changes in behaviour, emotional distress and violence, which sometimes requires police intervention. If the school is a little too big for the eighty-four students it takes in, it is because the unpredictable behaviour, yelling and fighting do not allow the school to share the premises with other students.

Working at CIS requires a solid constitution. In addition to the principal, social workers, a dozen teachers and specialized educators are responsible for this unique school in Quebec. Many teachers or trainees who come with the idea of helping young people resolve their problems leave after a few months, bewildered.

Alvarado-Lara admits that she has painful memories of her first year in the school. “My class consisted of sixteen students from Secondary I [grade seven in Quebec], who were very difficult cases. In a traditional school, it’s already a difficult age. But with them, I also had to face insults, physical violence and fights. I cried a lot and felt personally targeted by the insults. I couldn't sleep.”

Over time, Alvarado-Lara has found ways to respond to these demanding students. “The relationships I’ve managed to develop with these young people, have allowed me to overcome all the challenges,” she continues. “We have developed a mutual respect over time. The other crucial factor was that my director trusted me. When I couldn't take it anymore, she’d encourage me to take a day off. It's important to take care of yourself.”

Roxanne Gagnon-Houle, who has been teaching at CIS for ten years, has also learned to deal with strong emotions. She loves her work and the students love her. She only doubted this once – the day her ribs were broken in a fight.  “At the secondary school level, I had students who had experienced homelessness, drug addiction and psychiatric disorders. The only way to intervene is to build a relationship of trust. You have to be honest and make a sincere commitment to them,” she says.

Honesty. Trust. Respect. Empathy. These words are often repeated by the teachers and educators at CIS. Without these patiently constructed relationships with students, nothing is possible.

“You cannot approach a student with Oppositional Defiant Disorder (ODD) in the same way as you would a student with an attachment disorder. But in any case, you have to be reassuring. If a student insults me, I have to get beyond that. There are days when a child is incapable of verbalizing what he feels. I need to spend some time with him. A young person who spits or bites is a child who is trying to tell me something,” explains Luc Fugère, a specialized educator. He has worked at the school for twenty-eight years and his role is to help young people manage their emotions.

The teachers at CIS have all completed four years of university training in special education – a speciality that equips them to teach children with special needs.

Rekindling the desire to learn

Teachers have been trained to identify certain disorders, to respect the learning rhythm of a dyslexic child and to manage a classroom. But not everything can be learned at university. To restore the desire to learn in these youth who have a troubled relationship with school, it is also necessary to demonstrate initiative and creativity.

“When I arrived,” says Alvarado-Lara, “I had only a blackboard, chalk and books. What could I do with these? I was convinced I couldn’t work here as I would in an ordinary school.” She then borrowed a projector from her brother and asked the principal for a laptop. She prepared interactive lessons, adding videos and photos, and succeeded in capturing the attention of her students. “I no longer had to do any class management. I integrated this method for each subject and gave the students pencils to take notes. It worked!” she enthuses.

Emma Chouinard-Cintrao, a third-year teacher, is completing her university degree in special education. She has been teaching at CIS for only a few months. To encourage learning, she takes every opportunity to think outside the box – by using educational games. To stimulate a taste for mathematics, she organizes cake and lemonade sales outside the school to familiarize students with fractions.

Pet therapy, developed with the help of specialists, is also part of the school’s therapeutic arsenal. Several animals have been included in classrooms – guinea pigs for the youngest children, a trio of rats in the first year of primary school, and ferrets and rabbits in the first year of secondary school. Pet therapy days are also held with specialists, to help some students to communicate. Some shy children learn to become more assertive when a dog obeys their commands, for instance.

These efforts are paying off. Andrew, 15, who was dismissed at the end of elementary school, attended several anger management sessions until he felt better. “I'm impulsive and when I get angry, I hit out. Here, I was helped to find ways to change,” he says.

His testimony is echoed by Joé, 12. “I have a behavioural problem. In my old school, I used to fight all the time. Here, there are people to supervise us when there are fights.”

This painstaking work with students to allow them to express themselves and to channel their aggressiveness, makes learning possible. “At first, I felt I was teaching for nothing,” explains Alvarado-Lara. “I thought they had too many behavioural problems to progress academically. But in fact, they’ve advanced very far in developing their skills. There are so many ways to teach differently.”

“The younger the students are when they arrive, the more successful they will be in returning to mainstream school,” says Chouinard. The principal cites cases of students who have flourished after leaving CIS – such as Stéphanie, who earned a master’s degree in communication, or another student who went on to join a professional basketball team in the United States. “We don't necessarily aim for university studies for all,” she stresses. “The important thing is for students to find fulfilment. Leading them towards their adult lives already means a lot.”