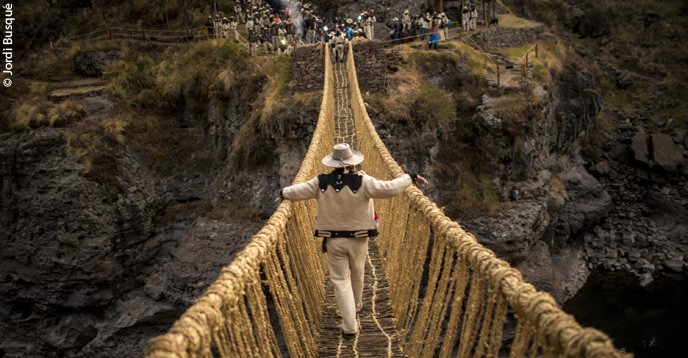 No more than four people are allowed to be on the structure simultaneously.

Every year in the first week of June, the inhabitants of Peru’s Quehue district gather to restore the rope suspension bridge that connects the two banks of the Apurímac river. This centuries-old secular Andean tradition has been inscribed on the Representative List of the Intangible Cultural Heritage of Humanity since 2013.

It takes about four hours of cautious driving on winding roads to reach Quehue from Cusco. In the first week of June 2019, as the rainy season ends, this village, located in the southern Andes in Peru, is about to experience a very special moment. As is customary at this time each year, the inhabitants take part in a centuries-old ritual that lasts three days: the restoration of the Q'eswachaka rope suspension bridge.

This bridge is built over the Quehue gorge of the Apurímac (which means “oracle of the mountain god” in Quechua) river. It connects the Huinchiri, Chaupibanda and Chocayhua communities, which live on the left bank, to the Qollana Quehue community on the right bank. It is the last remaining bridge made of vegetable fibres in Peru. A symbol of the link between the inhabitants and nature, their traditions and their history, Q'eswachaka is considered sacred.

A few days before the ritual begins, the inhabitants cut q’oya, a hardy grass that grows in the humid highlands of the Andes. It is then twisted and extended, to form q'eswa, a long cord. The villagers learn how to weave the fibres from an early age. Sitting on a sidewalk in the village, a woman weaves one of these ropes with amazing dexterity. Another beats the grass with a round stone and then soaks it in water from the river, to make it more pliable. Everything must be ready for the next day, when the reconstruction of the bridge begins.

A remarkable network of roads

The construction, which uses a technique that is over 600 years old, is testimony to one of the  most remarkable achievements of the Inca civilization. They built a network of roads – the Qhapaq Ñan – to connect their vast territories. This could only be achieved by challenging the rugged geography of Peru, crossed by the deep gorges and canyons created by the rivers. As the country has relatively high seismic activity, the flexibility provided by rope suspension bridges was an advantage. The downside was that these bridges were less resistant to bad weather than stone bridges. In a climate where it rains almost every day during the course of several months, the ropes eventually deteriorate, and the bridges have to be reconstructed periodically. Although the bridge is no longer the only road that links the two banks of the Apurímac, the tradition continues year after year.

During the first day of the reconstruction, men gather around the old bridge and weave the smaller ropes – woven by the women – into bigger ones. The head of each household brings a q'eswa, about seventy metres long. The roads leading to the bridge are packed with motorcycles loaded with ropes.

A traditional master of ceremonies, called paqo, presents offerings to the apus, the mountain spirits that are believed to protect the locals. A small altar, on which llama fetuses, corn-cobs and other ritual objects are placed, is put up near the bridge. The elder men, acting as traditional priests, offer alcohol to the men participating in the reconstruction. A sheep has been sacrificed to the apus, and its heart is burnt in a small fire maintained at the foot of the bridge. The priests want to make sure that the workers are protected by the gods and that no accidents occur during the reconstruction.

The ropes are installed on the second day, once the old bridge has been detached, and falls into the river, where it is carried by the current and floats downstream. It will simply decompose, as it is made only of grass. Tradition dictates that only men are allowed to work on the actual reconstruction. The women remain in the upper part of the gorge, weaving the smaller ropes. The main support of the bridge comes from six large three-ply ropes, each about a foot thick, made up of about 120 thinner ropes. Four of the large ropes will form the floor of the bridge, while the other two serve as handrails. All six ropes are securely attached to large anchors made of carved stone, on either side of the canyon.

Giving these heavy ropes the necessary tension, by human traction alone, takes up most of  the second day. The pulling is done in rhythm, according to the instructions of the lead architects. The various stages of construction are supervised by the elders and two chakaruwaq, specialized craftsmen whose weaving techniques are passed down from generation to generation. This reconstruction draws on mink'a, a pre-Columbian tradition of community service, which consists of Andean farmers carrying out important work, the benefits of which are shared by the entire community.

On the third day, a handful of men who have no fear of heights, walk the length of the structure, attaching small ropes from the handrail to the floor of the bridge. This makes it possible for everyone to safely cross the bridge. Two groups start on either side of the bridge, and eventually meet at its centre. When the last rope is in place and the bridge is finally ready, the workers raise their arms, causing the crowd to cheer loudly.

The workers are the first to use the new bridge, but everybody is eager to emulate them. For safety reasons, no more than four people are allowed to cross the structure at any one time. The crowd is large, and it takes a long time before everyone has crossed the gorge. No modern materials, tools or machines have been used during the entire reconstruction process of the bridge – only ropes of grass and human power.

The annual rebuilding ritual ends with festivities in which all the inhabitants participate. A stage has been set up and a music group plays traditional songs from the region. Schoolchildren from neighbouring villages take part in a dance competition. In a few years, it will be these boys and girls who will take over, to rebuild the Q'eswachaka suspension bridge.

This article is published on the occasion of the 14th session of the Intergovernmental Committee for the Safeguarding of the Intangible Cultural Heritage, held from 9 December to 14 December 2019 in Bogota, Colombia.