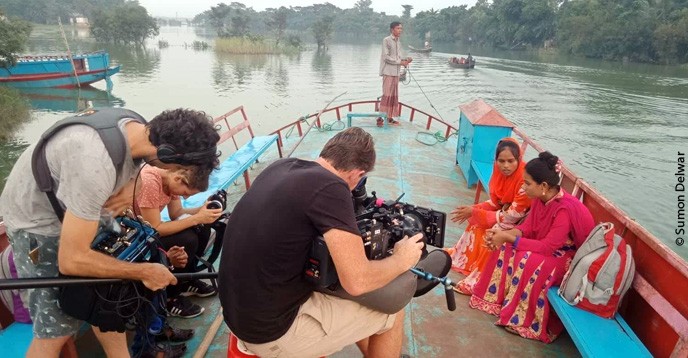 A still from the shooting of the documentary, Teach Me If You Can. Taslima, a Bangladeshi teacher, works on board a floating school, the only way to continue to teach students in a country hit hard by rising waters.

“To give back to teachers their status as life’s great heroes, because they change the destinies of children, and they change the future of the world”. This is the ambitious goal of  Teach Me If You Can (working title), a feature-length documentary currently being produced by Winds, a French film production company. The idea, inspired by UNESCO – which is a partner in the film – is to present several portraits of teachers across the world who go above and beyond their job requirements, and to show the universal nature of their commitment.

Sandrine in Burkina Faso, Taslima in Bangladesh and Svetlana in Siberia (Russia) are each heroines in their own way. The three teachers featured in the film, whose vocation is part of who they are, overcome many obstacles to accomplish their tasks. These include poor infrastructure, geographical isolation, extreme climate conditions, interruptions in teaching, cultural problems and nomadism. Resilient and prepared to make sacrifices, these women, like millions of other teachers around the world, live each day as an adventure – mainly educational, but also human and physical.

Svetlana, for example, made the difficult choice of moving away from her children in order to teach in the camps of Evenk reindeer herders, an indigenous people in eastern Siberia. Her nomadic school is set up on a sled, and is the only one of its kind in the world. Accompanied by her husband, also a reindeer herder, she follows the nomads of the Siberian taiga – providing their children with an education wherever they go.

Barthélémy Fougea, the film's producer, is still surprised at how isolated the region is. “In my thirty-year career, I have never had such long production trips,”  he says. It took the film crew seven days just to get to the location, first by plane, then by train and truck and finally by snowmobile. Another challenge underlies Svetlana’s commitment – she hopes the nomadic children are able to be both Russian and Evenk at the same time. This is also a personal challenge – the teacher, born in the Soviet era, is herself Evenk and was sent away to boarding school, which distanced her from the traditions of her people.

Directed by French director and cinematographer Émilie Thérond, this feature-length film is currently in post-production, and will be released in 2020. It is part of an international transmedia project that include a television series, books, children's books and an exhibition, among other initiatives. Simultaneously, education projects are being funded through On the Way to School, an association named after the award-winning film produced by Winds in 2013, also in partnership with UNESCO.