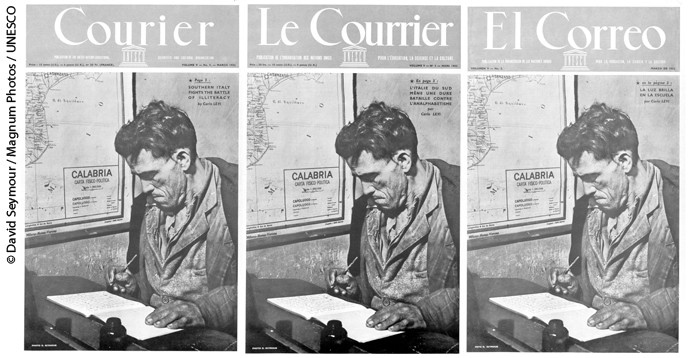 David Seymour’s photo of an elderly peasant learning to write, which appeared on the cover of the UNESCO Courier published in March 1952. Taken in 1950, this photograph is part of a series commissioned by UNESCO to illustrate the campaign against illiteracy in southern Italy.

It all began in the autumn of 2017, with the exploration of UNESCO's audiovisual collections, after their transfer to the Organization's archives. Most of the collections had barely been indexed in their almost seventy years of existence. Walking through these archives was a bit like visiting Jorges Luis Borges’ The Library of Babel. With thousands of documents in the archives, the only way to get an idea of how the collection was organized, was simply to open the drawers of the many old filing cabinets and take a look inside.

It was by opening one of these drawers that we made an amazing discovery: an unpublished album of thirty-eight contact sheets and accompanying texts by David “Chim” Seymour, one of the greatest photographers of the twentieth century.  In 1947, Seymour, along with Henri-Cartier Bresson, Robert Capa, George Rodger and other leading photographers, co-founded the Magnum photography cooperative – now known as Magnum Photos.

In 1950, UNESCO commissioned Seymour to report on a major campaign to fight illiteracy in southern Italy. The UNESCO Courier published an article on the subject in March 1952, with Seymour’s photos and the text by Carlo Levi, author of the famous 1945 novel, Christ stopped at Eboli. The book is based on what the Italian intellectual experienced when he was exiled in the 1930s by the fascist authorities to a remote region, known as Basilicata today. It tells the story of the lives of its inhabitants, their customs, their beliefs and the misery they struggled through.

Sixty-seven years later, on the occasion of the publication of the book They Did Not Stop at Eboli: UNESCO and the Campaign against Illiteracy in a Reportage by David “Chim” Seymour and Texts by Carlo Levi (1950), which reproduces the entirety of the Seymour album, accompanied by analytical essays, the Courier presents another perspective of the photographer's work.

The historical context of Seymour's reportage was the fight against illiteracy led by the post-war Italian government and non-governmental associations such as the Unione Nazionale per la Lotta contro l'Analfabetismo (UNLA, the National League for the struggle against illiteracy). Illiteracy was rampant in the country’s south. In some regions, like Calabria, where Seymour travelled for his reportage, nearly fifty per cent of the population was illiterate at the time.

To combat this scourge, UNLA has contributed to the creation of many schools offering basic literacy classes for children and adults, since it was founded in 1947. The organization’s most original initiative has been the creation of People’s Cultural Centres across the country. Under the direction of an UNLA teacher, adults who have already benefited from literacy classes are able to continue their education by asking questions about their practical lives, but also more theoretical questions. The UNLA teacher tried to answer them with the support of  professionals in the community – such as doctors, pharmacists, veterinarians, parish priests, etc.

UNESCO first took great interest in, and then supported the Italian campaign – clearly considering it very important, since the report was commissioned from one of the great photographers of the time.

For his reportage, Seymour not only took hundreds of photos, but also wrote very detailed notes to accompany them. He provided distinct storylines or themes for groups of photographs, and even made suggestions of possible editorial selections. Some, but not all, of these choices were followed in the 1952 Courier article, and only a small part of the text was used. Sixty-seven years later, it is time to do justice to what Seymour noted.

For instance, very little attention was given to Seymour's detailed observations on the condition of women in the context being analysed. In particular, in the text accompanying another series of photos of women learning to read (including the photo of the woman learning to read with her daughter reproduced in the 1952 article), Seymour highlights the linking of the literacy campaign with the application of equal opportunities measures to promote social progress.

The 1952 Courier article also reproduced one of Seymour's photos of women carrying loads on their heads. (In this article, we have reproduced another photo from this series [p. 26], digitized for They Did Not Stop at Eboli.) However, the caption accompanying this photo restricted its role. It was used to illustrate the fact that the workers had to be taught at evening classes, after a hard day in the fields.

This mise en abyme of the Courier illustrates how UNESCO's archives continue to shed light on past campaigns that remain of great relevance today – while highlighting how these campaigns were brought to the attention of readers.